An extract from The Ambiguity of a Suicide

I host today an extract from chapter 3 of  The Ambiguity of Suicide by Giuseppe Cafiero as part of the blog tour. 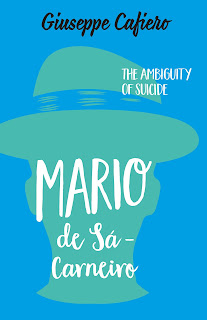 Mr Craston had sent very precise, albeit disorganised, notes. Many indications on how to undertake that unwieldy investigative task. Firstly, exchanging impressions on the life of Mário de Sá-Carneiro with some of Fernando Pessoa’s supposed friends. Hence it was necessary to identify with whom it was possible to trade ideas. Then to determine with what pretexts and verbal schemes necessary to ask specific questions about the life that Mário had led in Lisbon. It was also appropriate to obtain some information about the alleged suicide, in Paris, of that young man who had died at just 26 years of age.
Mário de Sá-Carneiro was a poet quite unknown to most people, remarked one of Mr Craston’s notes. To some instead he was known as a person with odd propensities to theatricalisation.
However, the physical features were certain. Information received from those who knew him or thought they knew him well. All carefully transcribed by Mr Craston. Large, clumsy and shy. Like a stout sphinx. A part that divided his hair almost in two. His torso enclosed in a double-breasted coat that seemed to strangle him while he moved uncertainly about the streets of Lisbon with a lost, painful look, marked by tedious regrets.
The friendship that bound Mário to Fernando Pessoa was indisputable.A very extravagant friend since it was rumoured that he had had the courage to write the verses: “Perdi-me dentro de mim / Porque eu era labirinto, / E hoje, quando me sinto, / É com saudades de mim.25”
Never take for granted what belonged only to hearsay. And if that were true, it was not certain that it might be a sign of principal attention. Imagination and ambiguity often deceived. Rumours and truths might or might not have been the face of the same coin. And thus friendships. In truth, only devious
Gossip seemed to have something to say about this. Or specular games. Multiple specular games. Other lives, in short. Lives that belonged and did not belong to those who offered themselves so ambiguously in telling stories. And on and on using their talents for not at all original propositions.
Wounds from resolute and determined resentments. Weird anomalies. Also moody statements.
Sed Vulgo Dixit. Amen.
Mr Craston had also advised great caution.
The only certainty was that ineluctable confirmation had come from the Hôtel de Nice in Paris that Mário de Sá-Carneiro, born in Lisbon on 19 May 1890, and who was staying in that hotel, had really died, by presumed suicide, on 26 April 1916. A certain José Baptiste d’Araújo, a Portuguese shady dealer, and a police commissioner had certified his death. The funeral was held on the 29th. A simple fir coffin, “covered with a black cloth with silver fringes 26” was accompanied on a modest hearse to the Pantin cemetery, just beyond Boulevard Sérurie outside the Alemagne gate, by a small procession of friends. Perhaps just three. 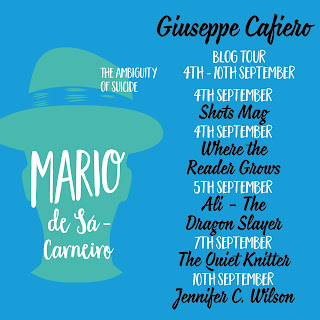 MÁRIO DE SÁ-CARNEIRO: The Ambiguity of a Suicide by Giuseppe Cafiero (Clink Street Publishing)
The apparent suicide in 1916 of the writer Mário de Sá-Carneiro causes his friend, the poet Fernando Pessoa, great distress. Pessoa feels compelled to trace Sá-Carneiro's final movements, to understand what could have caused him to lose all hope.  Exploring byways of the imagination and ambiguity with the investigator David Mondine and Dr. Abílio Fernandes Quaresma, solver of enigmas, the three men decide to uncover the conclusive certainties which led Mário to poison himself.  These suicide investigators travel to Lisbon - Mário's birthplace - and to Paris, talking to strangers and friends who might shed light on the poet's mysterious and sudden decline. As the city wrestles with the grief and tumult of war, the men hold court at the cafes and bistros Mário would have frequented. Their witty, enigmatic and sometimes obscure conversations illuminate the friendship between Mário and Fernando Pessoa, their poetry and their literary ambitions, revealing the tragic end of one of the founders of Portuguese modernism.