CRAIG SISTERSON ON FRESH BLOOD FROM THE ENDS OF THE EARTH

Next month the winners of the 2017 Ngaio Marsh Awards will be announced in Christchurch, New Zealand, the hometown of Dame Ngaio Marsh, one of the four Queens of Crime of the Golden Age of Detective Fiction.

Although Dame Ngaio set most of her Inspector Alleyn tales (32 novels and several short stories) in Britain, she was ‘a Kiwi’, a colonial author from the far ends of the Empire.

So it’s only appropriate that the literary prizes for New Zealand crime, mystery, and thriller writing, which I helped establish back in 2010, bear her name and image.

From the very beginning, we’ve been proud to have an association with Shots! Magazine: columnist Mike Ripley brought his expertise to our nascent awards as one of the founding judges, and in recent years Ayo Onatade has been part of the international judging panel.

So I’m very glad to visiting Shots! blog today as part of our inaugural Ngaio Marsh Awards blog tour, and sharing with you all some more information about some of our finalists.

It’s been great to see the growth in New Zealand crime writing over the past few years, with several dozen new authors joining the #yeahnoir ranks (the term for Kiwi crime writing), both debut authors and authors from other genres making a switch to the dark side.

Today, I thought I’d share a bit more about our finalists in the Best First Novel category, which celebrates the best crime writing from first-time authors. We had a record number of entrants this year, and lots of good reads didn’t make the finalist list. But here’s a closer look at our ‘final five’; all great new voices with tales that span the crime writing spectrum.

This powerful and fascinating tale starts with a cliff-hanger, literally. Wheelchair-bound main character Finn is hanging from the side of a cliff above roaring seas in New Zealand’s rural south. He’d moved from the big city after wrecking his marriage, then his spinal column, with his drinking. Contemplating ending it all, he muddles along thanks to a blunt counsellor, new friends, and a growing obsession to uncover what happened to a father and daughter who vanished years before from the remote cottage in which Finn now lives.  Bell really hits the ground running with his debut; he has a strong narrative voice that brings plenty of freshness. There’s a zing to his writing, and he’s unafraid to take a deep-dive into the psychological, as Finn grapples with the demons in his own mind. Is he worthless, a ‘dead lemon’ merely bringing down those around him? Or does he have something to offer?


RED HERRING by Jonothan Cullinane (HarperCollins)
Kiwi filmmaker Cullinane blends mystery and history in this terrific debut. Readers are plunged headlong into 1950s New Zealand, where global politics are being played out in clashes between unions and business interests on the waterfront. The shadow of the Second World War, with its death and deprivation, still lingers. A growing spectre of Communism domino-ing its way down through Asia looms. New Zealand may be small and far away, but to plenty of power brokers it’s a battleground. One they want to control.  Into this murky world steps Johnny Molloy, a soldier turned private eye who leaned hard left in the past. Hired to track a supposedly dead man, he crosses paths with an ambitious reporter looking to make her mark, and the pair find themselves knee-deep in the muck. Cullinane weaves a fascinating noir tale textured by lesser-known aspects of Kiwi history. There's a muscularity and dry humour to his storytelling. A page-turner with much more.


THE ICE SHROUD by Gordon Ell (Bush Press)
Distinguished wildlife photographer Gordon Ell brings his passion for nature to his first swing at fiction, setting this intriguing murder mystery against the backdrop of New Zealand’s spectacular Southern Lakes region. A woman’s body spotted by jet-boating tourists, half-frozen in a river canyon, is an abrupt introduction for new CIB head DS Malcolm Buchan. Especially when he recognises the woman; a fact he hides from his new colleagues.  As Buchan and his team investigate, they cross paths with powerful locals, people that feel their wealth and influence should reign, and whatever they do in private is no-one else’s business. Ell infuses his tale with a great sense of place, while also delivering with interesting characters and a fascinating storyline. A bit of a modern Kiwi take on a classic British village murder mystery, with detectives stymied by secretive locals and the wealthy elite. Full of suspects and red herrings, Ell’s debut is a heartily enjoyable read set in a gorgeous location.


THE STUDENT BODY by Simon Wyatt (Mary Egan Publishing)
Former detective Wyatt brings all his investigative experience to bear in this page-turning police procedural set on the ‘wild west coast’ of New Zealand’s biggest city, a place of beaches and bushlands on the outskirts of the high-rise CBD and its suburban sprawl.  A popular teenager is strangled at a high school camp, and newly promoted DS Nick Knight, who jettisoned his legal career to join the police, is thrust into a high-profile investigation. The crime seems sexually motivated, and there are plenty of secrets to unpick among the girl’s family, friends and school teachers, and the wider community. Fans of police procedurals that delve deeply into the inner workings of a police investigation will really enjoy this debut, as Wyatt delivers a real sense of authenticity and lots of detail about how modern police forces operate, issues they have to consider, and the challenges they face.  A fast-paced procedural set on the far side of the world.


DAYS ARE LIKE GRASS by Sue Younger (Eunoia Press)
This is an atypical crime novel, an elegant and emotional read that’s a deep character study and more about the lingering impact of criminal acts, and ongoing mysteries, rather than a traditional detective tale. It’s the kind of book that sticks with you, that days later you’ll still be pondering the choices characters make, the varying outcomes, and questions of justice.
Paediatric surgeon Claire Bowerman reluctantly returns to Auckland from London with her fiancée and teenage daughter, only to find her complicated past flaring up, threatening everything she’s carefully built. When a family refuses medical treatment for their tumour-stricken child, Claire is in the media glare, the sins of her own father resurrected.  Starting with a past crime that haunts the entire book, Younger’s debut is peppered with moments of crime and mystery, and packed with drama with a capital D. It has a lovely page-turning quality, deeply drawn characters, and a nice touch for the contemporary Auckland setting and landscapes. 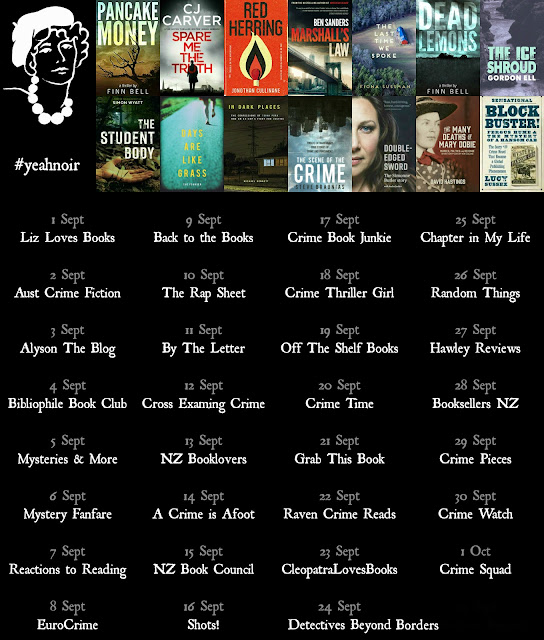