It was all rather unplanned, almost a mistake, but one that now seems so natural, so obvious – so inevitable.

My father and mother wrote their first novel together in 1961, when I was aged eight, and, by the end of the millennium, a further 38 bestsellers had followed. Hence I grew up living in one of the greatest fiction factories of the twentieth century.

The annual book became the focus of the whole family. My chosen profession of teaching became the basis for Twice Shy, while my brother’s racehorse transport company was the inspiration for Driving Force. Even my uncle’s wine-importing business was utilised in Proof, and my architect-cousin was depicted in Decider. My mother became a pilot for Flying Finish, a photographer for Reflex and tried her hand at oil painting for In The Frame. Holidays to South Africa, Russia and Canada became the bases for new stories.

In the year 2000, my parents decided that, after completing their 39th novel, Shattered, they would retire. My father was approaching his 80th birthday and my mother’s health had never been particularly robust since she’d contracted polio in her mid twenties. She’d also had a heart attack in 1995 and had developed Parkinson’s disease on top of her lifelong asthma. It was time to step off the yearly treadmill of delivering a new manuscript every spring – time to take a well-earned rest from the stress of everyone’s expectation.

But Shattered was well named – both my mother and father were exhausted by it and, when I flew out to their Caribbean home to collect the manuscript, it was only two-thirds written with less than a week remaining before the deadline. Hence I rolled up my sleeves and set to work, sitting at my father’s computer night and day to complete the work and deliver it to the publishers on time. But that wasn’t the only part of a Dick Francis novel that I had written. As an A-level physics student I had designed the remote-controlled bomb that destroyed a light aircraft in Rat Race, I wrote the computer program in Twice Shy, and there were plentiful other bits of science related material in numerous books that all had my DNA on them.

So Shattered would be the last Dick Francis novel, at least that is what everyone thought, and not least because my dear mother succumbed to a second heart attack less than a month after the book’s publication. It really had been one book too far.

Five years later, Andrew Hewson, my father’s literary agent, invited me to lunch where he told me we had a problem – my father’s books were going out of print. Not that the stories weren’t good enough but, with no new Dick Francis for five years, everyone was forgetting about them. What we needed, he said, was a new novel, a new hardback, to stimulate the sales of the backlist. I remember looking at him as if he were mad. My father was now in his mid-eighties and had difficulty remembering what he’d had for breakfast – hardly the degree of recall needed to write a full-length novel. And my mother had been dead for five years. There was absolutely no chance.

But Andrew was seeking my permission to ask an existing and established crime writer to write a new ‘Dick Francis Novel’.

Well, I must have had a few glasses of red wine by this stage because I simply said, “Before you ask anyone else, I’d like to have a go.” To his credit, Andrew didn’t roll his eyes and ask me why I believed that someone with no measurable writing experience could pen a novel worthy of the Dick Francis name. Instead he said that he would give me two months to write two chapters and then we would see. He probably thought that, after the two months, he would get the permission he sought.

I went home and set to work – two months to write only two chapters, surely that was easy enough.

I had grown up devouring the Dick Francis books and I reckoned I knew them as well as anyone alive, including my father. But writing one was another matter. My mother had spoken to me often about the rhythm of a sentence and how she strived to produce prose that flowed smoothly off the page. Now I had to do the same. 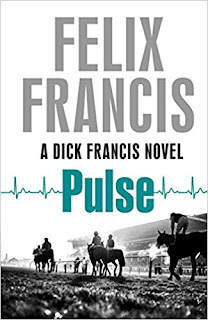 My first decision was to resurrect Sid Halley as my protagonist. Sid was the only recurring main character in the Dick Francis canon, making his first appearance in Odds Against in 1965, returning in Whip Hand in 1979 and then again in Come to Grief in 1995. Now he would make his fourth outing.

Next I needed a plot based around the world of horseracing, in keeping with the Dick Francis custom. At the time, race fixing was in the news with a recent arrest of several jockeys. I decided that race fixing would form the basis of my story. I even settled on a book name, continuing the tradition of Dick Francis double-meaning titles. Now I was ready to start the actual writing.

Six weeks later, I sent my chapters to Andrew Hewson. I was happy with my words but I awaited Andrew’s judgement with a degree of apprehension that I hadn’t experienced since my school-exam days.

“Get on and finish it,” Andrew told me, “and go talk to your father.” The first appeared less daunting than the second. But I gave my dad the two chapters to read and he became very keen on the project. Satisfied and relieved, I set to work completing the manuscript.

Under Orders was published in September 2006 to great fanfare from the publishers but without my name on it anywhere – a situation that was my idea. If the plan was to stimulate the backlist, then it had to be a ‘Dick Francis’ book.

It sold well, of course it did with ‘Dick Francis’ on the cover, but I waited nervously for the reviews. I fully expected them to say that Dick had finally lost his touch, but they didn’t. Quite the reverse, in fact, with most claiming the master was back in the saddle. Everyone was delighted. A book conceived only to give the backlist a boost, suddenly had a life of its own, topping the bestseller lists on both sides of the Atlantic. The publishers wanted another one, so I started writing Dead Heat. I would have been happy for it also to appear with only Dick Francis on the cover but the American publishers insisted that mine should be seen alongside his, albeit in the smallest typeface they could find.

And so it has gone on and here we are in 2017 and my twelfth novel, Pulse, is published this 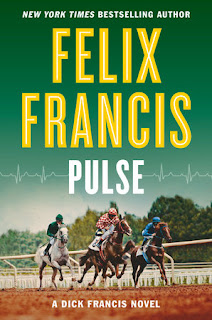 September. Over the years the Dick Francis name has gradually become smaller while mine has grown so that the positions are now completely reversed. But it is my decision to keep calling the books a ‘Dick Francis Novel’ even though the man himself passed away in 2010. I consider that he and my mother are as much a part of my books as I feel a part of theirs. A ‘Dick Francis Novel’ is a brand and I suspect I will go on writing them for as long as I can and for as long as people want to read them.

And did it work?

Very much so. All the Dick Francis books are still in print and still selling strongly. They have even been reissued in new editions with new cover artwork.

Worthy of a commemorative pencil, I'd say. ☺️

Thanks so much for this insight into the Francis canon. I began at age sixteen with Reflex, and then went back to Dead Cert and read them all, some more than once. Sid Halley is my favorite, and I'm impressed with what Felix has done to carry on the tradition. As much as I'm a fan of his father, I hope Felix' books one day don't say A Dick Francis Novel, if only because he is now a writer in his own right, not because I want to ever forget his father.

Lovely to hear your story. I've been reading your family's work since the '80's, and always looking forward to the next one.

I fell in love with the Dick Francis novels in 1964, when I was 8 years old. NERVE was published in Readers Digest Condensed Books, to which my mother subscribed, and I read that one between my arrival home from school and her return from work. I loved it, and sought out his work in every library I could find. Most are now resident in hardback editions on my own home bookshelves. I am so glad that Felix Francis is continuing the family tradition of honorable main characters, fascinating stories, intricate plots, satisfying endings, and the horse racing theme. I hope to read many more "Francis novels" in years to come, and eagerly await each new one, often by re-reading some of my "old favorites." Well done, sir! Many thanks, from a grateful reader in the USA.