Extract from Chapter One of The Fourteenth Letter by Claire Evans 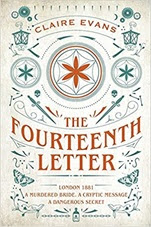 Phoebe Stanbury, blushing, beautiful, and almost in love, greeted the last of her unfamiliar guests and took her seat. As the quartet began to play, she could feel her cheeks paling as her heart retreated to its rightful place; the heart that would, in less than nine and one quarter minutes, pump every ounce of her innocent blood into the flagstones beneath her feet.

The doors to the orangery stood open and a slight chill whis- pered across her skin. She had asked her mother not to close them yet. The garden’s last scent was strong, and she wanted today to be perfect. It was perfect. Benjamin held her hand in his limp grasp. This was their engagement party – something she could still not quite believe, nor, she suspected, could their guests. She saw the question in their eyes: why was Benjamin Raycraft, son of Sir Jasper, marrying such a nobody? He was surely one of the most eligible bachelors in London, not for his form or ability maybe, poor Benjamin, but blood is blood after all. She and her mother had endured their interrogations: are you perhaps related to the Chichester Stanburys? And even, wasn’t it a Phoebe Stanbury who accidentally hit Prince Alfred with an oar at Henley last year? No, then smile, then no again. Phoebe wondered what hushed conversations had brought them all to her mother’s house on the wrong side of the river. Sir Jasper’s pedigree? Or prurient interest in the unknown bride? No matter, her mother had said, they are here.

As the music danced, Phoebe snatched a glance at their guests. Even the Society Editor of The Times, who sat primly towards the back of the room, had smiled in her direction. Now his mouth moved slightly, as if composing the words that would sketch this enchanting evening for his readers. She did not know it then, but Phoebe would never read those words, and he would not write them.

Beyond the open doors, past the cherub fountain that tinkled in the evening sun and down the slope to the river, the curtain of willow trees hid a naked man.

He shivered, his sopping clothes dripping from the branches of the nearest willow. Flat out on the riverbank, he hoped the weakening sun might warm him. He could feel his wet back begin to liquefy the hard surface of the mud beneath him, releasing the earthy smell of decay that the early summer heat had yet to eliminate. It felt appropriate that he should smell like this, of nature, of life and death. Today, he would give the gift of one by bestowing the horror of the other. Today he would right the wrong, the terrible aberration taking place in the house of swirling music and perfume. He would bring the stink of corrosion and finally they would know what had been under their noses: a secret, rotting slowly in the ground for so long.

He rolled on to his front and covered his body with the resurrected muck of the riverbank, pulling it through his pale hair and smearing his face and neck with the rich juice of the earth. He dipped his hand into the chill of the river and wiped some of the mud away, revealing the tattoos that marked his arms and chest. It was important that everyone should see them, particularly the girl. He reached for the leather satchel that hung from the willow bough and removed a bundle swathed in newspaper, sodden and turned to sticky clods of wet ash. Once unwrapped, the hunting knife refused to glint in the evening light as if it knew there was grave business ahead.

It was time. The innocent would die to punish the guilty. 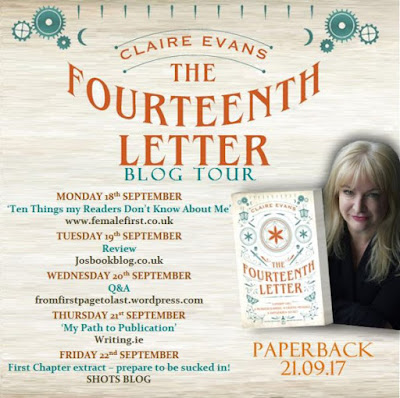 The Fourteenth Letter by Claire Evans published by Little Brown
A mysterious keepsake, a murdered bride, a legacy of secrets... One balmy June evening in 1881, Phoebe Stanbury stands before the guests at her engagement party: this is her moment, when she will join the renowned Raycraft family and ascend to polite society. As she takes her fiancé's hand, a stranger holding a knife steps forward and ends the poor girl's life. Amid the chaos, he turns to her aristocratic groom and mouths: 'I promised I would save you.' The following morning, just a few miles away, timid young legal clerk William Lamb meets a reclusive client. He finds the old man terrified and in desperate need of aid: William must keep safe a small casket of yellowing papers, and deliver an enigmatic message…
Posted by Ayo Onatade at 07:00