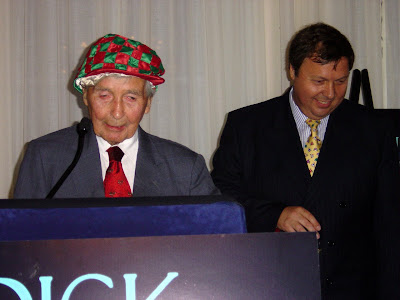 The launch of a new Dick Francis novel has always been a glittering affair usually held at the Savoy Hotel. Sadly, that venue is no longer available but Claridges in Brook Street, London was a rather splendid substitute. The luxurious hotel provided the launch pad for Silks, written in collaboration with his son, Felix and published by Michael Joseph.
Excellent canapés and champagne flowed as many paid homage to the great author on a very rare public appearance. Dick Francis took to the stage and showed everyone that he was still a man to be reckoned with, his wit as sharp as a knife. And didn't bat an eyelid when Felix plonked a jockey's cap on his head. Felix then took over and explained a little about the Francis Franchise.
Afterwards Dick and Felix spent some time signing books for the attendees (which I was told they hadn't done for the trade). Silks is an excellent read and the collaboration continues a tradition started by Dick, and I can see Felix taking up the reins for the next book with the ease of Desert Orchid crossing the finishing line.
************************************************************************************ 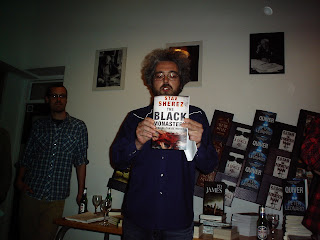 Despite the present doom and gloom in the financial world, it was good to see that Faber & Faber UK publishers were in the party mood. They had invited their authors and a group of crime reviewers to what, I think, was the first Crime Party held in the penthouse of their London building.

There was a good turn out with the usual reprobates turning up: Ayo Onatade, Ali Karim, Mike Ripley, Barry Forshaw, Natasha Cooper, Margaret Murphy, Chris Simmons, Cathi Unsworth, Adrian Muller and Philip Gooden (OK not all of those are reprobates). Each having the chance to meet with Nicola Upson, Stav Sherez, Adam Creed, Jason Goodwin, Andrew Martin, Roger Morris and Tobias Jones.

Each author was called upon to say a few words about their main protagonist by editor, Angus Cargill. After which they were let loose to mingle, drink and feed on the rather fine selection of cheeses. Angus is particularly excited about Faber’s expanding crime list and flicking through their catalogue, it does appear that there are some cracking books coming up.

Thanks to Snapper Karim for the photo. The other photos will be loaded up over at the Shots Website next week.

Andrew Martin has a few words 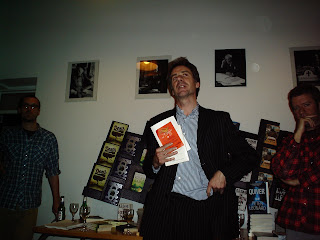