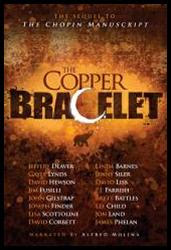 Sixteen thriller writers. Three continents. One incredible story.
Sixteen of the world’s greatest thriller writers - including Jeffery Deaver, Lee Child, Lisa Scottoline and David Hewson – have collaborated on The Copper Bracelet, the standalone sequel to the The Chopin Manuscript, winner of the 2007 ‘Audiobook of the Year’ Award.
Published only as a direct-to-digital audiobook download, The Copper Bracelet is a collaboration devised by crime writer Jeffery Deaver who - in the most daring game of consequences - outlined the plot and wrote the first chapter, before passing the story on to each successive bestselling author. The story was finally returned it to Deaver to complete this thrilling sequel to The Chopin Manuscript.
"I can't think of a more enjoyable writing experience in my 25 years of being a fiction author than writing The Copper Bracelet and its predecessor, The Chopin Manuscript. We writers spend way too much time by ourselves in dark rooms, and it was a delight to emerge from the cave and hang out, so to speak, with my peers," said bestselling crime author Jeffery Deaver.
"This was like playing on an all-star team, and all the hits were home runs ... we were really up for it," added Lee Child.
Exclusively available as an audiobook from audible.co.uk and iTunes – and read by Alfred Molina - The Copper Bracelet will be published on 29th October and the first chapter is available to download free here.
A peaceful picnic in the French countryside explodes in violence. A mysterious assassin hisses a deadly threat. And events are set in motion that could propel India and Pakistan down the road to nuclear confrontation. Former war crimes investigator Harold Middleton and his volunteers return to once again must crack a secretive conspiracy that not only threatens their lives, but the stability of the world. Their race against time will take them from London to the U.S. to Russia and beyond. And at the heart of it all is one question: what is the secret of the Copper Bracelet?
The Copper Bracelet is written by Jeffery Deaver, Gayle Lynds, David Hewson, Jim Fusilli, John Gilstrap, Joseph Finder, Lisa Scottoline, David Corbett, Linda Barnes, Jenny Siler, David Liss, P.J. Parrish, Brett Battles, Lee Child, Jon Land and James Phelan, and narrated by Alfred Molina. The Copper Bracelet is available on 29th October 2009 from http://www.audible.co.uk/, launch price £6.99.
Posted by Mike Stotter at 16:25 No comments: 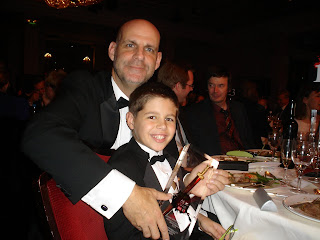 Further to the earlier post on the results on the Specsavers Crime Thriller Awards 2009. Attached are some further pictures from that indomitable photographer Ali Karim. The first photograph is of Harlan Coben and his son Will who is evidently as overjoyed as his father was to win the ITV3 Bestseller Dagger beating off some very stiff competition from the likes of Martina Cole, Alexander McCall Smith, Nicci French and Dick Francis. 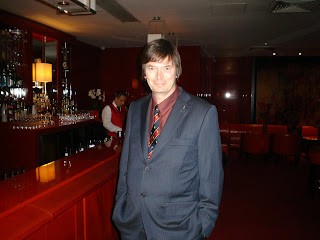 Ian Rankin, who along with Val McDermid, Lynda La Plante and Colin Dexter were inducted into the Hall of Fame in recognition of their outstanding careers and huge contribution to the genre.
Author Simon Kernick congratulating John Hart who won the CWA Ian Fleming Steel Dagger 2009 for the best thriller novel along with Shots Mag editor Mike Stotter.
Shots Editor Mike Stotter along with Ashes to Ashes star Philip Glenister and Ali Karim after the awards had been given out.

Hall of famers Val McDermid and Colin Dexter at the award ceremony. 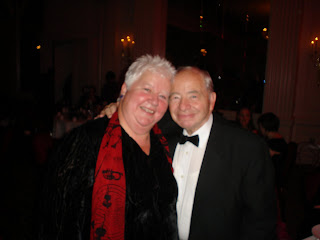 The Suspense Is Over:
The Specsavers Crime Thriller Awards 2009 Unmask the Winners

The evening boasted an array of famous faces from the worlds of screen and books, and was hosted by comedian Alan Davies at London’s Grosvenor House Hotel. The culmination of a six-week season of ITV3 crime and drama programming, the Specsavers Crime Thriller Awards 2009 will be televised on ITV3 on Tuesday, 27th October at 9PM.

A highlight of the evening was the brand new award - the ITV3 Bestseller Dagger, sponsored by Specsavers. Following a 6 week TV and online campaign, it was revealed that ITV3 viewers voted for Harlan Coben as their favourite crime genre author, beating Dick Francis, Alexander McCall Smith, Nicci French and Martina Cole.

The best crime novel of the year went to international best-selling author William Brodrick who won the CWA Gold Dagger 2009, sponsored by BooksDirect, for A Whispered Name (Little, Brown).

In recognition of their outstanding careers, Colin Dexter, Lynda La Plante, Ian Rankin and Val McDermid collected trophies to commemorate their inaguration into the Hall of Fame.

Amanda Ross, Managing Director Cactus TV, said: "It’s amazing to have secured the future of this event through our partnership with Specsavers and the CWA. We’ll be able to build on the event year on year."

Click here to see photos of the evening from The Bookseller.

Watch the Youtube clip from Midas Public relations
Posted by Mike Stotter at 12:02 No comments:

The results of the Anthony Awards are in! Congratulations to all the winners.
Best Novel - The Brass Verdict by Michael Connelly [Little, Brown and Company]
Best F

More awards have been given out. This time it was the turn of the Shamus Awards. My thanks go to the Rapsheet for the information.

The Awards which are sponsored by the Private Eye Writer's of America were given out at the Shamus Awards banquet which was held at Indianapolis' Slippery Noodle Bar. The winners were as follows:-
The E

Some awards have already been given out at Bouchercon 2009 on Thursday night and they are as follows:-

Congratulations to all the winners!
Posted by Ayo Onatade at 18:55 1 comment: 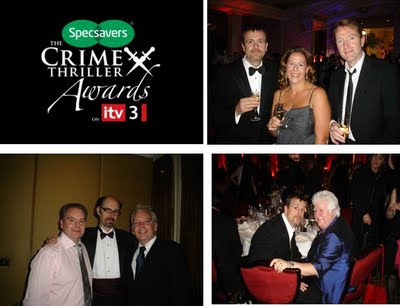 Is it any wonder that Crime Thrillers have such appeal? Why not go out and buy a few of the books on the shortlist and discover the wonders of the genre. It might take your mind off the pervasive gloom that cloaks our economic reality - Ali Karim
Posted by Ali Karim at 19:36 2 comments: