Books to Look Forward to from Head of Zeus

What would you do for the perfect life? Would you LIE? Would you CHEAT? Would you KILL? Cecilia Wilborg has THE PERFECT LIFE. A handsome husband, two beautiful daughters and a luxurious house in the picture-postcard town of Sandefjord.  But Cecilia also has A DARK SECRET. A secret so damaging it can never be brought to light.  Then Tobias enters her life. He is a small, friendless eight-year-old boy who just wants to find a home. But he threatens to bring Cecilia's world crashing down. The Boy at The Door is by Alex Dahl.

The End of Days has been predicted for the last two thousand years, but now it is upon us.  A secret war was raged for millennia, a bitter conflict as old as time itself: the battle between Good and Evil. Brother and sister Emma and Bravo Shaw now stand at the epicentre of the confrontation, for they possess the only copy of The Book of Deathly Things - the fallen Archangel Lucifer's first and last Testament.  While Emma and Bravo struggle to decipher the book's dreadful secrets, Lucifer's advance guard, the Fallen, are awakening. Should they can reclaim the Testament, Humankind will be irrevocably enslaved by the forces of evil. Time is running out, leviathan is coming, the apocalypse is nigh.  Four Dominions is by Eric Van Lustbader.

September 1939. A new day dawns in Sackwater, not that this sleepy backwater is taking much notice...  Inspector Betty Church - one of the few female officers on the force - has arrived from London to fill a vacancy at Sackwater police station. But Betty isn't new here. This is the place she grew up. The place she thought she'd left behind for good.  Time ticks slowly in Sackwater, and crime is of a decidedly lighter shade. Having solved the case of the missing buttons, Betty's called to the train station to investigate a missing bench. But though there's no bench, there is a body. A smartly dressed man, murdered in broad daylight, with two distinctive puncture wounds in his throat. While the locals gossip about the Suffolk Vampire, Betty Church readies herself to hunt a dangerous killer. Betty Church and the Suffolk Vampire is by M R C Kasasian.

In southeast London, a young mother has been accused of an unthinkable crime: poisoning her own child - and then leaving him to die.  The mother, Ellie, is secretive and challenging - she's had a troubled upbringing - but does that mean she's capable of murder?  Balancing the case with raising her disabled five-year-old son, criminal defence lawyer Sarah Kellerman sets out in desperate pursuit of the truth. But when her own child becomes unwell, Sarah realises she's been drawn into a dangerous game.  In The Blood is by Ruth Mancini. 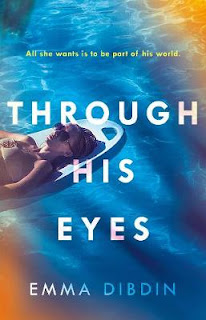 You have to know when to say no. That's one of the first things they tell you. But from the first day I arrived in Los Angeles, I said yes. Jessica Harris is a struggling Hollywood reporter hungry for her big break. When her editor asks her to profile movie star Clark Conrad, Jessica is sure her luck is on the turn. Clark is an A-lister with access to everyone. If Jessica can impress him, she's made it.  When she arrives at Clark's mansion in the Hollywood Hills, he is just as she always imagined. Charming, handsome yet disarmingly vulnerable. But then things take a darker turn. Clark's world is not as straightforward as it seems and Jessica's puff piece soon becomes something much more delicate - and dangerous. As Jessica draws herself deeper into Clark's inner circle, events begin to spiral out of her control.  Transfixing, insightful and unsettling, Through His Eyes drops is by Emma Dibdin and drops you into the mind of a young woman with everything to play for - and everything to lose...

The Psychology of Time Travel is a time travel murder mystery by Kate Mascarenhas.  1967: Four female scientists invent a time travel machine. They are on the cusp of fame: the pioneers who opened the world to new possibilities. But then one of them suffers a breakdown and puts the whole project in peril...  2017: Ruby knows her beloved Granny Bee was a pioneer, but they never talk about the past. Though time travel is now big business, Bee has never been part of it. Then they receive a message from the future - a newspaper clipping reporting the mysterious death of an elderly lady... 2018: When Odette discovered the body she went into shock. Blood everywhere, bullet wounds, that strong reek of sulpher. But when the inquest fails to find any answers, she is frustrated. Who is this dead woman that haunts her dreams? And why is everyone determined to cover up her murder?

Books to Look Forward to from Orion Publishing Group