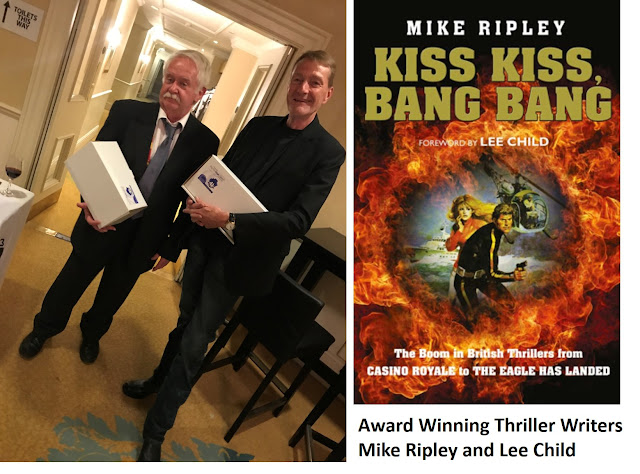 So as August fast approaches, many of us think about our summer vacation, and what to pack for our reading. I was delighted to receive and update from Kiss Kiss Bang Bang’s Mr Ripley.

What we have in store from Ostara Publishing looks intriguing, and recommended by Ostara’s Thriller Consultant. Though I’m still giggling about his SORRY I HAVEN’T A CLUEDO from Crimefest, which is archived HERE

So here are two books worth exploring -

The Man Who Would Be Bond
When hard-as-nails sailor-turned-gun-runner-turned assassin for the sinister Department K John Craig made his fictional debut in 1964 in The Man Who Sold Death, he was immediately touted as a replacement for James Bond, James Munro’s novel appearing less than three months after the death of Ian Fleming.

The Man Who Sold Death was an instant success, being reprinted five times in hardback before becoming a best-selling paperback in 1966. Three more ‘John Craig’ novels followed, and all were hugely successful in America where John Craig and James Munro are perhaps better remembered than in the UK.

By 1967, John Craig had been replaced in his creator’s affections by another ruthless killer who was to become an iconic character of British television and of spy fiction, when Munro, under his real name of James Mitchell (1926-2002), created Callan. All five Callan novels and two collections of short stories are also published as Top Notch Thrillers.

The Man Who Sold Death garnered rave reviews, the New York Times calling it ‘An intrigue that really spins and sparks excitement’ and the Daily Express enthused: ‘A successor to Bond who is as tough and exciting to women as the original.’

The Swinging Sixties Turn Sour
The companion Top Notch reissue for August also introduced a new hero – known only as ‘Raven’– who put his own very cynical slant on the Swinging Sixties London scene, its rich and fashionably dissolute elite and the growth, on an industrial scale, of the trade in heroin.

First published in 1970, The Diamond Hook was the first novel to feature the enigmatic private eye ‘Raven’ by James Quartermain, the pen-name assumed by playwright, artist and illustrator James Broom-Lynne (1916-1995) who as a designer created some famous dust-jackets in the 1960s for, among others, the racing thrillers of Dick Francis and Adam Diment’s legendary debut, The Dolly Dolly Spy.

The Diamond Hook is a tough, brutal, uncompromising story of revenge, opening in London’s fashionable clubland and climaxing in the Dordogne region of France. The central plot-line has the damaged hero Raven forcibly turned into a heroin addict but still intent on solving his ‘case’; a trope famously used five years later in the film French Connection II.