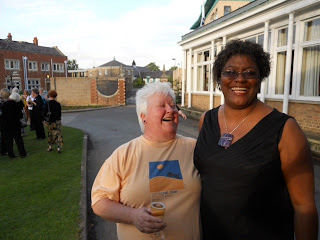 I thought that I was going to have the opportunity to blog about the conference over this weekend but alas not. It is a testament to how much fun I was having over the weekend that I did not manage to do any blogging.

If you have never managed to attend St Hilda’s Crime and Mystery Conference then you have missed a treat. Unlike Crimefest or Harrogate St Hilda’s is a lot more academic. The weekend is always based around a theme that is chosen and agreed by the organisers at the end of each previous conference. This year the theme of the conference was Anatomy of Justice and the papers that were presented all used this as the main background to their talk.

As an attendee you know that St Hilda’s has started when everyone gathers on the lawn overlooking the River Cherwell for a champagne reception early on Friday evening. It is not only a chance for everyone to meet up before the conference starts in earnest on the Saturday morning but it is also a chance to renew friendships, see which of the stalwarts are back again and generally catch up amongst the spires of Merton and Magdalen College. The drinks reception is always followed by the first of the two conference dinners and by tradition those that are giving a paper on the Saturday get to sit at the top table. Thus I found myself on the top table alongside Kate Charles, Val McDermid, Cath Staincliffe, Triona Adams, Natasha (NJ) Cooper who was Chair of the conference this year, Frances Fyfield and Ann Granger. Both Val McDermid and Triona Adams are former students of St Hilda’s. In fact Val is now a Fellow of the college as well. After the dinner there is always a conference dinner speaker. This year it was Triona Adams who spoke about remembering the late Sarah Caudwell with whom she was a great friend. Sarah Caudwell had in fact been a speaker at the very first conference back in 1994. After dinner everybody wandered down to the Senior Common Room (SCR) and spent the rest of the evening just talking and catching up with one another. This was enlivened by the added fact that Eileen Roberts the co-organiser kindly added to the jollity of the occasion by supplying wine.

The conference well and truly started on Saturday morning after breakfast. One of the things that I like about St Hilda’s is the fact that you all stay together on the College grounds. It is very reminiscent of being back in boarding school but it is such good fun that one does not worry too much at the basic facilities. Some people may but I certainly do not. It always adds to the fun. The first papers that were given were by Val McDermid and myself. My paper was entitled Life along the Judicial Corridor whilst Val’s paper was entitled Making the Law work for you: an author’s guide. I don’t normally talk about my day job and this was one of the few times that I spoke about working with senior members of the judiciary for the last 12 years. Val spoke eloquently about how making the law work for authors. What generally tends to happen is that after two papers are given then the speakers answer questions from the audience.

After a brief break for tea and coffee the second round of papers were given. This time Frances Fyfield spoke about Peculiar Trials and after listening to a radio programme that she had done on BBC World Service about animals going on trial for offences that they had committed she also spoke about why this happened. Cath Staincliffe who gave a heartfelt, thought provoking and moving paper about assisted dying and the way in which it is dealt with by the law, followed Frances Fyfield. A lively discussion took place afterwards and this included P D James who was attending the conference for part of the day who commented on the difficulties surrounding assisted dying.

After lunch the first two papers that were given were by Jane Finnis who spoke about Laws and Sausages: Justice in the Roman Empire and Ann Granger who spoke about Newgate Prison and whether or not it was a symbol of its times? Following a brief break again for tea Andrew Taylor and Martin Edwards were the next two to give the final papers of the day. Andrew spoke about Willkie Collins and the women in his life. Andrew Taylor’s talk was most interesting as he highlighted the rather strange relationship that Willkie Collins with the two main women in his life and the way in which he managed to balance the two together. When he died he even split his possessions equally between the two families. Martin’s talk was about British lawyers who are also authors. Martin himself falls into this group along with Rankin Davies, Dexter Dias and the late Cyril Hare. He also discussed Tragedy at Law, which is the book that Cyril Hare is best known for. It was interesting listening to both Andrew Taylor and Martin Edwards as they answered questions afterwards. They make a very good double team. 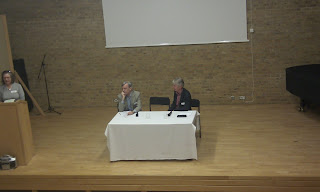 You always pick up snippets of interesting information whilst you are at St Hilda’s and this year was no exception. Did you know that the late Michael Gilbert was once Raymond Chandler’s legal advisor? I didn’t!

After the final papers on Saturday there is always a signing session for all the authors that are present. This takes place in the SCR and it is always and opportunity for attendees to get their books signed by authors that are present whether or not that author is actually giving a paper. It is also an opportunity for photographs to be taken and conversations to take place between attendees and the authors in a much more relaxed atmosphere.

The after dinner speech on the Saturday evening is always given by the conference Chair and this year NJ Cooper gave a speech on recalling Trish Maguire. What has now become a tradition; Mystery Women hosted a drinks reception in the SCR. Those of you that know me are aware of the fact that I have no qualms in staying up late at these things. However, I was remarkably restrained and found myself back in my room just after 12:00am on Friday and Saturday.

Sunday is always slightly different and after breakfast there is the opportunity to do whatever you like. Whether it be go to Church, punt or just relax. This year I made the most of the opportunity and wandered up the Cowley Road with my friend and fantasy author Juliet McKenna to have a relaxing morning catching up with her and would you believe to do so work as well! 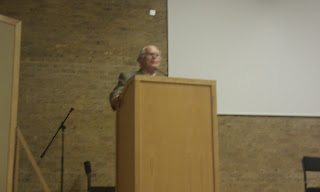 The talks began mid-morning with a fascinating Conference Lecture by the Conference Guest of Honour Professor Bernard Knight CBE. His lecture was on The Coroner: Medieval Relic or useful institution? In essence it was a history of the work of the Coroner. He explained that Coroners only came into being around 1194 partly due to Richard the Lionheart. Their job was varied and multifaceted but always had a financial backdrop. It was not until 1282 that Coroners were established in Wales. Bernard Knight’s talk covered a wide broad spectrum of the work of the Coroner from its original beginnings to the present day. He touched on some of the more unusual aspects of the early work of a Coroner, which included the fact that they used to have to attend all hangings. Only a Coroner could declare someone an outlaw if they did not turn up to court after three chances. They were appointed by the King to do anything. He also pointed out that police programmes often got the role of the Coroner wrong. As he explained, they could call for a Doctor but a post-mortem could not be done without the permission of a Coroner. Rather sadly this is not the impression that is given on police programmes.

Professor Knight is a former Home Office Pathologist who has dealt with some rather high-profile cases. He is also the author of the Crowner John Mysteries a series of 12th Century historical mysteries featuring Sir John de Wolfe Coroner of the Verge. So far there are 14 books in the series. He is also the author of the Dr Richard Pryor series, which is set in 1955 Wales. 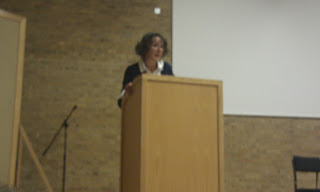 After lunch the final session of the day started. Penny Evans spoke on the topic of provocation and how it is dealt with by the law under the title Wicked Mr Boyce and the slow burn: A talk about why it is better to kill your husband when he’s awake… As she pointed out, women are most certainly given a rough deal when provocation is raised as a defence in court compared to men. The final paper of the day was given by Keith Miles (aka Edward Marston) who spoke wittily and extremely funnily about the character Rumpole of the Bailey. It was a fitting end to the conference.

One cannot thank Eileen Roberts and Kate Charles enough for organising such a wonderful conference. Furthermore having a wonderful Chair adds to the lustre and NJ Cooper was absolutely wonderful. She is so good at putting people at ease and she does it with such charm and style.

So what about next year?

The dates have already been agreed and the theme chosen. Next year St Hilda’s Crime and Mystery Conference will take place between 17th and 19th August 2012 and the theme is Stop You’re Killing Me: Humour in Crime Fiction. So note the date and I look forward to seeing many of you there!