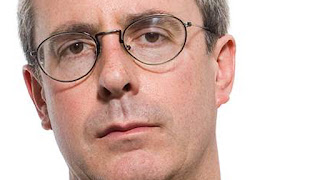 Today's guest blog is from Scottish crime writer Paul Johnston. He studied Greek at Fettes College and went on to study ancient and modern Greek at the University of Oxford. He currently spends most of his time in Greece where he moved to in 1987. His debut novel Body Politic won the Crime Writer's association John Creasey Memorial Dagger Award (for best first novel) in 1997. His latest novel in the Alex Mavros series The Silver Stain is published today.

Unless you’re Ian Rankin – which I, though a fellow Scot and Edinburgh denizen, am clearly not –the idea of writing twenty or so novels in the same series is daunting. In my experience, series have their own inbuilt life spans. At least, that’s what I thought until earlier this year. For my sins, I am the author of three series.When each one ended, I had no clear conception of ever going back. Until earlier in 2011……
Let’s do this in reverse chronological order. My most recent series featured crime writer turned investigator Matt Wells (wish fulfillment, moi?) and consisted of The Death List (2007), The Soul Collector (2008), Maps of Hell (2010) and The Nameless Dead (2011), all published by MIRA Books. They did pretty well in the UK, US and globally, but there was a basic problem for me – although the novels can be read as straight crime thrillers, they all have substantial undertones of genre-bending and satire. They’re partly in the first person and, frankly, who would trust a crime writer? Wells may not seem to be a classic unreliable narrator, but… I also had a go at several scared cows and genre conventions – among them, publishers and agents in the first book; Golden Age puzzle clues and – erk – crime writers in the second; Jason Bourne, Nazis and Satanism in the third; and that old chestnut of the hitperson on his/ her last job (spoiler non-alert) in the fourth. Anyone who’s read The Nameless Dead can see that the series reaches a natural end - or at least hiatus. Never say never…..

The situation with my second series was different. Alex Mavros, a half Greek half Scots missing person specialist based in Athens, first appeared in A Deeper Shade of Blue (2002). In the last decade, there has been a huge increase in crime fiction set abroad, written both by locals and by foreign interlopers like me. A decade ago, there was much less. One of my favourite writers was Michael Dibdin, whose Italy-set series featuring Aurelio Zen, eventually ran to eleven novels and was cut short by the author’s untimely death. I particularly admired Dibdin’s decision to set each novel in a different part of the country, increasing reader stimulation substantially, though making the author’s job harder as regards research. I ambitiously (foolishly?) resolved to follow this model.

A Deeper Shade of Blue (now available as Crying Blue Murder, a title change requested by my publishers, which at least removed the danger of being linked with the execrable pop group Steps) found Mavros on an Aegean island, where the white houses conceal some very noir goings-on. I actually invented the island of Trigono(‘Triangle’), as I didn’t want a knife in the back from an enraged inhabitant of the real island I lived on for several years – I wasn’t hugely complimentary about certain aspects of island society. If you write novels set in a country with a history and culture as rich as Greece’s, you have to be prepared to take account of those, so Mavros follows clues to black market ancient statues as well as coming to understand the effects of more modern events like the Second World War and drug smuggling. 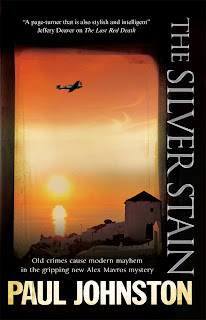 Mavros 2, The Last Red Death (2003) remains a very special book for me. For a start, it won the now defunct Sherlock Award for best detective novel of 2004, a real thrill for a lifelong Conan Doyle fan – one who as a child owned a stick insect named Sherlock (I say that up front before the likes of Mark Billingham mention it). More seriously, I wrote the book under sentence of death. Between finishing it and doing the final edits, I was diagnosed with a very aggressive and advanced cancer, which needed heavy-duty surgery and a bucket-load of chemotherapy to sort it out. I honestly believe that my subconscious was whispering, ‘Write the best book you can as this might be your last chance’. Weird, huh? Anyway, the book got some really flattering reviews, not least from writers I greatly admire. Set mainly in the Peloponnese and using elements of the Hercules myth, it attempts to explain the phenomenon of terrorism in Greece, linking it to the Axis occupation during the Second World War and the subsequent soul-destroying civil war. The novel was later published in Greece, which caused me a lot of angst beforehand, but it received a hearty welcome – as well as a degree of surprise that a foreign writer was so interested in the country. Well, Britain doesn’t have a glorious record in Greece and I was attempting to redress that in a small way.

The third Mavros book, The Golden Silence (2004), was my take on the gangster novel and was set mainly in Athens. I had Greek friends who said to me, ‘Greek mafia, what Greek mafia?’ Suffice to say, there is one, or at least several warring families and groups, these days in conflict with Albanian, Serbian and Russian gangs. Mavros – who is haunted throughout the series by the disappearance of his brother, Andonis, during the Colonels’ dictatorship of 1967-74 – comes up against a pair of enforcers whose roots are in that repressive period. As in all the books, he thinks he’s finally on Andonis’s trail, but the leads take him nowhere. This reflects the importance of family in Greek life, though Mavros himself is the classic liminal PI, standing at the edge of a society which he understands but does not feel wholly part of. His dual nationality is a crucial part of his character.

My excellent editor Philippa Pride left Hodder and Stoughton before The Golden Silence was published and it soon became clear that the company wasn’t interested in more Mavros books. I turned to Matt Wells and forgot about my fictional renderings of Greece, although I married a Greek in 2005 and have been spending even more time in the country. MIRA Books, who published the Matt Wells novels, decided to reprint the Mavros novels in the UK in 2009. That was good of them, not just because it kept in print the old warhorse with the strange eye (one brown, one flecked with blue). I had another bout of cancer in 2008 and lost a lot of writing time. I’ve since discovered that I have a rare gene malformation, which makes me susceptible to several otherwise unrelated cancers – so if I don’t make it to the end of this blog, you’ll know what’s happened…nah, I’m OK. I just get tested more than the average mortal, which will probably mean I eventually have to change my name to Methuselah. Hang on, that might be a good nom de plume…

Anyway, there was no talk of more Mavros, so I got on with Matt Wells’s increasingly surreal adventures - until the perspicacious Kate Lyall Grant at Crème de la Crime spotted the potential and commissioned two more Mavros novels. I’d written quite an extensive synopsis (not something I normally do) for Mavros 4, but Hodder turned it down. Digging it out and reading it seven years on was a distinctly strange experience. So much had happened in my life (including the arrival of two children) that Mavros was a blast from a different past. Technically, I had to recalibrate as the Wells novels were first person/ third person hybrids, while I had always written Mavros in the third person as if I were perched on his shoulder, though there were scenes without him too. Messing with point of view is one of the great joys of writing.

So, I revamped the synopsis – keeping the basic ideas of Crete as a location and a Hollywood movie about the German invasion in 1941 being shot there - and started writing. I was apprehensive before I wrote the first sentence, but Mavros and his sidekicks – the Fat Man, now without his café, and Niki, the PI’s volatile lover – came back to life with amazing rapidity. The analogy of vampires waiting in their coffins for twilight struck me as apposite more than once. Authors, beware! Your characters suck your blood, at the same time as leading you a merry and, one hopes, profitable dance.

So was born The Silver Stain, in which Mavros comes up against slimy Hollywood types, a starlet nicknamed ‘Twin Peaks’, a mountain village devoted to marijuana production (there is one in reality), and a link, not to Andonis, but to another close family member. I had fun with the locations, as Crete, the ‘Great Island’, is very definitely Greek but is equally very different from the rest of the country. The book is a shorter, less diverse investigation of Greek history and customs, but I think it’s stronger for that. And there are Nazi paratroopers fighting Cretan villagers and Maoris – drama in spades. As in all the Mavros novels, my main interest is the effect of the past on the present. In Crete, the weight of history is very heavy, despite the surface-level pandering to tourism.

And now, to end where I began. My first series (Body Politic, The Bone Yard, Water of Death, The Blood Tree and The House of Dust), set in an independent Edinburgh in the 2020s and featuring Quint (Quintilian) Dalrymple, has recently been republished in digital format by Severn Select. There will also be a sixth Quint novel at some stage in the near future. Truly, never kill off your protagonists and always be prepared for their coffin lids to creak open when the sun disappears over the western horizon…

Paul Johnston’s The Silver Stain is available as a hardback from Crème de la Crime (December 2011 in the UK and April 2012 in the US). There will be a paperback edition later in 2012. For more information, consult his website www.paul-johnston.co.uk
Posted by Ayo Onatade at 10:46

Excellent post. New to the Mavros series, but looking forward to catching up with them all.