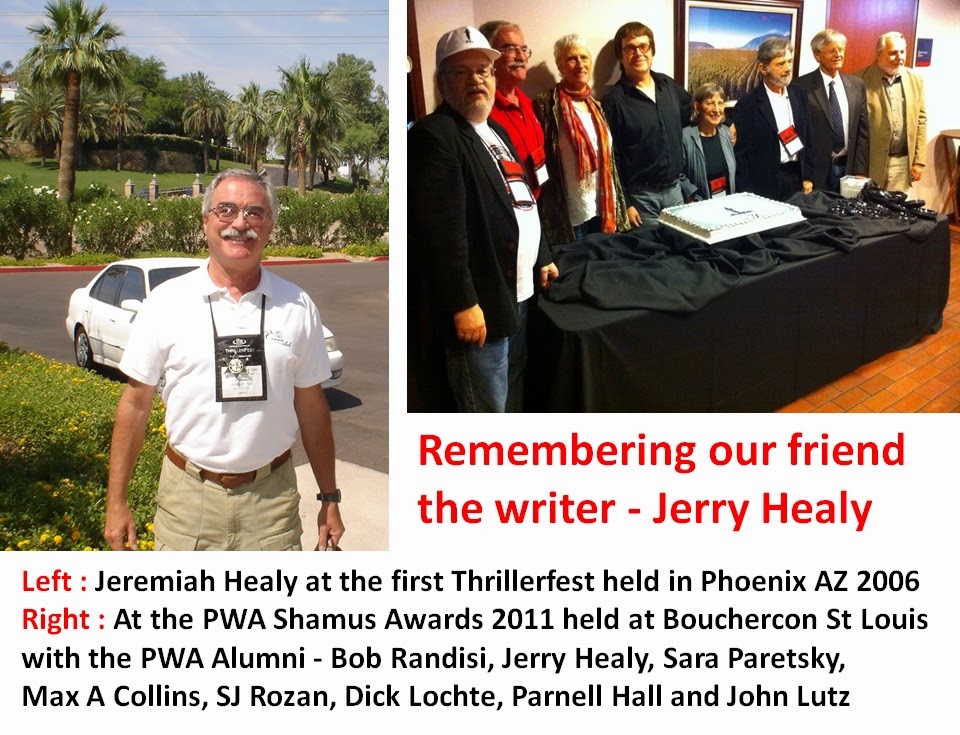 The crime / mystery / thriller community is in shock at the tragic news of the passing of crime writer Jeremiah Healy.

Though perhaps not as well known in Europe as he was in his native America, he was a firm fixture of the community, and we’d all meet up with him at conventions and conferences such as Bouchercon, Thrillerfest and the many other events that celebrate the joy that is writing and reading - an effort to make sense of the reality that we find ourselves in.

“I am very saddened to learn of the suicide of my colleague Jerry Healy. Jerry was what we in my family would call a real character. He had his foibles and eccentricities, as do we all--writers more than most--but he was a good man, a caring man. It's people like Jerry who make being part of the mystery writing community a special thing. It's safe to say, there won't be another like him.”

I’ve had my head down over the last couple of days, trying to finish work on my latest column for Kirkus Reviews. Which may explain why I missed the tragic news that Jeremiah Healy--author of the Boston-based John Francis Cuddy private-eye series--committed suicide yesterday in Pompano Beach, Florida. He was only 66 years old. A post in Bill Crider’s blog says that “depression exacerbated by alcohol” contributed to Healy’s action.

Born in New Jersey in 1948, Healy was a graduate of Rutgers College and Harvard Law School, and had been a professor at the New England School of Law for 18 years. He had served as the chair for the Shamus Awards, president of the Private Eye Writers of America, and president of the International Association of Crime Writers. During his writing career, he turned out at least 18 novels and dozens of short stories. His second Cuddy outing, The Staked Goat (1986), won the Shamus. Under the pseudonym Terry Devane, he also penned novels about Boston lawyer Mairead O’Clare.

I had the chance to interview Healy for January Magazine back in 2000, but saw him at more than one Bouchercon over the years. The last time, I believe, was during the 2011 convention in St. Louis. He always struck me as a smart guy, and very much a fighter. He’d already survived a bout with prostate cancer.

His wife, author Sandra Balzo, sent out the following message:

My heart breaks to send you all this news, especially by email. As you may know, Jerry has battled chronic severe depression for years, mostly controlled by medication, but exacerbated by alcohol. Last night he took his own life. Jerry was the smartest, kindest man I’ve ever met, and I thought we’d continue to grow old together. His demons had other plans. Please keep Jerry in your heart, as you all were in his.

Jeff has updated his article and it can be read here 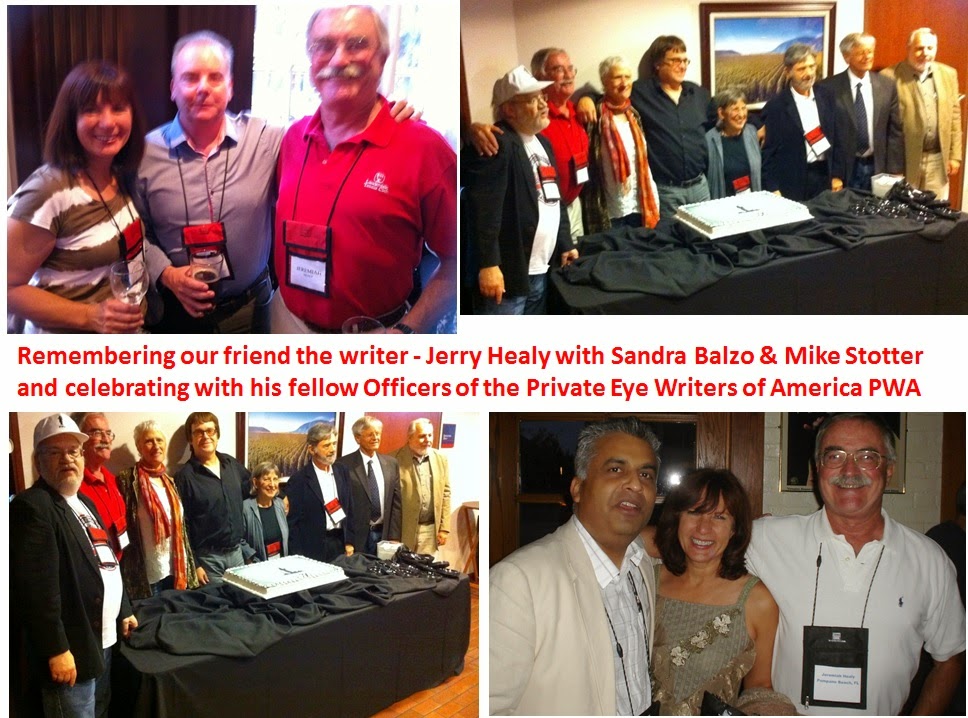 "To ignore Healy's contributions to contemporary detective fiction seems ludicrous. Sure, he may not enjoy the fame of Robert B. Parker or write with the same captivating grittiness as yet another Bostonian, Dennis Lehane, but, to quote the Chicago Sun-Times, Healy has created "one of today's best American mystery series." Jeff Pierce

I first met Jerry Healy at my first Bouchercon held in 2003 in Las Vegas Nevada, and wrote at the time –

"After the registration process I grabbed my goody bag and headed off to the writing seminar. The morning session was led by the Thriller Supremo Gayle Lynds. She gave an informal presentation focusing on the elements that make a good story. There was particular focus towards thrillers, which was natural considering that she co-wrote ‘The Altman Code’, The Paris Option’ and ‘The Hades Factor’ with Robert Ludlum as well as her own work ‘Masquerade’, ‘Mosiac’ and ‘Mesmorized’. Her new book ‘The Coil’ is due for release in April 2004 while ‘Masquerade’ is being relaunced in February. The seminar concluded with a Q & A session that allowed the assembled to ask Gayle questions about their own work, and she put me right on several points when it came to villains.

I thanked Gayle and had a quick lunch in one of the Riviera’s restaurants as en route I had the pleasure of meeting with Jeff and Beth Tindall of CincinnatiMedia.com, an author website development firm who have Karin Slaughter and Laura Lippman to name just two of their Clients. Then I had the delight to meet many of the Rec.arts.Mystery newsgroup that I belong to including Sarah Weinman, Mary, Annie, Judi, Arlene, Mark and many, many others appeared including Beth and Jeff Tindall.

After lunch the second part of the seminar was presented by Jeremiah Healy, who is one of Bouchercon’s guests of honour in Toronto 2004. Jerry Healy has written 17 novels (of which 14 have had Shamus nominations) and over 60 short stories. He writes the renowned Francis Cuddy PI series as well a series of legal thrillers under his pseudonym ‘Terry Devane’. His was formerly a professor of law and is currently the president of the international association of crime writers, so I was somewhat nervous in taking his tutorial class, but I needn’t have been, as it was extremely useful with handouts and real practical advice for writers both published and unpublished. I was heartened to see many published writers attending both Jerry and Gayle’s seminars. At the beginning I thought Professor Healy (who has a military background) was going to shout ‘Drop and give me two thousand words!’ but he didn’t, instead he shared his insights generously and his enthusiasm for writing echoed around the room."

Read the full Report from the Shot archive here

Mike Stotter, Ayo Onatade and I often would bump into Jerry on our US trips to Bouchercon, PWA Shamus Awards and Thrillerfest, where he would greet us warmly, and make us always welcome.

I will leave the last words to S J Rozan who sums up the loss of Jerry Healy in concise and moving terms
We have added a few photos of Jerry who for me remains the man in the red shirt, a great writer, a larger than life personality, who just by his presence made you feel welcome in the community that is crime, mystery and thrillers.

Our thoughts go to Sandra Balzo and his family and close friends. 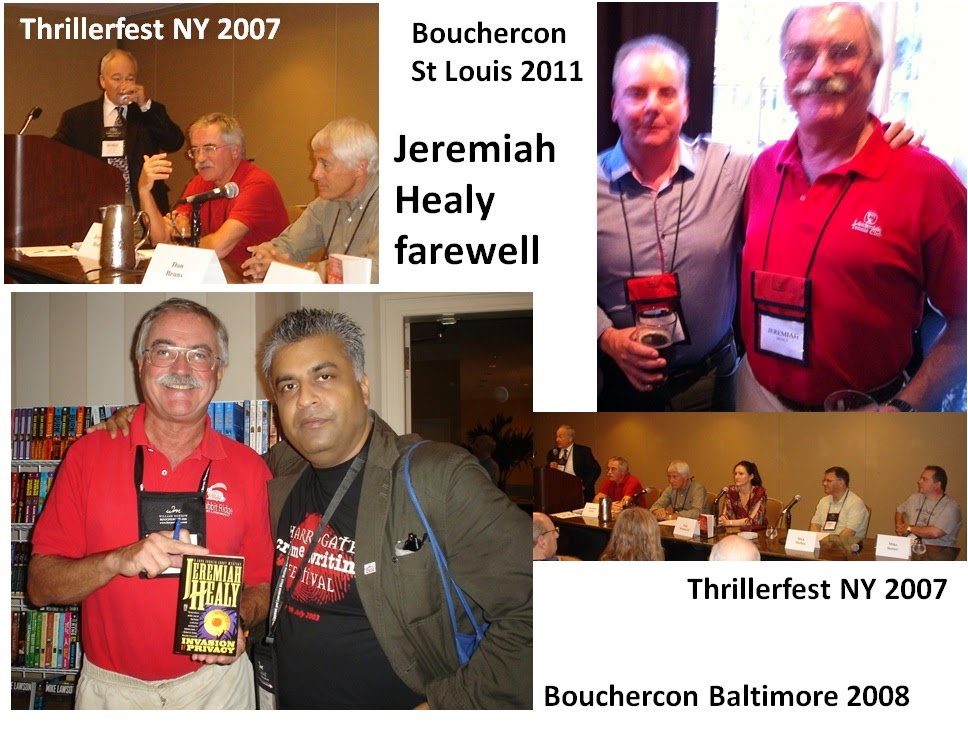 More information about the work of Jerry Healy can be found here
Posted by Ali Karim at 10:57

I'm so sorry to read this news, Ali. I knew him much less well than you, but I enjoyed meeting him and reading not just some of his novels but also his short stories.