I was chairing the afternoon panel at CSI Portsmouth in Portsmouth Bookfest. Absorbed in JS Law and Diana Bretherick’s discussion, I was unusually reticent about myself. An audience member demanded in the Q & A, “What are your books about?”

(I’d only just gathered the idea of techno-thrillers: the gadgetry in Bond; widgets in Bourne. In Van Helsing, I loved the bit where Alun Armstrong as a monk does a Q, equipping Hugh Jackman with all the latest gear. I looked again at my own books. Is the technology central to the plot? You bet it is.)


“But...” the audience member said. “But... the Victorians didn’t have technology.”
That is so many types of wrong that I didn’t even answer.

Assassins & Techno-killers
My first novel Lawless and the Devil of Euston Square starts with a hydraulic crane bursting at Euston Square, as the Metropolitan Line is begun there. The first ever underground railway in the world, plus a (forgotten) London power network that was more effective than electricity up till 1939. What could be more technological?
My hero is a watchmaker. His skills prove crucial in getting him the detective job and at the novel’s climax. The building of the underground entwines with Bazalgette’s sewerage construction, and those two mega-structures are cause and symptom of the societal ills gnawing at the hearts of our characters: Lawless, the policeman with integrity; Skelton, the villain with a heart and brain; Worm, the urchin with two faces; Wardle, the trusty old detective.
Twisted Souls, Twisted Genres
Lawless and the Flowers of Sin was the bastard child of My Secret Life, by ‘Walter’ (greatest pornographic memoir of all time) and The Strange Case of Jekyll and Hyde.


The pornographic craze, alongside the rise of newspapers, magazines, and books, from shilling shockers through Dickens’ and Wilkie Collins’ bestsellers to high literature, was facilitated by technology: cheaper paper, cheaper printing, cheap books; and wider literacy.

Just as Mary Shelley in Frankenstein uses electricity to explore great questions of the soul, so Stevension draws on the latest medicine, psychology and Darwinian theory to create his soul-twisting anti-hero. Jekyll and Hyde is a technological thriller.

Victorian Genre-Bending
For Lawless & the House of Electricity, I struggled with my editor over the genre. I foregrounded the romantic element as well at the technological, relationships as well as crime. She wanted a crime novel, like the first two. And it is.
But, like the first two (and the sensation novels they stem from), House of Electricity twists and subverts: crime needs a social milieu; there are supernatural hints, Brontëesque class clashes, and of course technology.
Devices
In the book you will find electrical buzzers, hydraulic lifts, a pneumatic railway (just like the Victorian system the Post Office has opened to the public). 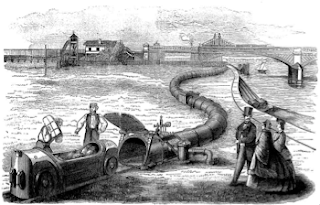 You will find Duchenne’s magneto-electric apparatus:
Posted by Ayo Onatade at 03:30