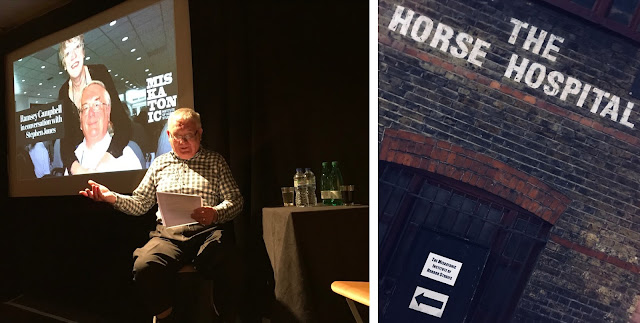 Last week I found myself in the Bloomsbury district of London, in a dark and creepy location that resembled a passageway that Eric Zahn may have traversed. It was the surreal London Horse Hospital that would host a conversation between two key figures in the British Horror World, namely the award-winning novelist, writer and film critic Ramsey Campbell in conversation with one of Britain’s greatest living literary editors Stephen Jones. 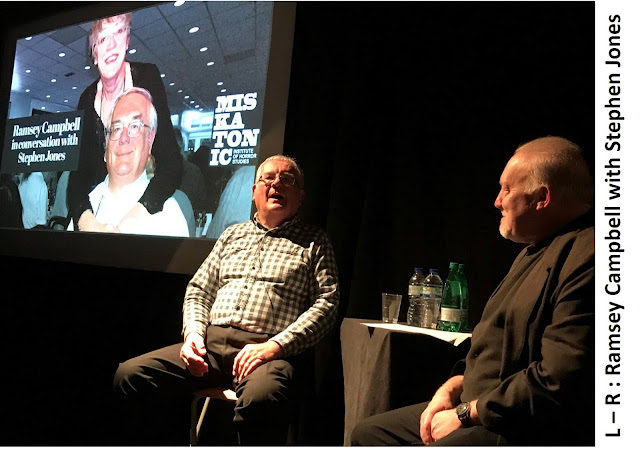 I heard about the event, sponsored and organised by the London Campus of New England’s Misaktonic University; who have kindly uploaded some photos of the event HERE
It was good also to see writers Kim Newman, Barry Forshaw, Sean Hogan and many others. 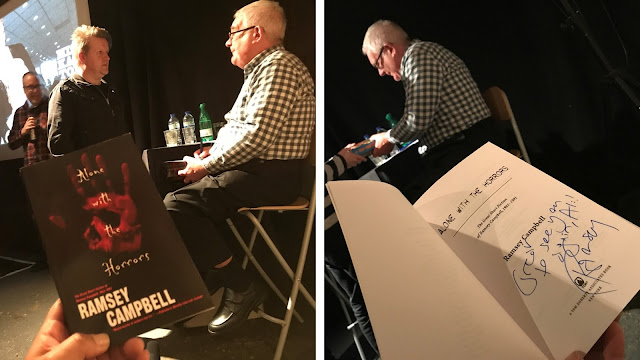 Listening to Ramsey Campbell & Stephen Jones talk about The Weird provoked much thought as it reminded me of the past, and of Liverpool.
As an undergraduate Industrial Chemist in the 1980s, and an avid reader, together with my dear friend John Parker we plucked up the courage to interview the award-winning novelist Ramsey Campbell, as we shared Ramsey's interest in Horror Fiction especially my fascination with HP Lovecraft.
This was the very first author interview I ever conducted [with help from Shots Magazine reviewer and writer John Parker]. The interview was published in 1985 in #22 of Comics Interview Magazine.
During our exchange, I put Ramsey on the spot, asking him for a reading list of great horror fiction which he kindly scribbled down for me, and is presented here. 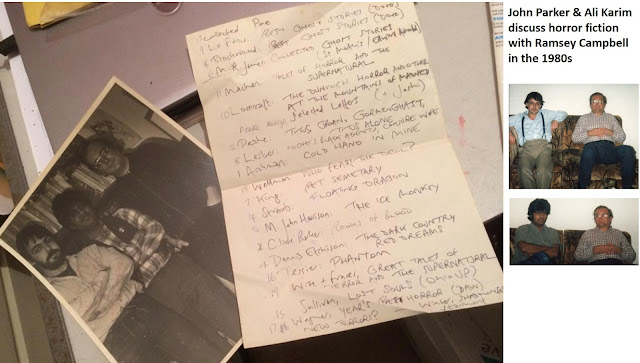 Hat tip to Francis Parker for the photo of the three of us, and my Mom, who cooked an Indian Banquet for us, which we devoured after the interview.
One enduring memory is that when we drove Ramsey home, and saw all the books that filled his house, I realised I was not as odd as some of my friends thought I was, fascinated by the sheer exhilaration of reading, surrounded by the comfort of my books.
As Baltimore's Dr Hannibal Lecter wrote (as he stared at the glow of Orion in the night sky), in the letter to Clarice Starling, that closed The Silence of the Lambs.
“Orion is above the horizon now, and near it Jupiter, brighter than it will ever be ... But I expect you can see it too. Some of our stars are the same.”
For those not familiar with the work of Ramsey Campbell, here’s some background from the Miskatonic Institute for Horror Studies –

The Oxford Companion to English Literature describes RAMSEY CAMPBELL as “Britain’s most respected living horror writer”. An author, editor and critic, he has been given more awards than any other writer in the field, including the Grand Master Award of the World Horror Convention, the Lifetime Achievement Award of the Horror Writers Association and the Living Legend Award of the International Horror Guild, while in 2015 he was presented with an Honorary Fellowship by John Moore’s University, Liverpool, for “outstanding services to literature”. 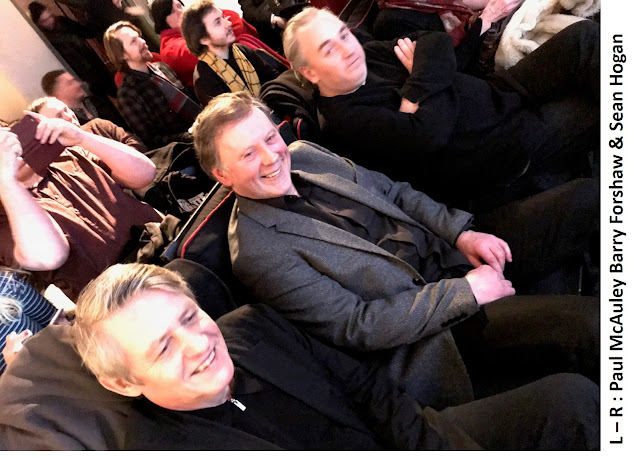 Initially influenced by the works of H.P. Lovecraft, he published his first short story in 1962 and his first collection two years later, both with August Derleth’s famed Arkham House imprint. Since then he has published literally hundreds of short stories and novellas, and more than thirty-five novels, from The Doll Who Ate His Mother, The Face That Must Die and The Hungry Moon, to more recent titles such as Thirteen Days by Sunset Beach, The Searching Dead and Born to the Dark. Campbell has also novelised such movies as Bride of Frankenstein, Dracula’s Daughter, The Wolf Man and Solomon Kane, and PS Publishing recently issued Ramsey Campbell’s Limericks of the Alarming and Phantasmal, which was illustrated by Pete Von Sholly and covered the entire history of horror fiction.

For this exclusive event, Ramsey Campbell will discuss his life, his career and his ideology with his friend and colleague, award-winning editor and writer STEPHEN JONES, as well as giving advice to would-be writers on the current state of horror publishing. The evening will end with a Q&A session with the audience. This is an opportunity no horror fan can afford to miss—an informal discussion with one of the giants of the genre, with more than half-a-century of writing experience to draw upon, about the state of modern fiction and film. Don’t miss it! 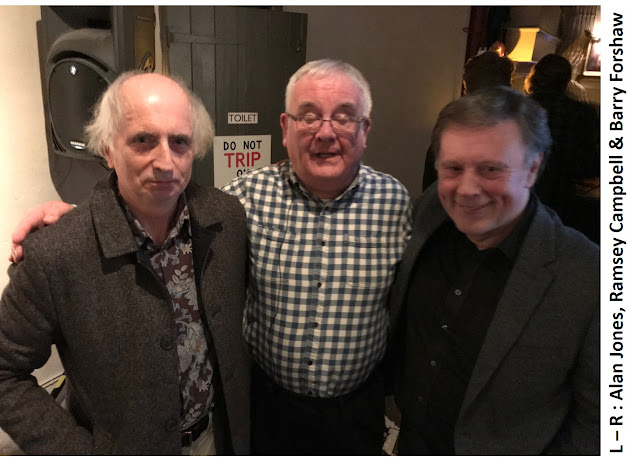 About the Miskatonic Institute of Horror Studies:
Named for the fictional university in H.P. Lovecraft’s literary mythos, the Miskatonic Institute of Horror Studies is an international organization that offers university-level history, theory and production-based masterclasses for people of all ages, founded by film writer and programmer Kier-La Janisse in March 2010, with regular branches in London and New York as well as presenting special events worldwide. Miskatonic London is co-directed by Kier-La Janisse and Josh Saco. 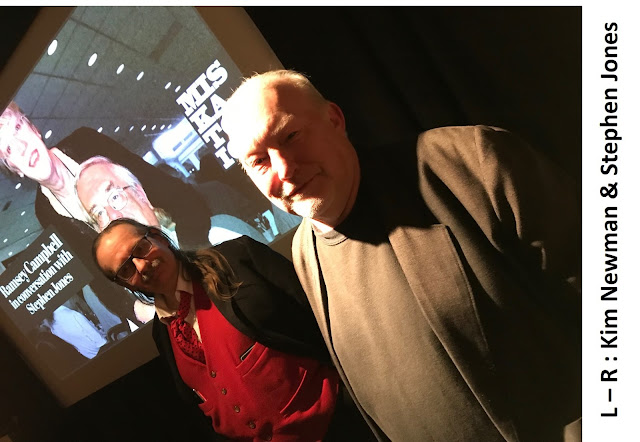 The event was most rewarding for the Horror Reader, especially as Ramsey Campbell had corresponded with August Derleth, knew many of the key players such as Kirby McCauley, Robert Bloch, Charles Grant, Stephen King, Dennis Etchison, ST Joshi and with Stephen Jones on-hand, there was much mention of Cthulhu, Howard Phillips Lovecraft and The Weird.

We have recorded a short clip [under 2 minutes] from the event, that proves Horror Writers do not take themselves too seriously when it comes to the un-nameable and the un-pronounceable. 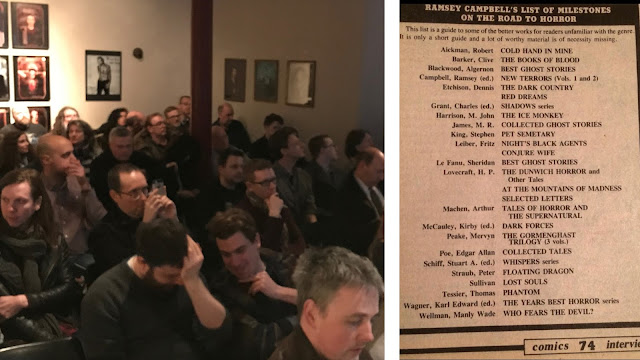 And for those who are interested in the work of HP Lovecraft then this link to the film FEAR OF THE UNKNOWN is worth watching; and incidentally features Ramsey Campbell among many other Horror Luminaries.