My Atomic Love by Jennie Fields 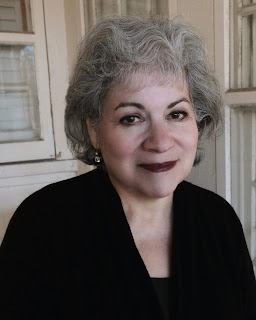 Writing a novel is like mixing a cocktail. The elements must balance, the flavors need to be complex and interesting, yet marry well. And given a good stir, the final product must have a kick. The first element of the cocktail which makes up my new novel Atomic Love was inspired by the fact that my mother was a scientist. Or to be clear, she began as a scientist, a biochemist trained at the University of Chicago in the 1940’s and someone whose cancer research was so significant, her cancer paper was referenced well into the 1960’s. I didn’t discover the impact of her work until recently. She sometimes mentioned to us that she’d worked on an important cancer paper, but frankly, I thought her tale was apocryphal.

You see, by the time I came along, my mother was no longer a pioneering researcher; she was a housewife. Like many American career women in the late 1940’s, when she married, she was expected to forfeit her job to a returning GI, give birth to 2.5 babies and in between host themed dinner parties which ended with towering gelatin desserts. She took her task as seriously as she had science. Even after three babies, her dinner parties were legendary, and she showed up at every Parent/Teacher meeting on time with pearls on. But her love for science and the powerful position she’d once held haunted her. She told me constantly, whatever you do, don’t give up your career. Don’t be like me.

Another family story also found its way into the mix. My mother walked every day to the University of Chicago with her cousin Jean, who worked at the Metallurgical Laboratory. Jean would never tell my mother what she did there. She was so secretive, it put something of a rift between them. It wasn’t until years later that my mother discovered the Metallurgical Laboratory was home to the Manhattan Project. I believe Jean was a clerical worker for the Project, but even late in life, she’d been so sternly warned to keep her job a secret, she never whispered a single specific. That enforced silence made me want to know more.

Research told me that there was, in fact, a female physicist, Leona Woods who was the 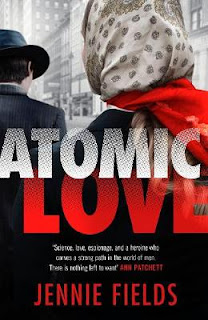 youngest member of the University of Chicago team and the only woman. Woods was a mentee of Nobelist Enrico Fermi and an important contributor to the first nuclear reaction. I took the liberty of putting my main character, Rosalind Porter in Woods’ position. Young, female. But unlike Woods, Rosalind abruptly loses her career. Deeply depressed by the destruction and loss of life caused by the bomb, then abruptly left by her colleague and lover, Thomas Weaver, Rosalind discovers someone’s written a report that says she’s unstable. With men coming home from the war, it didn’t take much to push a woman out of a job they didn’t believe should have been hers in the first place. She feels certain it’s Weaver who’s betrayed her.

The book begins four years later when a contrite Weaver contacts Rosalind saying he must explain what happened between them. Shortly afterwards, she’s approached by FBI agent Charlie Szydlo, a wounded vet suffering with PTSD from his years as a Japanese prisoner of war. He asks Rosalind to let Weaver back into her life and spy on him, because the FBI believe Weaver’s selling atomic secrets to the Russians.

Stirred right into this mix is the paradoxical culture of the early 1950’s. The war is over. People desperately want to be happy, to wear a smile again. But almost everyone is damaged by their war experiences. Many of the returning G.Is, like Charlie suffer from disabling PTSD. A large number of women, like Rosalind, have lost the jobs they loved, and have been relegated to being helpmates. The common trope of the day is the happy four person household with the wife in an apron and heels handing a stiff drink to the husband who’s loosening his tie after a long day. The children are playing quietly in the corner. Everyone is smiling, but in truth, almost no one is happy.

So here’s the cocktail of Atomic Love: a disgraced female scientist, a possible spy, an FBI agent looking for answers. All stirred into the backdrop of a scarred postwar America. To find out more, you’ll have to take a sip. 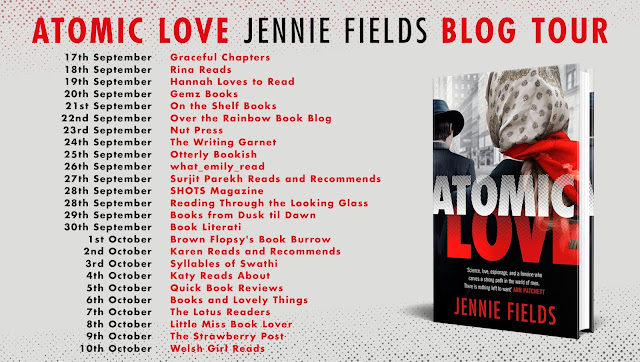 Atomic Love by Jennie Fields is published by Penguin Books on 17 September 2020 £12.99
Chicago, 1950. Rosalind Porter has always defied expectations - in her work as a physicist on the Manhattan Project to design the atomic bomb, and in her passionate love affair with coworker Thomas Weaver. Five years after the end of both, her guilt over the results of her work and her heartbreak over Weaver are intertwined. She has almost succeeded in resigning herself to a more conventional life . . . Then Weaver gets back in touch. But so does the FBI. Agent Charlie Szydlo wants Rosalind to spy on Weaver, whom the FBI suspects of selling nuclear secrets to Russia. As Rosalind's final assignment launches her on a dangerous mission to find the truth, she faces a heartbreaking choice . . . Believe the man who taught her how to love? Or trust the man who her love might save?
Posted by Ayo Onatade at 06:00