More crime stuff than you shake a stick at

Okay, it's been a fortnight since I got back from New York so why haven't I posted? It's been one hell of a roller coaster ride, I can tell you. Before I went to Thriller Fest 2007, I opted to have laser eye correction surgery. It was fine for a week, then the troubles began: sensitivity to light, an infection followed by a rare occurance where one eye thinks it's long sighted, the other short sighted. The result? Blurred vision. So 80% of the time the whole stay was out of focus. If you really want to find out a version of the trip, then nip over to Ali's three-parter blog at the Rap Sheet. But let me warn you, I do not know all the words to Dick Van Dyke's Chim Chiminee. And just for that, Ali. Here's a picture of you on one of your better days! 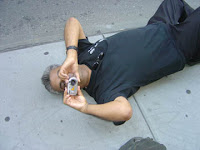 If you want an official view, then here is non better than Diane Voight:

Were you with us at ThrillerFest this month? If so, you're already aware of all of the amazing opportunities we presented to ITW members, readers, and industry professionals. If not, let me share a bit . . . .

More than 600 people attended, including more than 440 at the Second Annual Thriller Awards Banquet. Almost 200 ITW members had the chance to meet and mingle with the head mystery/suspense/thriller buyer for Borders, the head mystery/suspense/thriller buyer for Waldenbooks, the Vice President of Corporate Sales for Barnes & Noble, and media professionals from The Wall Street Journal, Publishers Weekly, Library Journal, Bookreporter.com, the BookBitch, and many more.

For a lengthy look, check out the blogosphere: http://therapsheet.blogspot.com/2007/07/escape-to-new-york-part-i_24.html 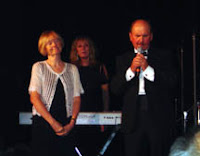 ThrillerMaster 2007 James Patterson was generous, funny, and a gentleman to one and all during ThrillerFest and when he accepted his lifetime achievement award for contributions to the Thriller genre Saturday night. ThrillerMaster 2006 Clive Cussler was charming, delightful, and gracious to fans of all stripes, but particularly in his presentation of the award to Jim. Of course, the Robert S. Levinson produced Awards Show featuring the Killer Thriller Band and the Killerettes was, well, to die for, as the California-types say. (My favorite part was the total surprise to me when David Morrell sang "Diane -uh." You haven't LIVED until you've been serenaded by Rambo, let me tell you!)

Throughout CraftFest and ThrillerFest, ITW continued its presentation of "firsts" including Spotlight Guest appearances by Lisa Gardner, Vince Flynn, Heather Graham, Clive Cussler, James Patterson and Jeffery Deaver, the most amazing slate anywhere of best selling authors on our CraftFest faculty, and activities such as games, contests, prizes and auctions. Fans were encouraged to talk to authors as they played ITW Author Bingo to qualify for two major prizes: a free admission to ThrillerFest 2008 and a complete autographed set of James Patterson's Alex Cross series. Fans were also eligible to win two Sony e-Readers and an iPod Nano, just to show our appreciation for the readers who support us. 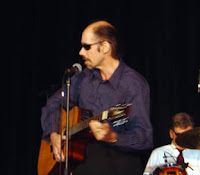 Those present at the Grand Finale Brunch were offered an exclusive opportunity to participate in our Thrilling Titles contest. Winners qualify for a drawing to award free tickets to ThrillerFest 2008. Were you there? If you were, you know the rules. Get your entries in! For information on submissions, check out the ITW web site: thrillerwriters.org


And speaking of amazing opportunities, both the CraftFest auction and the ThrillerMaster auction offered items unavailable anywhere else. The bidding was lively, to say the least. Lucky winning bidders purchased such items as full manuscript critiques from top New York agents, private coffee time with best selling ITW authors, character naming opportunities in upcoming best selling thrillers, and much, much more.

Once again, ThrillerFest was an amazing success thanks in no small part to the generous participation of ITW members, our hard working board, our amazing volunteers, and the outstanding staff at the Grand Hyatt Hotel. Most of all, ThrillerFest proved again to be a gathering of extraordinary people who created a special synergy all their own. If you were there, you know what I mean. If you weren't there, well, plan to join us next year and see for yourself!

The Anthony Award nominations have been announced with winners to be announced at Bouchercon Alaska - and notice Ali Karim our Assistant Editor has been nominated for an Anthony Award, go on, my son!

Mystery News and Deadly Pleasures
are pleased to announce the 2007 Barry Award nominations. The Barry Awards are named for of one of the most ardent and beloved ambassadors of mystery fiction, Barry Gardner,and are voted on by the readers of Mystery News and Deadly Pleasures.The 11th Annual Barry Awards presentation will take place at Bouchercon in Anchorage, Alaska in late September. The date, time and
location of the awards presentation will be announced later. This is the first year that the Barry Awards are co-sponsored by Mystery News.

"Cain was Innocent" by Simon Brett (Thou Shalt Not Kill, published by
Carroll & Graf)
"Shaping the Ends" by Judith Cutler (EQMM May, 2006)
"The Right Call" by Brendan DuBois (EQMM Sept/Oct, 2006)
"A Man of Taste" by Kate Ellis (EQMM Mar/Apr, 2006)
"Rosemary" by Paul Halter (The Night of the Wolf, published by Wildside Press)
"A Case for Inspector Ghote" by June Thomson (The Verdict of Us All,
published by Crippen & Landru)

For more information about the Barry Awards, visit the Mystery News
website at www.blackravenpress.com and the Deadly Pleasures website at
www.deadlypleasures.com. Questions about the awards and nominations can be directed to BarryAwards2007@gmail.com or caldrich@blackravenpress.com.

Congratulations to all of the nominees!

But it's sad to report the deaths of two great crime writers. R. D. Wingfield had already established a successful career in radio drama when he created the character of Inspector Jack Frost in 1972. The dishevelled, disobedient officer was nothing like the traditional crime thriller hero, and did not bring Wingfield critical or commercial success until the end of the 1980s. Although in the next decade David Jason's portrayal on ITV made Frost famous, Wingfield was never comfortable with the television interpretation of his creation.

Now follows the death of John Gardner. Author of more than 50 thrillers, including 14 James Bond books, John was a workaholic and recovered alcoholic who even in his 81st year was still writing at all hours. He worked every day - even a little on Christmas Day. "I work because I am scared stiff of losing the ability to put words together," he said. "Touch wood, it's never happened, but I have nightmares that it might."
Obituary in The Independent

San Diego, CA -- Multiple New York Times bestselling author David Morrell, creator of Rambo and father of the modern action novel, was honored with a surprise presentation of the legendary Inkpot Award during Comic-Con 2007. The annual four-day event, hosted by Comic-Con International, is dedicated to creating awareness of, and appreciation for, comics and related popular art forms. More than 125,000 people attended this year's sold-out event.

Co-founder of the International Thriller Writer's organization, Morrell is considered to be the pioneer of the modern action thriller. His award-winning first novel, First Blood, launched the iconic popular culture powerhouse, Rambo. Since then, he has written more than 28 books that have thrilled readers worldwide. Morrell's blockbuster novel Brotherhood of the Rose was developed into a popular NBC mini-series broadcast after the Super-Bowl in 1989. His new six-part comic book series Captain America: The Chosen debuts from Marvel in September 2007.

The Inkpot Award was presented to Morrell during Max Allan Collins' Spotlight Interview with the author. "During the interview, a Comic-Con representative came into the room/" Morrell said, "when Max stopped the interview, gave me a big smile and a wink, and said, ˜You're going to like this!". It was an utter surprise, as well as an exceptional honor."

Morrell is also a three-time recipient of the prestigious Bram Stoker award, most recently for his 2005 novel Creepers. You can visit the author at www.davidmorrell.net.

He was the king of the thriller, the master of conspiracy, and the creator of a superspy to rival Bond. But how has Robert Ludlum managed to write no fewer than 12 new bestsellers in the six years since his death? Rob Sharp takes up the trail. More in The Independent

Piatkus Books have bought British Commonwealth rights in six new suspense titles from New York Times bestselling author Allison Brennan, three paperback originals and three hardcovers.The deal was done via Lara Allen at Trident Media. Piatkus will publish the first three books – Killing Fear, Silent Scream and Dying Breath in March, August and October 2008, with the second series to be published simultaneously with the U.S. in 2009. Killing Fear is the story of former stripper, Sydney Dahl, whose testimony helped put a serial killer on death row. Only now the killer has escaped and is determined to get vengeance on those who put him behind bars. Gillian Green, Fiction Editorial Director, says: ‘Allison Brennan’s writing is an addictive blend of hard-edged suspense with a romance element with wonderfully gutsy heroines. Her success in the US has been phenomenal and we believe she’s going to appeal to fans of Tami Hoag, Tess Gerritsen and Lisa Gardner.’

Century Editorial Director, Hannah Black has acquired the next three books of the Liebermann series by Frank Tallis in a three book deal from agent Clare Alexander at Aitken Alexander Associates Limited. Set in fin-de-siecle Vienna, Frank Tallis - author and Harley Street psychologist - vividly brings to life Freud's world of coffee shops and salons abuzz with intellectual debate and cultural ferment. The first three books in the stylish and atmospheric psychoanalytic detective series (Mortal Mischief, Vienna Blood and Fatal Lies - published next January 2008) featuring Dr Max Liebermann, received wide critical acclaim. The Times: 'Tallis's writing and feel for the period are top class'; And the Literary Review: 'smart detection and a mouth-watering view of Viennese café society...good prospects for the Liebermann series..." Translation rights have been sold into 11 languages to date. MORTAL MISCHIEF and VIENNA BLOOD have already achieved bestseller status in France.The BBC has bought the TV rights to the Liebermann series to transmit in 2009. Hannah Black says,'As is borne out by the acclaim of readers and critics alike, Frank Tallis is a brilliantly smart author and a skilful storyteller. We're delighted to be publishing the next three books and look forward to his continued success. Frank is set to be a major player in crime fiction.' The first in this next series, THE KABBALIST, will be published by Century in January 2009 and in Arrow paperback in July 2009.

August 2007 will mark the tenth anniversary of Mystery Women and it would be lovely to celebrate the occasion. The group as many of you know was founded at St Hilda’s
Crime and Mystery Conference in August 1997 with the first meeting taking place on 31 August 1997.

Richard Reynolds of Heffers bookshop in Cambridge where we have held many events over the last ten years has always been a staunch supporter of the group. He has very kindly agreed to host a Mystery Women evening on 15 August to celebrate our anniversary. This would be a marvellous opportunity for a massive get together of Mystery Women members and I would urge all Mystery Women to come along and support the event.

The event will also be open to the public in support of the aims of the group – the promotion of crime fiction and in particular female writers that remains unchanged.
Please let us know (Lizzie or myself) whether or not you are planning on attending. If you are an author, please also let us know so that we can ensure that your books will be in stock at Heffers.

So far, some of the authors that have agreed to attend include Natasha Cooper, Adrian Magson, Mary Clarke. If you wish to attend, contact Ayo at Mystery Women.
Posted by Mike Stotter at 20:26

To celebrate your return - remember that wonderful song we sang with Larry Gandle that caused an international incident?