of festivals, deaths and crime books ....

EDINBURGH INTERNATIONAL BOOK FESTIVAL
Authors appear to fall peculiarly in love with (and sometimes at) the Edinburgh International Book Festival, as do audiences. This is the biggest festival of its kind in the world (more than 700 events in 17 days this summer), fuelled and fed by ardent demand. It more than 215,000 visitors last year. Writers, mighty and modest, fêted and unfamiliar, flock to the festival from all parts of the planet. Although many events are sold out there are hundreds with tickets still available including; seasoned actress Jane Lapotaire, Alexander McCall Smith (on the 15th), Life of Pi author Yann Martel, renowned writers and commentators Ghada Karmi and Ilan Pappe, Raj Persaud, Edmund White, Philip Gourevitch and many more. This year Peter Guttridge is in attendance and will file his film column from there. Also another SHOTS regular, Calum MacLeod, will attend with his journalistic hat on. To read more go to Item in The Times
RADIO PENGUIN
Spoken word radio station, Oneword, will learn about its future direction in the next few weeks, following Channel 4's award of a major new digital network, comprising 10 national stations on DAB Radio. Meanwhile, Penguin has received a boost by becoming the only book publisher with guaranteed coverage on the new network, with a series of podcasts planned. Discussions are now taking place between Oneword and Channel 4, following the award of the licence from regulatory body Ofcom in July. This will see Channel 4 rival the BBC on radio with a range of news, speech, arts and niche music stations to be launched from next July. Three of the stations will be run by Channel 4, the rest hosted by other parts of the winning consortium including BSkyB and Emap. Channel 4 bought a 51% stake in Oneword in 2005, with the other 49% owned by broadcast company UBC Media. Oneword is not included in the new network, while Channel 4 has recently experimented with a news show on the station, presented by Jon Snow. Hat tip Item in PN
RICK MOFINA

I had the pleasure in meeting Rick at ThrillerFest New York. To say we had a laugh is an understatement. Anyhow, he has sent me news on his thriller A PERFECT GRAVE will be release the week of Sept 2. 2007. It is a mass market pbo, North American release through Kensington's Pinnacle line out of NYC. While it does not have a UK release it will be available via on line sites and some specialty independents. But good news for UK readers is that Rick has been picked up by MIRA UK and they are going to publish him in 2008/2009.
QUERCUS PUBLISHERS
Quercus Publishing is bullish after nearly quadrupling sales to £3 million and doubling losses to £340,000 in the first half year. The PLUS-quoted company, chaired by veteran publisher Anthony Cheetham, achieved interim turnover almost as much as for the whole of 2006. During the first six months of the year, Quercus launched the first six titles of its new mass-market paperback division. One of its titles, Peter Temple’s The Broken Shore, won the 2007 Duncan Lawrie Dagger, the world’s richest crime award. We will be publishing an interview with Peter later this month.
Now this sounds like a plot for a book…

A Polish writer is on trial for murder after writing a crime novel in which he closely detailed the facts of a real-life killing. Investigators claim Krystian Bala, 33, a travel writer, journalist and author, even sent them a copy of his popular novel Amok in which he gives a detailed account of a murder, in order to draw attention to it. But suspicious police thought his account too close to the murder of a man whose body was found near a weir on the river Oder in December 2000. Item in The Guardian You may be interested in reading this follow up post
THE RIPSTER
With a few minutes on his hands after completing his next Getting Away With Murder column, Mike Ripley got a call from the Guardian wanting to pay me money for writing Rodney Wingfield's obit. He mentioned that John Gardner had popped too and promptly got the job to do him as well! So beware, we might have to rename him R.I.P.ster.
DON BRUNS remembers JOHN D. MacDONALD
My fellow panelist Don Bruns, who writes a mean Florida novel, remembers prolific Florida writer John D. MacDonald.:
Point Crisp Road, according to John D. Macdonald, is a 'spit' of land that runs off of Siesta Key, Florida, and was named after a robber-barron named Crisp who probably won it in a crooked poker game. The house that John D. build and wrote many of his Travis McGee books is almost to the end of that spit of land. On a road where more than half of the houses have been bulldozed and mansions have sprung up where humble ranch style homes once stood, Macdonald's home remains as he left it.
The property is now owned by a doctor and his family, who are proud of the literary history of the home. In a loft that is off the living room and up a small flight of stairs, you can see the open water in front of the house, and in back of the house. Peaceful, serene, a quiet setting that gave the father of the Florida mystery genre the solitude he needed to write his incredible stories. 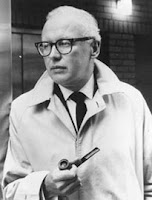 In the parlor, the doctor will tell you, is where Hemmingway once played chess with the mystery writer, and a slew of famous friends came and visited with John D.
John D. was born July 24th, 1916 in Sharon, Pennsylvania, and while his birthplace is far from the sites he made famous, far from Cedar Key, and the wonderful world he created with his boat, the Busted Flush, I choose to remember Macdonald's home in Sarasota. The one on the spit of lad called Point Crisp. On his birthday, I'd like to be there, and try to soak up some of the brilliance he showed as a writer. On the anniversary of his death, December 28th (1986) I will be there. I'll drive out to the point and watch the water, and maybe take a copy of The Green Ripper, and re-read some of my favorite parts.