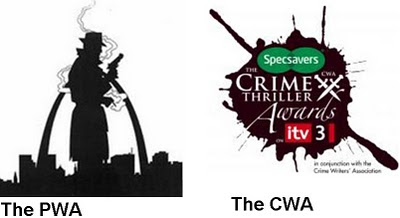 As I gear up for Bouchercon 2010 in San Francisco, I have secured tickets for the Private Eye Writers of America Annual Shamus Awards. The Nominations have just been released – A tip of the Hat to our Pulpetti friend in Finland for the list - and Shots Pass congratulations to all the nominated authors and writers -

While back in the UK, we have the final shortlists for the remaining CWA Daggers –
CWA GOLD DAGGER 2010
Blacklands by Belinda Bauer (Corgi/Transworld)
Blood Harvest by S J Bolton (Bantam Press/Transworld)
Shadowplay by Karen Campbell (Hodder & Stoughton)
The Way Home by George Pelecanos (Orion)
CWA IAN FLEMING STEEL DAGGER 2010
SPONSORED BY IAN FLEMING PUBLICATIONS LTD
A Loyal Spy by Simon Conway (Hodder & Stoughton)
Innocent by Scott Turow (Mantle)
The Dying Light by Henry Porter (Orion)
The Gentlemen's Hour by Don Winslow (Heinemann/Random House)
CWA JOHN CREASEY (NEW BLOOD) DAGGER 2010
Acts of Violence by Ryan David Jahn (Macmillan New Writing)
Rupture by Simon Lelic (Picador)
The Holy Thief by William Ryan (Mantle)
The Pull of the Moon by Diane Janes (Constable & Robinson)
The announcement of these finalists coincides with the launch of the completely integrated Crime Thriller promotional period which will see posters and stickered books in shops and supermarkets, coverage in the press, and trailers on ITV1 and ITV3. The initiative has the support of leading publishers and highstreet retailers and is now well established as a major industry-wide event.
Forming the basis of the official Specsavers Crime Thriller Season, ITV3 will start a six-week run of brand new crime and thriller documentaries on Tuesday 31st August. These hour-long documentaries will focus on TV’s greatest detectives and showcase the shortlisted novels in the book award categories.
In this major new TV campaign, in the six weeks leading up to The Specsavers Crime Thriller Awards 2010, the British public will get the chance to vote for their favourite TV detective of all time. Over the six-week season of documentaries on ITV3, twelve different fictional detectives will be profiled - each of them a nominee for ‘The People’s Detective’ Dagger, which will be presented at The Specsavers Crime Thriller Awards.
More information Here
Posted by Ali Karim at 18:48