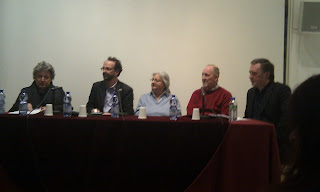 On Monday 7 February the Italian Cultural Institute in London played host to Italian author Alessandro Perissinotto (along with a translator) whose first novel in a trilogy Blood Sisters (Una Piccola Storia Ignobile) has recently been published by Hersilia Press. Perissinotto was interviewed by crime critic Barry Forshaw and was joined by author Michael Gregorio (Michael G Jacob and Daniela De Gregorio).

Born in 1964 Alessandro Perissinotto is a Professor at Turin University and also writes articles and comments on homicide for the Italian newspaper La Stampa. Perissinotto explained that the strict translation of the title from Italian to English would have been A Short Ignoble Story but that he had been impressed with the change of the title to Blood Sisters as it gave a sense of what the story is about. Perissinotto went on to say that he did not do much reading as a boy and that he had actually intended to become a mechanic for Fiat. When asked if he read any other Italian authors he explained that he did enjoy reading Andrea Camilleri but that he found that Camilleri wrote too fast for him to keep up with. The fascination with translation of Scandinavian novels was also raised with the question being why had Italian novels not been caught up with the trend especially since there were a number of good Italian crime writers around. Perissinotto thought that commercial success did not always equal literary success. He went on to explain that in Italy there was a desire to write novels that talked about reality and they appeared to have achieved quite a lot of success with this. There had also been a change in the way that crime novels were now seen in Italy. Before they had been looked down on but this had now changed.

The author also explained that the idea of lies and truth were very important in the story. The follow-up to Blood Sisters is L'ultima notte bianca (but not yet published) is also about someone that disappears.

Alessandro Perissinotto was also asked how many of his novels were taken from real events and he explained that he had been unable to write about a number of them in the newspaper and that some of his stories did have a background in reality. Alessandro Perissinotto also admitted that there was a strong regional bias when it came to thrillers and crime novels because they were about the area.

Michael Gregorio were also asked how did they manage to come up with their name and they explained that it came about after a three way discussion with their editors in the UK and in the US. They also explained that they had found the first book a bit intimidating to write. They also explained how they split the writing duties. They worked a lot on the plot outline and then decided who would write which chapter. They knew each other’s weaknesses so it was fairly easy for them to write this way.