Today’s guest blog is by Jon Jefferson, American author, journalist, and documentary maker. Consulting with forensic anthropologist Bill Bass, Jon writes the New York Times bestselling series of Body Farm novels, published under the pen name Jefferson Bass. The new novel – published 26 April, 2012 – is The Bones of Avignon (titled The Inquisitor’s Key in the U.S.). Medieval mystery meets modern murder in this richly layered dual narrative, which combines cutting-edge forensics with the excitement of The Da Vinci Code … and the historical lushness of Girl with a Pearl Earring.

I traveled to France last spring to research this novel, and I found myself in new and exotic territory. Not only was I taking our heroes, forensic anthropologists Bill Brockton and Miranda Lovelady, overseas; I was also taking them, in a manner of speaking, seven centuries into the past, because that’s when the seeds of the modern-day murder were sown.

Back in the 1300s, Avignon was Europe’s crossroads of money and power. For most of that century it was the seat of the popes, and home to the most lavish court on the continent. After I decided to set a crime novel in Avignon, I began constructing a plot that tied a medieval mystery to a modern-day murder. In my mind’s eye, I pictured myself weaving a medieval-meets-modern tapestry – a tapestry whose warp and woof were spun gold and ballistic nylon.

By the time I arrived in Avignon, I’d read a cartload of books about papal intrigues and power-grabs; I’d even chosen a villain for the medieval backstory: a heretic-obsessed Inquisitor who interrogated and burned his way all the way up to the papal throne. I was fully prepared to be dazzled by the splendor of the Palace of the Popes, the biggest Gothic palace in all of Europe. I was not, however, prepared to be blown away by something much smaller, far humbler, and two centuries older than the mighty papal fortress.

Off a narrow street in the labyrinth of old Avignon one day, I ducked through a narrow archway and down a short corridor, emerging into an austere little courtyard. Folded canvas umbrellas and a few small café tables occupied one shabby, smelly corner, which was littered with pigeon droppings. On the far side of the courtyard was a high, weather-beaten stone wall. Ornate stone tracery marked the outlines of what had once been Gothic stained-glass windows, but those windows had long since been filled with crude stone blockwork. 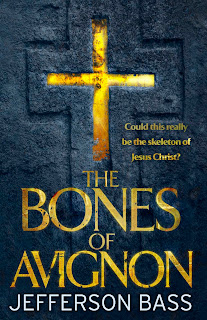 A wooden door in the wall led me into the structure itself, which was once the 12th-century chapel of the Knights Templar, the warrior-monks of the Middle Ages. The Templars’ original mission was escorting Christian pilgrims safely to the Holy Land, but they evolved into the first international banking and credit-card empire. Pilgrims heading from France to Jerusalem would deposit money with the Templars in, say, Paris or Avignon and would receive letters of credit to take on their journey. Upon arrival in Jerusalem, they’d present the letters of credit at the Templars’ fortress on the Temple Mount, and they’d get their money back – minus a handling fee, of course. This banking empire made the Templars remarkably rich. It funded construction of a string of fortresses and a private navy. And it made the Templars the go-to source for cash when monarchs like King Philip IV of France needed big loans.

Smart bankers made the Templars rich, but braver warriors made them legendary. In 1177, during the Battle of Montgisard—25 miles northwest of Jerusalem—a small force of 475 Templar knights and a few thousand infantrymen decimated an army of 26,000, led by the mighty Muslim sultan Saladin. The victory made Templars the stuff of legend, myth, and fascination– fascination that has spawned elaborate modern conspiracy theories. The Da Vinci Code claimed that secret modern-day Templars guard the descendants of Jesus and Mary Magdalene; Indiana Jones and the Last Crusade had an ancient Knight Templar standing guard over the Holy Grail. That’s horse puckey, as my grandmother would say—fun horse puckey, of course, but horse puckey nonetheless. The real-life end of the Templars’ story is as epic as any blockbuster … and a lot more tragic.

I mentioned that a cash-strapped King Philip IV was one of the monarchs who borrowed heavily from the Templars’ coffers. King Philip couldn’t, or wouldn’t, pay back the loan, so in 1307, he pressured Pope Clement V—the first pope to reign from Avignon—to help him destroy his creditors. The king issued warrants for Knights Templar throughout France, arresting them on trumped-up charges of idolatry, heresy, and acts of sexual perversion. “God is not pleased,” the arrest warrant began. “We have enemies of the faith in the kingdom.” The king’s agents swiftly rounded up the knights, and Pope Clement dissolved the order.

Dozens of those arrested were tortured to death, and in a gruesome, two-day spectacle in 1310, King Philip burned 54 Knights Templar at the stake. But he kept four of the order’s top leaders in prison. Finally, in March 1314, the final four Templars were led from prison and into Notre Dame square, where—having confessed to all crimes attributed to them—they were to be spared death and sentenced to life imprisonment instead. But there, in front of the crowd, the head of the order—71-year-old Jacques de Molay—infuriated the king by recanting, shouting that he’d confessed only to stop the torture. By sundown, de Molay and his chief lieutenant were burning at the stake, and the Templars were destroyed. 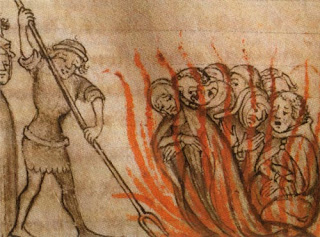 The destruction of the Knights Templar was a shameful chapter in the history of France. It was an equally shameful blot on the reputation of the pope. (I found myself ironically asking, “Who would Jesus burn?”)

Seven centuries after the Templars were destroyed, their chapel in Avignon has been renovated. When I stepped through the wooden door set into that weatherbeaten wall, I found myself in a cozy, modern theater and conference center, equipped with auditorium-style seats and high-intensity spotlights. But the ghosts of the pasts, the ghosts of martyred Templars, kept whispering in my ear, and I ended up making the chapel – the renovated, present-day chapel – the setting for a powerful, pivotal scene in the novel.

What scene, you may ask? Ask all you want; wild horses—and inquisitorial tortures — couldn’t drag the answer out of me…

The book trailer for The Bones of Avignon can be seen below.

Jon Jefferson is the “writer” half of Jefferson Bass. The Bones of Avignon (Quercus, £18.99) will be published 26 April; the U.S. edition, The Inquisitor’s Key (William Morrow, $25.99) goes on sale 8 May. Meanwhile, an original e-story—an Avignon-based prequel, “Madonna and Corpse”—goes on sale ahead of time to whet appetites. Check your favorite e-publisher for details!

See also Quercus blog for more information on The Bones of Avignon.

A fascinating and horrible history. As much as I love the forensics, I'm really looking forward to the historical angle. I love learning something while I read, and I particularly love history, which is one reason why I really enjoyed Bones of Betrayal -- that great World War II storyline.

Thanks for a taste of what is to come in The Inquisitor's Key. It sounds like it's really going to hit all the right notes for me.