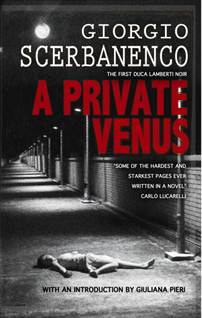 Fans of Italian noir and Hersilia Press will be pleased to learn that in August 2012 Hersilia  Press will publish A Private Venus.

Shots were delighted to receive the press release below from Hersilia Press.

Giorgio Scerbanenco is considered by many to be the father of Italian noir and has been called 'the Italian Simenon'. He worked as a journalist and as a contributor to women's magazines before turning to crime fiction. The most prestigious Italian literary prize for crime fiction is named after him.

A Private Venus
Milan, 1966, and in the bleak suburb of Metanopoli, a woman is found dead on the side of the road.

Dr Duca Lamberti has just been released from prison, where he has spent three years for having practiced euthanasia.  No longer able to work in medicine, he takes a job helping Davide, a young and depressed alcoholic.  When Duca begins to delve into the young man’s past, he is drawn into a murky world of prostitution, pornography and murder.  As the case unravels, Duca takes the law into his own hands.

The first in this classic series featuring Duca Lamberti.

Howard Curtis has translated more than fifty books from French, Italian and Spanish, including works by Luigi Pirandello, Beppe Fenoglio, Georges Simenon and Gianrico Carofiglio.  His translation of Edoardo Albinati’s Coming Back was awarded the John Florio Prize in 2004, and his translation of Pietro Grossi's Fists was awarded the Premio Campiello Great Britain in 2010.
For further information, please contact Ilaria Meliconi at Hersilia Press on 0775 1484357 or email info@hersilia-press.co.uk