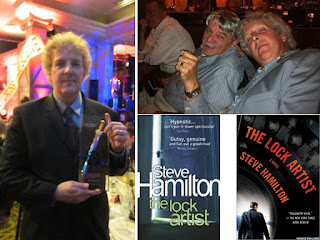 
Shots are delighted to announce this exciting news from Minotaur Books / Orion Publishing, and if you’ve not read this remarkable novel, you have a treat in store.Los Angeles: (6/13/12) - Screenwriter/producer Shane Salerno has acquired the film rights to the award winning novel The Lock Artist by New York Times bestselling author Steve Hamilton. The novel, published by Minotaur Books [US] and Orion Publishing [UK], won the prestigious Edgar® Award for Best Novel of the Year. It was also awarded the 2011 CWA Ian Fleming Steel Dagger and was chosen as a New York Times Notable Book.

Salerno will co-write the screenplay with the author and produce the film. He will take the project to filmmakers shortly.

Previous Edgar® Award-winning novels include Day of the Jackal by Frederick Forsyth, The Spy Who Came in From the Cold by John Le Carré, and The Long Goodbye by Raymond Chandler. Hamilton joins Ross Thomas as the only other author in history to win Edgars® for both Best First Novel and Best Novel.

The intention is to follow a similar path to the screen as Salerno help engineer for Don Winslow's acclaimed crime novel Savages. After Salerno read the first fourteen pages of Savages he worked closely with Winslow to develop the book. Like The Lock Artist, Savages went on to become a critically praised novel that was voted one of the ten best books of 2010 by The New York Times, Entertainment Weekly, The Los Angeles Times and other publications.

Savages was developed directly with Oliver Stone and then shopped to studios. It resulted in a three-studio bidding war won by Universal Pictures. Salerno is co-writer of the screenplay and executive producer of Savages. The film went from the initial option to Oliver Stone to shooting in eleven months and from sale to Universal to shooting in just four months. It will be released on July 6, 2012. A prequel novel, The Kings of Cool, will be released on June 19, 2012. Salerno has also sold the spy thriller Satori to Warner Brothers, with Leonardo DiCaprio to star. Salerno is co-writing the screenplay with Don Winslow (based on his novel) and is also executive producer. Salerno is also producing the exciting team up of crime novelists Chuck Hogan and Don Winslow which is being written on spec similar to Cormac McCarthy's The Counselor. Hamilton's deal was negotiated by Mary Alice Kier and Anna Cottle of Cine/Lit on behalf of the Jane Chelius Literary Agency. CAA and Robert Offer represented Salerno.