Lucy Ribchester on Choosing Your Weapon:Selecting a fictional detective…

Today’s guest blog is by author Lucy Ribchester who is a dance and fiction writer based in Edinburgh. Her debut novel The Hourglass Factory is set around the suffragette movement.

It’s often hard to remember what sets you off on a particular story. For me it’s usually the setting that comes first, not necessarily time-period specific but more of a general atmosphere or impression. In the case of The Hourglass Factory it was music halls and suffragettes that hooked me in – a hazy image of ballsy, brassy women getting their bloomers out on trapezes and vandalising the Houses of Parliament. Once I’d established this was the Edwardian era (Edwardian in historical terms commonly goes up until the start of World War I) I had to pick a year. 1912, for reasons apparent in the prologue, was the obvious choice. And once you’ve made the decision to write a crime novel, that’s when the brain has to kick into action and get you thinking about who the most important person skulking around this world will be; your fictional detective.

Detective might be a bit of a misnomer. As Agatha Christie knew, sometimes the greatest criminal-pinching minds are found in the most unexpected places (imagine having Miss Marple as your next door neighbour, you’d never even dare nick a biscuit from the village hall coffee morning). It’s true that the most common fictional detectives are usually members of the police or some form of law-keeper (CJ Samson uses a lawyer, SJ Parris a spy), but sometimes this just isn’t possible. If you want your detective to be a woman and you’re a historical fiction writer aiming to keep some semblance of reality to the period, your professional options are somewhat limited. Victorian writer Andrew Forrester got round this by making his Lady Detective a private investigator working to select commissions. Ann Granger in her Lizzie Martin series cleverly uses a woman in a relationship with (and later married to) a police officer, who shares the brain work in her other half’s investigations. But when searching for a professional woman with access to - and an interest in - crime scenes, the obvious choice to me seemed to be a journalist.

Frankie George, Hourglass Factory protagonist, came kicking and stomping out of my head after I’d read about male impersonators, latch-key girls and those bastions of the sexist establishment, the Ladies’ Pages of Edwardian newspapers. I don’t feel, looking back on it, as if I made many conscious decisions about her character, but I did need to decide how it was that she would have the resources and the reasons to investigate a crime. Putting her into the most frustrating position imaginable for a woman who wants to be taken seriously was the starting point, thus Frankie writes for the London Evening Gazette’s Ladies Page and is only given more serious journalistic fodder when a suffragette the men have never heard of comes to their attention – in other words, she is never allowed to forget that she is not just a journalist but a female journalist. This gave her a reason to want to get stuck into something juicier off her own bat, and the desire to keep at it come what may.

I’d come across the rise of the so-called “latch-key girls” in a couple of history books, but the best summary of their effect on society was in Vita Sackville-West’s The Edwardians. “Eadred Templecombe says England is going to the dogs”, says Lucy, Duchess of Chevron at one point. “It really looks like it, when girls like Viola can defy their own mothers and go off to live by themselves in London.” This showed me that there were young women making their own way, causing tension amongst traditionalists, and made it possible for me to create a self-reliant character who would feasibly generate her own income. 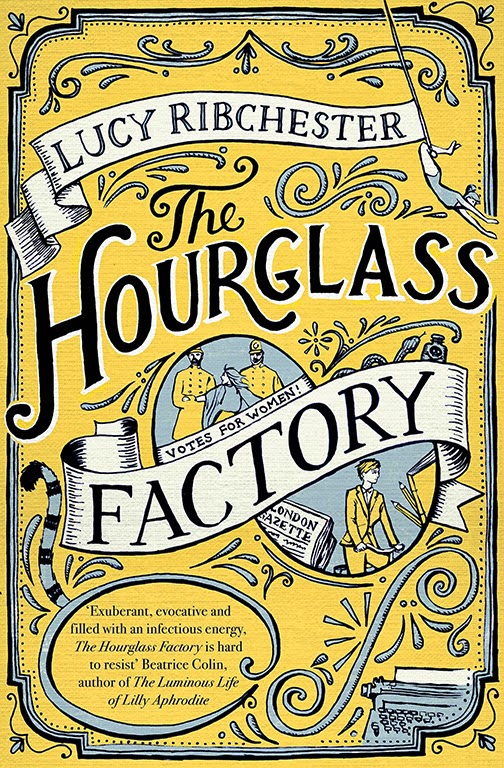 clothing when not on stage, apart from suffragette chauffer Vera Holme, who wore a man’s-style uniform. But I liked her as a style counterpart to orientalist Milly and corset-wearing Ebony so the trousers stuck.

When it comes to resources, Frankie doesn’t really have any, except her own tenacity, and here was where research into journalism came in handy. Elizabeth Banks’s 1902 Autobiography of a Newspaper Girl sees her running all over London in search of stories, going undercover in laundry houses and answering adverts for a parlour maid, all with the hope of flogging her scoops on spec to Fleet Street editors. Life was hard for freelancers of both genders but possible with a hand-to-mouth and a devil-may-care attitude. It was this that made me think that even if Frankie’s paper abandoned her – as happens in the book - she would be able to make her own inroads into a criminal investigation. In other words, she would be the detective up to the task of taking down the most dastardly of villains.