The 2016 CWA Daggers were presented at a glitzy event in London on October 11, 2016. And, for the first time since 2007 when Gillian Flynn won two Daggers, Bill Beverly took the Gold and John Creasey New Blood Dagger for Dodgers. In fact, Bill is the first male writer to do so since Jeffrey Deaver, so he is in good company. 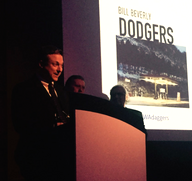 CWA Goldsboro Gold Dagger (for the best crime novel of the year): Dodgers, by Bill Beverly (No Exit Press)

CWA Ian Fleming Steel Dagger (for the best crime thriller of the year): The Cartel, by Don Winslow (William Heinemann)

Also nominated: The House at Baker Street, by Michelle Birkby (Pan); The Other Side of Silence, by Philip Kerr (Quercus); A Book of Scars, by William Shaw (Quercus); The Jazz Files, by Fiona Veitch Smith (Lion Fiction); and Striking Murder, by A.J. Wright (Allison & Busby)

CWA Non-fiction Dagger: You Could Do Something Amazing with Your Life (You Are Raoul Moat), by Andrew Hankinson (Scribe)

Also nominated: The Golden Age of Murder: The Mystery of the Writers Who Invented the Modern Detective Story, by Martin Edwards (HarperCollins); Sexy Beasts: The Hatton Garden Mob, by Wensley Clarkson (Quercus); A Very Expensive Poison: The Definitive Story of the Murder of Litvinenko and Russia’s War with the West, by Luke Harding (Guardian Faber); Jeremy Hutchinson’s Case Histories: From Lady Chatterley’s Lover to Howard Marks, by Thomas Grant (John Murray); and John le Carré: The Biography, by Adam Sisman (Bloomsbury)

CWA Short Story Dagger (for a short crime story published in the UK): “On the Anatomization of an Unknown Man (1637) by Frans Mier,” by John Connolly (from Nocturnes 2: Night Music, by John Connolly; Hodder & Stoughton)

Also nominated: “As Alice Did,” by Andrea Camilleri (from Montalbano’s First Cases, by Andrea Camilleri; Pan Macmillan); “Holmes on the Range: A Tale of the Caxton Private Lending Library & Book Depository,” by John Connolly (from Nocturnes 2: Night Music); “Bryant & May and the Nameless Woman,” by Christopher Fowler (from London’s Glory, by Christopher Fowler; Bantam); “Stray Bullets,” by Alberto Barrera (from Crimes, by Alberto Barrera Tyszka; MacLehose Press); and “Rosenlaui,” by Conrad Williams (from The Mammoth Book of the Adventures of Moriarty: The Secret Life of Sherlock Holmes’s Nemesis, edited by Maxim Jakubowski; Constable & Robinson)

CWA International Dagger (for crime fiction translated into English and published in the UK): The Great Swindle, by Pierre Lemaître; translated by Frank Wynne (MacLehose Press)

CWA Dagger in the Library (for the author of the most enjoyed collection of work in libraries): Elly Griffiths, published by Quercus

Debut Dagger (for the opening of a crime novel by an author with no publishing contract): Wimmera, by Mark Brandi

Also nominated: Dark Valley, by John Kennedy; The Devil’s Dice, by Roz Watkins; A Reconstructed Man, by Graham Brack; and A State of Grace, by Rita Catching

If you’d like brief descriptions of each book in the competition, refer to the CWA Web site.
Posted by Mike Stotter at 08:57