Independent publisher Ostara are playing it strictly for laughs with their Autumn crime releases, with new editions of two Nick Madrid ‘escapades’ by novelist, critic and doyen of the literary festival scene Peter Guttridge. 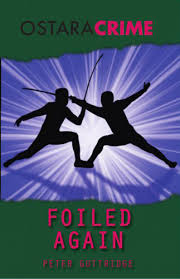 The adventures of Guttridge’s yoga-practising, accident-prone, self-depreciating journalist Nick Madrid have always combined a deep affection for the worst excesses of Fleet Street with outrageously farcical situations and the delivery of a stand-up comedian.
In Foiled Again the plot ranges from an accidental death during an international fencing competition to the uncovering of a piece of shady family history from the 1930s and the rise of the fascist Blackshirt movement. Along the way, there’s a rather revolting art exhibition called ‘The Shock of the Poo’, a night club for sado-masochists, a coven of fanatical Sylvia Plath fanatics, Russian Mafiosi, Colombian drug lords and the vexed question of why Madrid is such an unusual surname in Burnley…
Cast Adrift reflects one of the author’s other areas of expertise, Hollywood, in a merciless satire on movie-making, specifically the making of a low budget (a very low budget) pirate movie, which is also a musical, on location  somewhere suspiciously near the Caribbean. When the main cast of characters get involved with real, modern-day pirates and the sole survivor of a desert island survivalist TV game show, there seems little chance of anyone sticking to the script – assuming there ever was one. 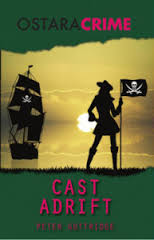 The late Reginald Hill described Peter Guttridge’s early comic crime novels as ‘fast-moving, laugh-a-line frolics’ and the Nick Madrid novels became famous for their trade-mark trait of having the hapless hero always falling foul of the local wildlife wherever the story was set.
Since 2004, Peter Guttridge has concentrated on more serious fiction including his much admired ‘Brighton series’ of crime novels, novellas and short stories, one of which won the 2016 Margery Allingham Short Story Competition.

Foiled Again and Cast Adrift are now available as Ostara Crime paperbacks and eBooks.
Posted by Ayo Onatade at 00:30