A Look in the Mirror by Karen Ellis

What is it about the criminal mind that people find so fascinating?  We read books about characters whose behaviour crosses limits, we watch film and television about crime and punishment, we soak up news about the latest terrible thing to happen to an innocent bystander…who could have been ourselves.  And some of us also spend a good portion of our time researching and writing stories about characters who suffer at the hands of criminals and the police who devote themselves to stopping the madness. 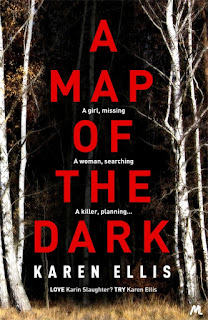 For me, as a novelist working in the crime genre, the fascination lies not in the violence itself but the internal workings of a human mind that produces the actions that lead to it.  In this glorious, gruesome soup of humanity that is life on earth, this communal journey at once prosaic and profound, why do a few people stray so far from what most of us consider acceptable behavior and do things that terrify the rest of us?  Nature or nurture?  A brain tumor?  Childhood abuse?  Bad genes?  Why?  Especially when so many of the rest of us, including the cops, manage to overcome our own life challenges and live essentially decent lives.

This is something I explore in A Map of the Dark, my novel about a troubled FBI investigator who battles her own demons while hunting down a notorious serial murderer.  Special Agent Elsa Myers does good, repeatedly, but deep down she isn’t all good and it haunts her.

Therein lies what I believe is the real power of suspense; it’s always psychological, rooted in a complexity of the human condition that pits every single one of us against our worst instincts.  Most of us overcome negative impulses, learn to put them in their places and live lives that emphasize and develop our better selves.  Others don’t, or can’t.  Why did Mother Teresa, for example, swing to one extreme on the spectrum of human potential?  Why did, say, Jeffrey Dahmer swing to the other far extreme?  Why do some people care so deeply that they spend their lives fighting crime?  Why are others content to turn a blind eye and pretend it has nothing to do with them when in fact is has everything to do with them?  The scale of good and evil involves, and expresses, each and every one of us.  And that, I believe, is why we’re so fascinated by it:  because, true narcissists that we humans are, we yearn to understand ourselves.  Crime stories are a form of mirror gazing in bright light, a chance to examine and possibly understand ourselves for what we really are, have been, or might be.

This is also why I love reading novels as much as writing them.  Regardless of how a book is categorized by genre and sub-genre, if there’s a full-minded conflicted character at the heart of it, I want to be there.  Though (for me) it only works its real magic if the author can truly write, wielding the fine tools of language to bring shape and nuance to the plight of a tortured mind.  This is the durable power of crime writing greats like Patricia Highsmith.  It’s why author John Fowles’ first novel, The Collector, still rings chillingly true.  Why Truman Copote’s In Cold Blood was so influential that it defined a new genre of “creative nonfiction.”  And it’s why Lolita, Vladimir Nabokov’s gorgeously written tale of a predatory pedophile, is powerful both as thriller and literary tour de force.  Each of these authors wrote what today we call “thrillers” at one point or another, regardless of whether their legacies are now fixed in the canon as “crime writers” or “authors of literature.”

By melding a storyteller’s artistry with an all too human fascination with why we are the way we are, we are brought deeply inside a universal hunger to understand the problem of good vs. evil.  In this strange space, we are invited to explore the most human of conflicts.  We identify with these characters and their stories because in them we see the terrifying image of ourselves in all our contradictory potential.  And it scares us.

A Map of the Dark by Karen Ellis (Published by Hodder and Stoughton)
FBI Agent Elsa Myers finds missing people. She knows how it feels to be lost. Though her father lies dying in a hospital north of New York City, Elsa cannot refuse a call for help. A teenage girl has gone missing from Forest Hills, Queens, and during the critical first hours of the case, a series of false leads hides the fact that she did not go willingly. With each passing hour, as the hunt for Ruby deepens into a search for a man who may have been killing for years, the case starts to get underneath Elsa's skin. Everything she has buried - her fraught relationship with her sister and niece, her self-destructive past, her mother's death - threatens to resurface, with devastating consequences.

Read the Shots review here.
Posted by Ayo Onatade at 06:00