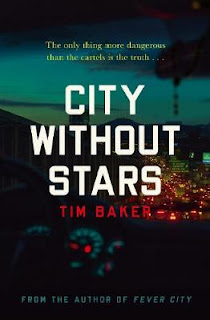 As a deadly war between rival cartels erupts in Mexico, and a shocking sequence of serial killings continues unabated, a female activist and a renegade cop form an uneasy alliance to try to bring down the narcos. Tim Baker discusses the borderland where his new epic crime thriller, CITY WITHOUT STARS, is set . . .
For a landscape so often associated with violence and crime, the border region between Mexico and the United States is surprisingly beautiful. True to the complexities of its history, the area is rich in natural diversity. There are huge dunes of “singing sands” that hum eerily in the wind, dense “sky island” type mountain ranges with a spectacular array of flora and fauna, and remote, blue-hued canyons.
This stark beauty is in contrast to the region’s narrative over the last two decades: desperate immigrants exploited by vicious people smugglers; ruthless criminals trafficking narcotics one way and guns the other; and the devastating scourge of hundreds of women kidnapped and murdered by unknown killers.
When starting out on my novel, I struggled to reconcile these contradictions until the day I came across a legend that captured my imagination. In 1911, a group of Mexican volunteers answered the revolutionary call of Pancho Villa and crossed the dunes to join his irregulars.
Only they never made it. They were found dead weeks later, their lungs full of sand despite there being no record of any windstorms. They had literally drowned in sand.
The more I thought about it, the more incredible it seemed. And yet that impossibility helped me to embrace all the other paradoxes that I would encounter researching my novel. I began to understand that the greatest wall of all is not the one that runs along a border but the one that our minds put up against stories that challenge our own sense of reality.
It was an insight that prepared me for what was to come – the realisation that in el mondo narco – the insane narco universe – anything and everything was possible, and that the writer’s duty was not to question but to embrace those extremes . . .
Tim Baker’s debut thriller, FEVER CITY, was shortlisted for the CWA John Creasey New Blood Dagger and the Private Eye Writers of America’s Shamus Award.


CITY WITHOUT STARS is published by Faber & Faber in January (£12.99)
In Ciudad Real, Mexico, women are being thrown into the trash - raped, murdered and mutilated. The police have reported 300 deaths of young maquiladora girls from the factories, yet not found a single clue or suspect. But union agitator Pilar knows the number of deaths is more like 800, and that the lazy and corrupt police are the least likely to resolve the situation.  Fuentes is a different kind of police officer. When his colleagues start shutting down his investigations into the deaths, he knows the roots of this mass-murder cover-up must stretch wide – into his own force. Some of his colleagues are definitely on the payroll with narco thugs like El Santo. But why is Padre Marcio, Mexico’s hallowed orphan rescuer, appearing in the investigation too?  The more Fuentes and Pilar learn, the more they find themselves in danger. Can the two of them expose the truth when so many around them want to bury it?
Posted by Ayo Onatade at 06:00