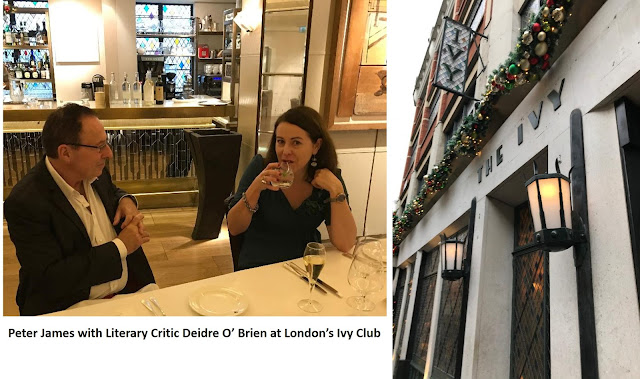 Many of us cling to traditions, especially when the Christmas and Hanukkah Holidays approach.

I have traditional reads from authors I have followed over many years, like Lee Child, Martina Cole, Harlan Coben, Michael Connelly, John Connolly, Peter May and Thomas Harris to name just a few – These are writers that provoke deep thought, introspection as the pages turn. I could name many more; many more that have enriched my life [and the lives of others], but for today, we’ll settle on the ones I’ve named above.

It’s perhaps Peter James’ literary work, and his presence that always comes to mind when the blanket of winter is upon me. One tradition that sprang from a generous lunch, many years ago, soon became a date, a fixture that I eagerly accept annually, inking it in thick red sharpie in my diary – The Peter James annual Christmas lunch. It’s hosted generously by his Publisher Pan Macmillan, his Agent the poet Isobel Dixon – and this year managed adroitly and with uncommon enthusiasm by Emily Souders of Riot Communications. 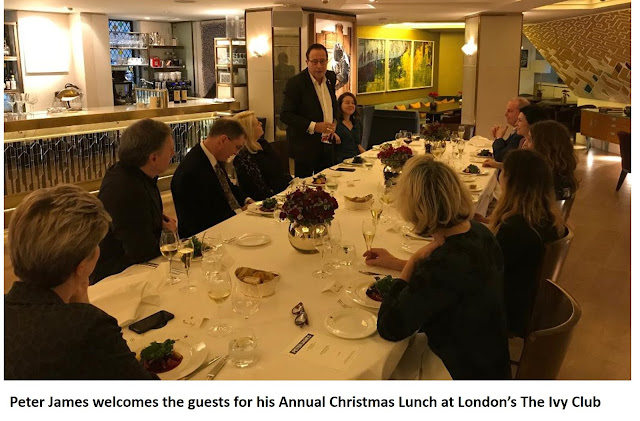 As the decade draws to a close, it is always excellent to break bread with fellow writers / literary commentators. This year’s event featured guests Karen Robinson [of the Times Crime Club], Deidre O’Brien [of The Mirror], Barry Forshaw [of the F.T.  DVD reviews, Fiesta, among many others], Laura Wilson [of the Guardian], Nic Clee [of Book Brunch] and the poet and the uber literary agent Isobel Dixon. There was a lot of laughter around the table, and afterward Mike Stotter and I carried on drinking Gin and Tonics until it was very late, exchanging anecdotes. I find the company of people who read books, especially crime, thriller and horror novels to be good for the mind and the soul. 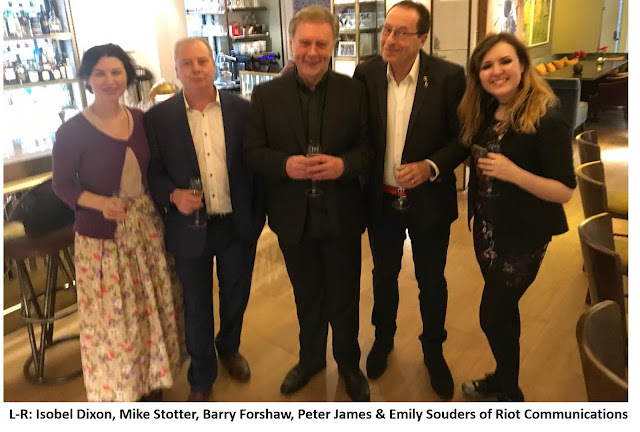 Everyone was delighted to hear that Literary bad-boy Mark Timlin has returned to print, but sad and melancholic that Marcel Berlins passed away this year. The reality of life and that of existence is a mystery; so any opportunity to share our time with people who are important to us, and to laugh deeply - must be embraced with uncommon alacrity.

But as ever, I digress.

It was back in 2006, that Peter was publishing his sophomore Roy Grace novel in hardcover LOOKING GOOD DEAD [with the first DEAD SIMPLE coming out in Paperback]. Peter knew that both Barry Forshaw and I were Horror Fiction readers / reviewers from way back. It should be remembered that prior to the Roy Grace police procedurals, Peter had penned thrillers and a series of horror novels that made critics pronounce him to be “…the British Stephen King…”. So joining Barry and I were Carla McKay, and Mark Timlin. The lunch was a splendid affair, where we laughed and we laughed, between a discussion about what books we’d enjoyed and in Mark Timlin’s case the need for more wine. I was curious about Peter’s 2nd book in this [now] bestselling Roy Grace series, as I could tell even then, these police procedural novels had legs.

Read about the inaugural Peter James Christmas Lunch, back in 2006 from Jeff Peirce’s THE RAP SHEET – Click Here to Dine with a Deadman 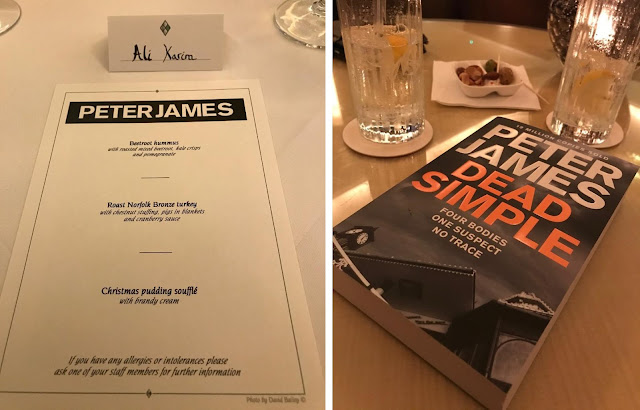 It was such a fun lunch, just before Christmas that Peter proclaimed that we should do this again. He is a man of his word, and so over the years ‘The Peter James Christmas lunch’ has become a bigger affair, where Peter generously invites colleagues to close the year with a wonderful literary event. It’s Peter [with his publishers] way of ending the year with comradery, and is done so with flourish and with good humour.

A decade ago, after the Christmas Lunch in 2009, Peter James kindly agreed to answering a lengthy series of questions from Mike Sotter and I. We often joke that it was…… the interview with no end…..it’s archived HERE, and acts as a primer for those few who are unfamiliar with Peter’s writing as well as his role as a Film Producer.

So, as we head back to the future - 2020 is set to be a signal-year for Peter James as well as the team he has assembled around him. Shots would like to share the news we gathered during lunch, with our readers -

The most exciting being, that DEAD SIMPLE [his first police procedural] is planned to start filming next year for ITV, with John Simm to play Roy Grace –

The Doctor Who star will take on the troubled Detective Superintendent Roy Grace in the series, which is based on the bestselling Roy Grace novels by Peter James.

The series will consist of two episodes and will cover the first two books, Dead Simple and Looking Good Dead, with filming due to begin in Brighton in early 2020.

Novelist Peter James said: “John Simm, who actually looks like the Roy Grace of my imagination, is inspired casting! With John in the lead, the brilliant scripting by Russell Lewis, and our wonderful production team, I’m confident that fans of my novels and of TV crime dramas in general will be in for a treat.”

John Simm is best known for playing The Master in Doctor Who and fellow time traveller Sam Tyler in Life on Mars, and was recently in ITV crime drama Strangers. 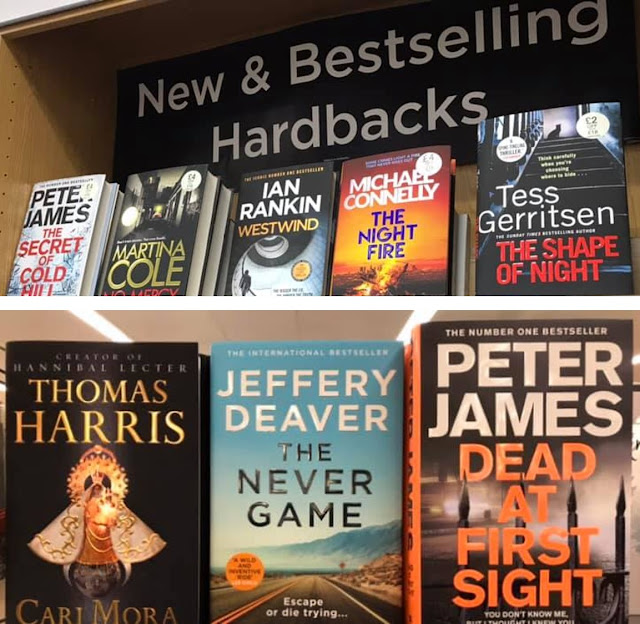 I remarked that it was an extraordinary achievement that the 2019 Roy Grace novel DEAD AT FIRST SIGHT beat Thomas Harris’ CARI MORA [his sixth novel], which was released on the same day. Peter James was Numero Uno again in the Nielsen Book Charts.

If it hasn’t happened in fiction most of us are aware of it in reality, if not personally. How many of us have been the target of desperate countrymen stranded in a foreign land who can be saved by the loan of a few pounds?

James elaborates that crude scam into a sophisticated scheme with neat variations and here incorporating an on-line dating agency. There is a nebulous network of organisations with operators extorting vast sums of cash from vulnerable people mainly in the USA and UK. The extortioners hail from Germany, Eastern Europe, West Africa – and Brighton, Sussex. 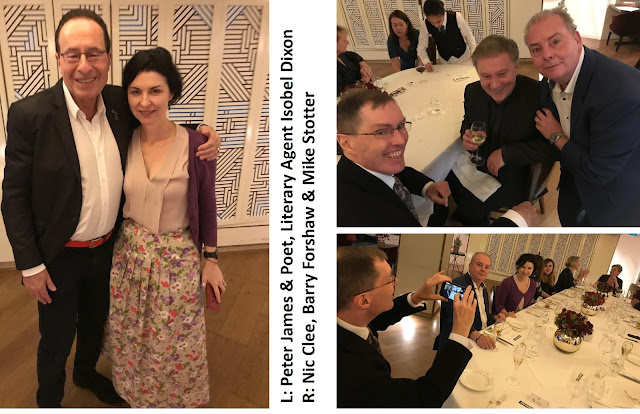 The mention of Cari Mora, by Thomas Harris got me excited again, though I appear one of the few critics who considered Harris’ sixth novel to be an audacious literary masterpiece. I do not fear being alone on this matter - this is why – CLICK HERE

We were also delighted to hear that one of my favourite novels, the techno-thriller PERFECT PEOPLE is optioned to come as a streaming-TV miniseries.

I wrote at the time -

As for the adaptation –

The event series is based on James’ book, which was published in 2011, and is a ripped-from-the-headlines thriller and family drama set in the world of genetically-engineered children who, as they hit puberty, are revealed to be not as “perfect” as their designers had intended. 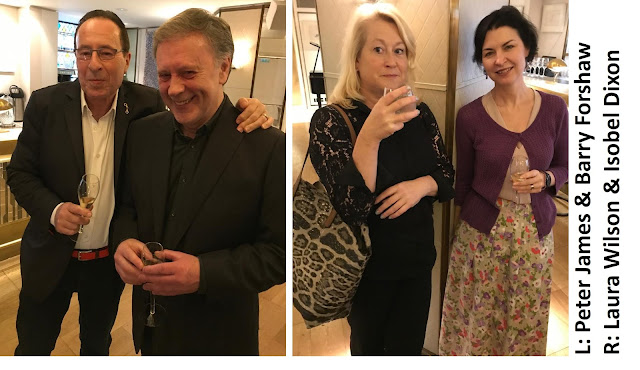 I remarked that considering the amount of work that Peter James has done over the years [including Chair of the Crime Writers Association for two consecutive terms] and being awarded the CWA Diamond Dagger 2016 for his contribution to the Crime and Thriller Genre, his presence at many international events, such as Capital Crime this summer – coupled to the subject that lies at the heart of his techno-thriller PERFECT PEOPLE, I believed that Peter had perfected cloning technology, and the Peter James who ate with us in London’s Ivy Club was not the actual author, but one of his many clones. Due to the excellent wine, it drew a few laughs [as we were indeed seeing doubles everywhere].

And I’d add it was perhaps one of his clones that worked with Hugh Bonneville on the Audible version of his extremely thought-provoking thriller ABSOLUTE TRUTH, click HERE for more information.

The new work is titled BABES IN THE WOOD

On 9 October 1986, nine-year-olds Nicola Fellows and Karen Hadaway went out to play on their Brighton estate. They would never return home; their bodies discovered the next day concealed in a small clearing in a local park. This devastating crime rocked their close-knit community and the whole country.

Following the investigation moment by moment, drawing on exclusive interviews with officers charged with catching the killer, former senior detective Graham Bartlett and bestselling author Peter James tell the compelling inside story of the murder hunt and the arrest of local man Russell Bishop. The trial that followed was one of the most infamous in the history of Brighton policing – a shock result sees Bishop walk free. ‘Not guilty.’

Three years later, Graham is working as a junior detective in Brighton CID. A seven year old girl is kidnapped and found wandering naked on the freezing South Downs. When Bishop’s name comes up as a suspect, it’s clear history had come close to repeating itself. With the law and science against them, the police are frustrated that, still, he would escape justice for the double murder. 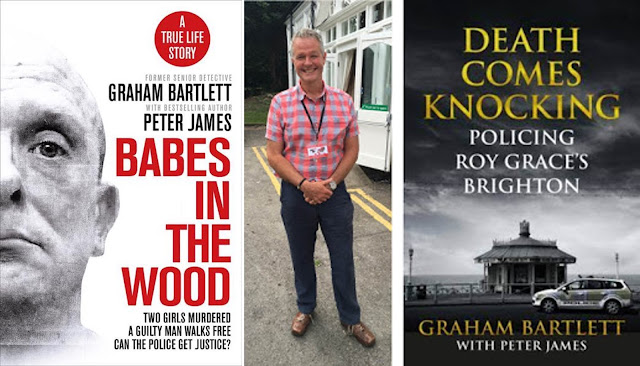 And I haven’t mentioned Peter’s theatrical work, or his recent Short Story Collection or even his Cold Hill Horror Books……

We all lead busy lives, so the Peter James’ Christmas Lunch was an excellent opportunity intersect with colleagues who have become friends with our shared enthusiasm for literature’s darkest avenue, Crime Mystery and Thriller – of which Peter James is one of the leading lights., due to his talent, but also his work ethic.

So, if you’ve not discovered the work of Peter James, or wish to keep up to date with his literary, audio or film / TV work, then Click HERE and to follow his Detective Roy Grace Click HERE 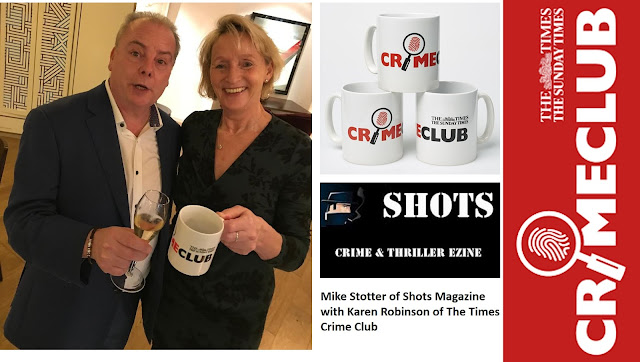 Mike Stotter and I would like to pass our thanks to Emily Souders of Riot Communications, Pan MacMillan, Blake Friedmann and the staff of London’s IVY Club for an excellent Christmas Lunch – though Roy was absent to say Grace…… 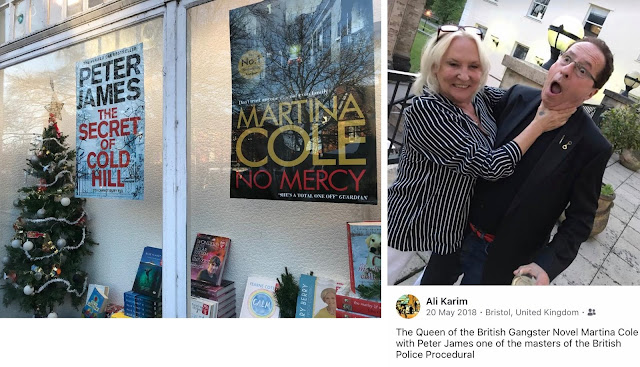 Shots Magazine would also like to wish all our readers, a very Merry Christmas and a Happy Hanukkah, and may 2020 be an excellent year for you all, and remember to pick up a book as Reading [aka Bibliotherapy] is important for the mind, and here’s why – CLICK HERE

“We don’t invent our natures...they’re issued to us along with our lungs and
Pancreas and everything else.” 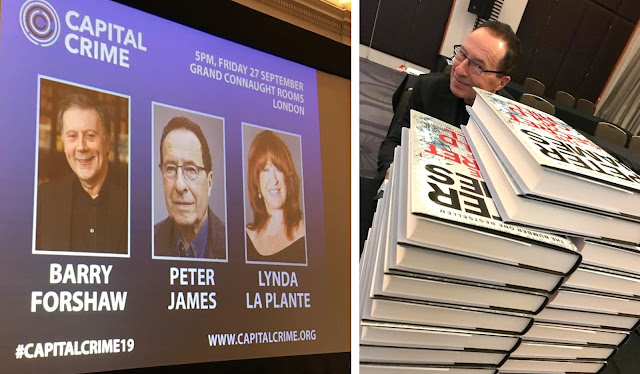