The Secret Language of Rogues and Gangsters by Amanda Lees 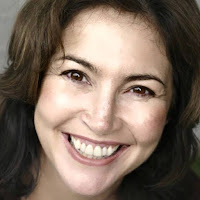 I love a good slang word. So do thieves, rogues and gang members, not least because having a secret argot, or language, is one way of keeping the authorities at bay.

Possibly my favourite part of writing my Crime Dictionary involved tracing slang words from their origins in the Thieves’ Cant of the 16th century until today.

Cant is a jargon belonging to and used by a particular group or sub-group. From the 16th to 19th centuries in England, thieves, hustlers and other marginal members of society had their own cant known as Thieves’ Cant, which they used to communicate without being rumbled by the authorities.

The Artful Dodger in Dickens’ Oliver Twist speaks almost entirely in cant, and Dickens helpfully included a thieves’ cant glossary at the back of the book. Thieves’ Cant was also known as Rogues' Cant, Thieves' Argot, Flash or Peddler’s French and existed across Europe in different forms.

It began to flourish in 16th Century England when there was less work available and, as a result, crime started to rise. The new burgeoning underclass of thieves and rogues met in public gathering places or ‘flash houses’ in order to share tips and information.

Much as people have an interest in true crime today to arm themselves with knowledge, so the general population became fascinated with this underclass and several thieves’ cant dictionaries were published as a result. Although many of the words in those dictionaries are now archaic or extinct, some filtered down the centuries, finding their way into our everyday vocabulary.

Think ‘referring to blood as ‘claret’ is the preserve of Cockney detectives and East End villains? Think again. Highwaymen and footpads were using it way back when, along with ‘canary bird,’ thieves’ cant for a prison inmate which has evolved into the modern phrase ‘doing bird,’ or serving time in prison. When you say ‘filch,’ meaning to steal or talk about a ‘fence’ handling stolen goods, you are again echoing your 16th century ancestors.

Of the archaic words and phrases we no longer use, my particular favourites include ‘buttock and file’ for a pickpocket, a ‘bulldog with six teeth,’ meaning a gun in Victorian slang, ‘dollymop’ to refer to a part-time sex worker or prostitute and the aforementioned ‘footpad’ to refer to a highwayman or thief who stole on foot from pedestrians.

Contemporary gang slang works on the same principle as thieves’ cant, acting as a form of ever evolving code that keeps the cops on their toes, if not scratching their heads. Drill music and its attendant culture has given rise to some particularly rich gang slang, including a ‘hand ting’ to refer to a pistol or hand gun, a ‘mop’ to mean a larger gun and the short and not too sweet ‘K’ meaning to kill or to signify at least one kill if added to the end of a name.

Naturally, that same gang slang finds its way into prisons both in the UK and the US where rival factions continue the bitter feuds they maintain on the outside. Once inside, every prisoner has to learn the prison code or slang that peppers life behind bars. So a warder or ‘screw’ becomes a ‘kanga,’ derived from Cockney rhyming slang, a ‘rub down’ or ‘spin’ happens when your cell is searched and if you are ‘ghosted’ it means you’ve been moved to another prison without warning rather than being dumped on social media.

In the US, gang slang is arguably even richer, with Mafiosi rivalling Hispanic and Jamaican street gangs for linguistic jewels. When a street gangster ‘serves’ you in the States it’s not with a nice side of fries but a swift and merciless beating. CC does not refer to the designer label Chanel but is a warning that there are cops on the corner while to ‘ride with’ a gang or other inmate in prison has nothing to do with jumping in a car and everything to do with providing favours in return for protection.

When a Mafiosi refers to a ‘G’ that’s a thousand dollars, or a grand, which is often ‘kicked up’ or passed up the chain of command to reach the fat cat capo dei capi. A Jamaican gang member yelling ‘fire’ is not an order but a warning that the cops are coming. While a ‘farmero’ might conjure up an image of a rustic type leaning on a pitchfork, in reality this is a member of a notorious Hispanic prison gang known as Nuestra Familia. The US also has its share of historical slang, including such charmers as moll buzzers, bum steers and cheap thieves. I put them all, and much more, in the dictionary.

For someone who relishes words as I do, writing this book was as much a romp through some of the finest to ever roll off a tongue as a deep dive into etymology. Of course, slang only makes up a small part of it but what an enjoyable part, with police acronyms, spy lingo and Danish swear words adding to the fun. As I casually speak of swindlers, corn or cooking the books, I know that there is a whole history and other meaning behind what I am saying. It is a constant delight and education, one that I carry on as I collect yet more words to add to future editions of the dictionary.

Aconite to the Zodiac Killer: The Dictionary of Crime by Amanda Lees (Published by Little, Brown) Out Now 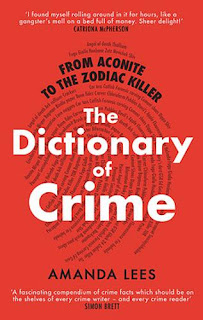 This is an indispensable guide for fans of true crime and crime fiction, whether in books, film or on TV, who want to look behind the crime, to understand the mechanics of an investigation, to walk in their favourite detectives' shoes and, most importantly, to solve the clues. To do that, one needs to be fluent in the language of the world of crime. We need to know what that world-weary DI is talking about when she refers to another MISPER. We have to immediately grasp the significance of the presence of paraquat, and precisely why it is still a poison of choice. If you want to know how many murders it takes for a killer to be defined as a serial killer, what Philip Marlowe means when he talks about being 'on a confidential lay' and why the 'fruit of a poisonous tree' is a legal term rather than something you should avoid on a country walk, this is the reference book you've been waiting for. It covers police and procedural terms and jargon of many different countries; acronyms; murder methods; criminal definitions, including different types of killers; infamous killers and famous detectives; notorious cases often referred to in crime fiction and true crime; gangster slang, including that of the Eastern European mafia; definitions of illegal drugs; weapons; forensic terminology; types of poisons; words and phrases used in major crime genres, including detective fiction, legal thrillers, courtroom dramas, hardboiled crime, Scandi and Tartan Noir, cosy crime and psychological thrillers; criminology terms; and the language of the courts and the legal systems of British, American, French, Nordic and other countries. From Aconite to the Zodiac Killer is an essential, go-to resource for readers and even for writers of crime fiction. More than simply a glossary, this is a guide that provides a doorway into a supergenre, and one that is not just for readers, but also for the many fans of film and TV dramas, of podcasts, and crime blogs. It is also an indispensable resource for writers or would-be writers of crime fiction.