Extract From Harm by Sólveig Pálsdóttir

‘No!’ she burst out, her hands going to her mouth. The terror that enveloped every fibre of her was so forceful that she could barely draw breath. She stared at the man in the bed, snatched at him and shook him.

‘You can’t do this to me!’ she howled, as she fought to draw long, gasping breaths. ‘Ríkharður, my love, you weren’t supposed to die.’

She let go of him, and rocked herself back and forth in confusion. Her breathing was shallow and she was close to losing control. She told herself to focus, to take deep, long breaths, to stay in control and not to give way to panic that would leave her helpless. She had to be able to think, to do what was needed.

What was she supposed to do? Call 112 and ask for an ambulance? Or a doctor? She looked in desperation at the man in the bed. There was no doubt that he was dead, and she was sure she had heard that if someone died at home, the police would always attend. Would a caravan count as well? She was certain of it. The police would come, there would be an autopsy and the drugs in Ríkharður’s bloodstream would be identified.
Everything would point to her, since he was a doctor and of course would know better than to take that mix of drugs. How could she explain that she hadn’t meant to kill him, but had simply wanted him to fall into a deep sleep while she went out during the night? Who was going to believe that? No, she’d been down that road before, telling the truth to authority. They wouldn’t believe her any more than they had believed her back then. Nobody would take any notice of a woman with a past like hers. No, society would ostracise her. Crazy Diljá would be behind bars, or else locked away in a psychiatric ward. That dreadful place! She trembled with horror at the thought, shivering as if she were standing naked on a glacier.

Being locked in was the worst thing she could imagine. Nothing could be worse. She would lose custody, and she might never get to see María Líf ever again. That couldn’t be allowed to happen. No, not again! He mind was a whirl of thoughts, none of which she could bear to follow to a conclusion. All she knew was that she had to get away from here as soon as possible – get away and give herself space to think logically. The clothes she had worn the night before were in the wardrobe and she hurried to pull them on. She wiped her face with a towel, picked up her sports bag and jammed a baseball cap on her head. She was being stifled here – she had to get away, far from this nightmare. 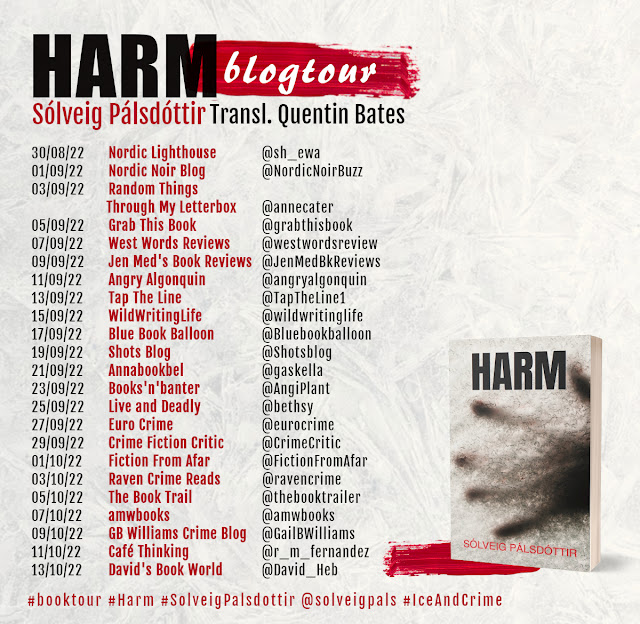 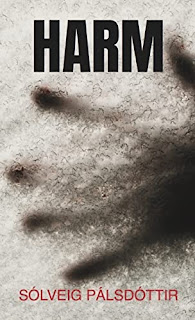 When wealthy doctor Ríkarður Magnússon goes to sleep in his luxurious caravan and doesn’t wake up, detectives Guðgeir Fransson and Elsa Guðrún are called to the Westman Islands to investigate what looks like murder. Suspicion immediately falls on Ríkharður’s young, beautiful and deeply troubled girlfriend – but there are no easy answers in this case as they are drawn into family feuds, disgruntled friends and colleagues, and the presence of a group of fitness-obsessed over-achievers with secrets of their own. As their investigation makes progress, Guðgeir and Elsa Guðrún are forced to confront their own preconceptions and prejudices as they uncover the sinister side of Ríkharður’s past. Harm is the third novel featuring the soft-spoken Reykjavík detective Guðgeir Fransson to appear in English. Sólveig Pálsdóttir again weaves a complex web of intrigue that plays out in the Westman Islands, remote southern Iceland and Reykjavík while asking some searching questions about things society accepts at face value – and others it is not prepared to tolerate.