Final Term is by Leigh Russell.When a pupil accuses a teacher of molesting her, his career and marriage are threatened... The girl's corpse is discovered in the woods, and the teacher becomes a suspect in a murder enquiry. The victim's best friend is then murdered so she cannot reveal the killer's identity. The investigating team are satisfied the teacher is guilty, apart from Detective Inspector Geraldine Steel, who believes the wrong man has been arrested. All of her colleagues disagree... but if she is right, the real killer remains at large.

Guns, Dames and Private Eyes: The Rivals of Philip Marlowe - Stories from the Golden Age of the American Pulp Magazines is edited by Nick Rennison. The prototypes of Raymond Chandler's immortal private detective Philip Marlowe first appeared in a magazine called Black Mask in the 1930s. Black Mask was not the only pulp magazine of the period to publish crime fiction. There were news stands full of them with titles like Dime Detective, Spicy Mystery Stories and Ten Detective Aces. And there were plenty of other private eyes in action. This was the era in which the hard-boiled American detective was born and Nick Rennison's anthology gathers an exciting selection of stories about the rivals of Philip Marlowe. From the intriguingly named Cellini Smith to the two-fisted female crime-solver Violet McDade, from the crime reporter Johnny Castle to the quick-witted, fast-shooting Marty Quade, these characters have their own style and originality. Authors like Norbert Davis, reputedly the favourite crime author of the philosopher Ludwig Wittgenstein, Cleve F. Adams and Robert Reeves may not have the reputations of Chandler or Dashiell Hammett, another famous name who began his career writing for the pulps, but they knew how to tell a thrilling story. They deserve to be remembered and admired, and this collection highlights more than a dozen of them.

Robert B Parker's Fallout is by Mike Lupica. When two seemingly unconnected mysterious deaths occur on his watch, police chief Jesse Stone must pull out all the stops to unravel the truth and stop a killer from striking again. The small town of Paradise is devastated when a star high-school baseball player is found dead at the bottom of a bluff just a day after winning the team's biggest game. For Jesse, the loss is doubly difficult - the teen was the nephew of his colleague, Suitcase Simpson, and Jesse had been coaching the young shortstop. As he searches for answers about how the boy died and why, he is stonewalled at every turn, and it seems that someone is determined to keep him from digging further. Jesse suddenly must divide his attention between two cases after the shocking murder of former Paradise police chief, Charlie Farrell. Before his death, Farrell had been looking into a series of scam calls that preyed upon the elderly. But how do these 'ghost calls' connect to his murder? When threats - and gunshots - appear on Jesse's own doorstep, the race to find answers is on. Both old and new enemies come into play, and in the end, Jesse and his team must discover the common factor between the two deaths in order to prevent a third.

Too many people loved Kelly Rowland. One of them killed her, but was it the man in prison for her murder? Gethin Grey is back in the game. His wife may have left him and he's struggling with life as a single father, but now he's got his biggest case in years. The brutal murder of a young woman called Kelly Rowland has been the talk of the South Wales valleys. Even the conviction of a neighbour, a builder called Morgan Hopkins, failed to stop the gossip. There were too many other suspects still around, among them a pair of coppers: brother and sister. So Gethin was delighted when Morgan's family stumped up the money to pay him and his Last Resort Legals team to reinvestigate the case. But when a new lead takes him undercover into a support group for recovering addicts, Gethin has to confront his own demons. Moving from the former mining towns of the valleys to the shiny new waterfront developments of Cardiff, taking in adult puppet shows and piercing parlors, derelict mines and country clubs, Grey In The Dark is by John Lincoln and lays bare a world in which sex and money collide and everyone has their secrets.

Viper's Dream is by Jake Lamar. A hard-boiled crime novel set in the jazz world of Harlem between 1936 and 1961, Viper's Dream combines elements of the epic Godfather films and the detective novels of Chester Himes to tell the story of one of the most respected and feared Black gangsters in America. At the centre of Viper's Dream is a turbulent love story. And the climax bears an element of Greek tragedy. For the better part of 20 years, Clyde 'The Viper' Morton has been in love with Yolanda 'Yo-Yo' DeVray, a singer of immense talent but a woman consumed by demons. By turns ambitious and self-destructive, conniving and naive, Yo-Yo is a classic femme fatale. She is a bright star in a constellation of compelling characters including the chauffeur-turned-gangster Peewee Robinson, the Jewish kingpin Abraham 'Mr. O' Orlinsky, the heroin dealer West Indian Charlie, the corrupt cop Red Carney, the wife-beating singer Pretty Paul Baxter, the pimp Buttercup Jones and the brutal enforcer Randall Country Johnson. But Viper's Dream has a fast-paced vibe all its own, a story charged with suspense, intrigue and plot twists and spiced with violence and humour. It is also steeped in music. The Viper's story is intertwined with the history of jazz over a quarter century. 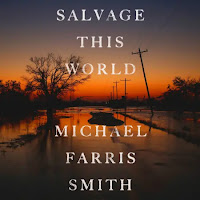 Salvage this World is by Michael Farris Smith. There was no rising from the dead and there was no hand to calm the storms and there was no peace in no valley. In the hurricane-ravaged bottomlands of South Mississippi, where stores are closing and jobs are few, a fierce zealot has gained a foothold, capitalizing on the vulnerability of a dwindling population and a burning need for hope. As she preaches and promises salvation from the light of the pulpit, in the shadows she sows the seeds of violence. Elsewhere, Jessie and her toddler, Jace, are on the run across the Mississippi/Louisiana line, in a resentful return to her childhood home and her desolate father. Holt, Jace's father, is missing and hunted by a brutish crowd, and an old man witnesses the wrong thing in the depths of night. In only a matter of days, all of their lives will collide, and be altered, in the maelstrom of the changing world.

As a favour to her partner, Geraldine agrees to look into the disappearance of a young woman, only to discover that several other young women have also gone missing locally. They all vanished unexpectedly, without trace. When one of the missing women is discovered, unconscious and covered in mud, she dies without recovering consciousness, leaving Geraldine and her team in an urgent race to find the other missing women before it is too late to save them. Without Trace is by Leigh Russell.

Master storyteller and award-winning author Chris Offutt’s latest book, Code of the Hills, is a dark, witty, and propulsive thriller of murder and secrets in a town where little is as it seems. Mick Hardin is back in the hills of Kentucky. He’d planned to touch down briefly before heading to France, marking the end to his twenty-year Army career. In Rocksalt, his sister Linda the sheriff is investigating the murder of Pete Lowe, a sought-after mechanic at the local racetrack. After another body is found, Linda and her deputy Johnny Boy Tolliver wonder if the two murders are related. Linda steps into harm’s way just as a third body turns up and Mick ends up being deputised again, uncovering evidence of illegal cockfighting, and trying to connect all the crimes.

Never Walk Away is by Nick Triplow. DS Mark (Max)Lomax is a former Demonstration Squad Officer – a Special Branch Unit dedicated to inflitrating political and extremist groups, a world he thinks he has left far behind. Following a botched stakeout of a north London gangster, he finds himself on enforced leave and is called back into his old world of half-truths and conflicting agendas. As he digs into the death of the civil servant, Max is obstructed at evry turn, forcing him to turn to the people he once infiltrated an betrayed for help. With political reputations on the line, the case becomes less about uncovering the truth, then burying it for good.

Charlie Walden is the Resident Judge of the Bermondsey Crown Court, where he had hoped for a quiet life, but has found it to be anything but. With the job of balancing the needs of prosecutors, judges, 'Grey Smoothies' – the humourless grey-suited civil servants – and the overall needs of a Crown Court, he soon finds himself struggling to keep the peace with his own delightful humour. In this first full length Walden novel Charlie is faced with a number of topical issues he hadn't anticipated; invited to join the Court of Appeal he finds hmself faced with a case involving the 'confusion' of one of his team; in another, a Trans teacher must be penalised for defacing a statue; a huge and mysterious cat comes to the rescue in yet another case, and so the harrassed Judge must pick his way through this minefield of exasperating casesin order to keep eveyone from the cannabis lobby to the anti-slave traders happy with his judgments. No hope of that quiet life for Charlie then but as ever he picks his way through the issues of the day with satirical good humour, insight and wit in another entertaining look at the British Court system. A Week on Mount Olympus and Other Tales From the Bench is by Peter Walden.