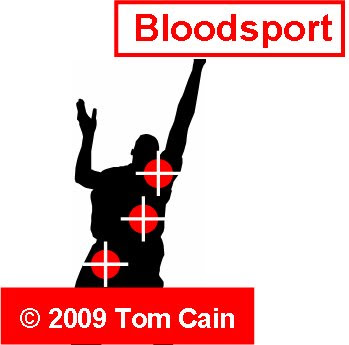 “The green crosshairs of the sniper scope moved downwards, past the open collar of the Prime Minister’s shirt to a point directly between the lapels of his jacket, smack in the middle of his chest …"

Thriller writer Tom Cain has already plunged his hero Samuel Carver into real-life events and controversies torn from newspaper front pages. His acclaimed debut novel The Accident Man, which was translated into some 25 languages and optioned by Paramount Studios found Carver standing by the Alma Tunnel in Paris, just after midnight on 31 August 1997, preparing to take out a black Mercedes limousine. Its sequels, The Survivor and Assassin have woven actual reports of missing Soviet nukes, FBI investigations into fundamentalist Christianity and the appalling truths of sex-slave trafficking into compelling fiction. Now comes Cain’s most audacious concept: Bloodsport. In this exclusive, internet-only short story, Samuel Carver – outraged by the needless death of an old friend in Afghanistan – will set out to take revenge on the man he holds responsible: the British Prime Minister. Cain has been planning the fictional mission for the last two weeks, with fans following his progress via facebook updates and Twitter feeds. In a 21st century spin on the 19th century tradition of serial fiction, Bloodsport will be published online in three instalments over three consecutive days, with the first appearing on Monday, 3 August in the top US crime-fiction blog The Rap Sheet

‘This story has ruffled feathers in this country,’ says Cain. ‘So I thought it best to publish abroad. I need hardly say, of course, that it’s a fictional story, pure and simple. I am absolutely not advocating violence against politicians, or anyone else in the real world. Bloodsport will play by the same rules as The Accident Man. That book described the fictional murder of an unnamed princess. Now Carver will be stalking a fictional, unnamed Prime Minister.’

So where did the idea for Bloodsport come from? Cain says, ‘I think we’ve all been shocked and saddened by the recent deaths in Afghanistan and the government’s alleged failure to equip and protect British troops. But how must it feel if you know the men being killed in action? I just asked myself how an angry, ex-serviceman, with the knowledge and the skills to take matters into his own hands, and the belief that he is acting in the greater good, might react under these circumstances. And I had a character in Samuel Carver who fitted the bill.’

Cain insists, however, that readers should not make too many assumptions too soon: ‘I am in the business of writing thrillers. That means that stories twist and endings are uncertain. People reading this may feel sure they know what is going to happen. But in fiction, as in life, nothing ever works out quite the way one expects …’