A Mulligan for The American Girl with the Dragon Tattoo 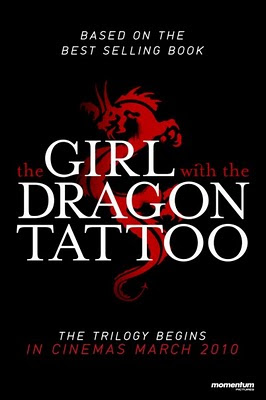 Despite the brilliance of Noomi Rapace in the original Swedish Film version of Stieg Larsson’s THE GIRL WITH THE DRAGON TATTOO, it seems that Producer Scott Rudin and Director David Fincher have cast British actress Carey Mulligan as Lisabeth Salander in the US remake, reports The Sunday Times this morning –

FOR Carey Mulligan, who sprang to fame last year in the hit British film, An Education, Hollywood has come knocking. She is set to play Lisbeth Salander, punk heroine of the bestselling thriller The Girl With the Dragon Tattoo.
Mulligan has won the approval of David Fincher, the director, and also the family of the late Stieg Larsson, the Swedish author who created Salander. The choice follows weeks of casting rumours, with producers sifting through nearly 5,000 potential candidates.
Hollywood insiders say Mulligan can expect to be paid up to £10m for the three films covering Larsson’s Millennium trilogy, which has sold 1m copies in Britain and 25m worldwide. This will make her one of Britain’s best-paid actresses.
Mulligan has made no secret of her desire to play Salander, a fierce “biker chick” computer hacker who helps an out-of-luck journalist investigate a long-missing woman in The Girl With the Dragon Tattoo, the first book in the trilogy.
“I am obsessed with those books,” she said last month. “I would love to do them. I am not going to lie about that. I would love to play Lisbeth Salander.”
Since then Scott Rudin, the Hollywood producer who shared an Oscar with the Coen brothers for No Country for Old Men in 2008 and been nominated for 13 other Oscars, has won over the family of Larsson, who died in 2004. They had been wary about the prospect of a Hollywood film.
“They now understand what kind of film he is making and they like Carey,” said an industry source last week.
The Girl With the Dragon Tattoo has already been filmed in Swedish under its original title, Men Who Hate Women, with Noomi Rapace, a stage actress, playing the bisexual Salander. It was popular in Scandinavia but its subtitles have prevented it becoming a mainstream hit in America, where it opened last month.
The new version may be relocated to Canada as a compromise for American audiences. It will not reach cinemas until all three books have been turned into Swedish-language films by the team behind the television hit Wallander.
The final decision on casting will be made soon by Fincher, director of Fight Club, Se7en and The Curious Case of Benjamin Button. He has been talking to Mulligan’s representatives at Creative Artists Agency in Los Angeles, which has been seeking a “breakout” role for their young British client.
Read More from The Sunday Times Here