Crime in the Court at Goldsboro Books!

So what do you call a gathering of a large group of crime writers, fans and bloggers?  In my opinion a fantastic affair!

Also in attendance were a number of editors, publishers and literary agents including Lucy Ramsay and Jane Wood from Quercus, Sam Eades and Ben Willis from Headline, Jamie –Lee Nardone from Duckworth, Broo Doherty, Catherine Burke and Thalia Proctor from Little, Brown, Nic Cheetham and Becky Sharpe from Head of Zeus and bloggers including Chris Simmons from Crimesquad and Mike Stotter Editor of Shots and Mike Ripley.  I am sure that I have forgotten a number of people so my apologies.

Despite the fact that it threatened to rain heavily on a number of occasions David Headley and Goldsboro Books were lucky and all we had to deal with was the odd drizzle of rain that was not enough to send people rushing into the shop to avoid it. 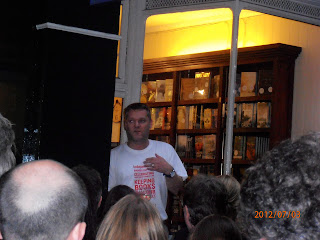 This is the second year of Crime in the Court and it has become one of the best-run crime fiction events and a staple on any discerning crime fiction writer, blogger or fans list of events that has to be attended.   It is not often that you get an opportunity to hang out with so many people in such a wonderful atmosphere without a lot of speeches.

There was only one speech and that was from David Headley and it was very much welcomed.  He took the opportunity to not only thank everyone for attending but to also thank people for their continued support of independent bookshops.

One must say a big thank you to David for putting on such a wonderful event and also thanks to Daniel and Pavla as well.

I do hope that next year there will be another Crime in the Court as there are many of us that will be looking forward to it again with gusto!
Posted by Ayo Onatade at 23:08