Karin Slaughter - an interview with Will Trent 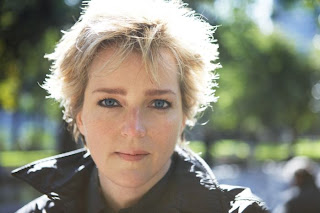 Karin Slaughter is an internationally bestselling author of several novels, including the Grant County series.  She is also a long-time resident of Atlanta.  Her most recent book is Criminal and is the fourth book in the Georgia series featuring Will Trent of the Georgia Bureau of Investigation, Dr Sara Linton and Amanda Wagner.  The Georgia series combines characters from her Grant County series with that of her Atlanta series characters.

In an exclusive for Shotsmag Confidential and in conjunction with the publication of Criminal Karin kindly agreed to be briefly interviewed by Will Trent and answer some of those pressing questions that we would all like to know the answer to.

KS:      You seem to be doing well despite that!  Being able to read fluently is such a natural thing, especially for people who read books, so I wanted to give you something that made you feel like an outsider.  Also, your dyslexia is something you hide from other people, which gives you insight into the criminals you speak with who are, after all, hiding something.  I'd also like to point out that you are capable of reading, just not quickly.  You fill out all your paperwork for your boss, too.  It takes you a longer time than it does Faith, but you've proven over the years that you can do just about anything you set your mind to.
WT:    And what’s the deal with Atlanta?  Couldn’t you have sent me to a state with a lower crime rate so I’m not always rushed off my feet.
KS:      How boring would that be?  I suppose I could've plopped you into some sleepy small town, but as we learned from Grant County, even small towns have bad things happen.  Basically, if you're the subject of a crime novel, you know it's never going to be easy.  At least you have great sex!
WT:    I’m all for equality but what’s with all the ball-breaking women in my life?

KS:      I wouldn't say they are all ball-breaking, nor would you, I imagine.  In fact, I think you love that you're surrounding by women, because that's how you grew up.  Amanda can be hard, but Criminal tells us a lot about why.  Faith's worst sin is her nosiness and I can't imagine anyone who's easier on you than Sara (for a bit, anyway).  Now, if you mean Angie: yeah, she's kind of bad, but you're the one who puts up with her.  You could always change the locks.
WT:    So, who am I based on?  Or am I so special that I’m a one-off?

KS:      I think you're pretty special, but I am sure there are other dyslexic law enforcement officers out there (there's actually been lawsuits filed by some who were discovered and had to sue to keep their jobs).
WT:    And what’s in store for me next – a holiday in the Caribbean?  A guy can hope…

KS:      You get a short vacation to Florida in between Criminal and the next book (which I am currently writing).  Fortunately, you didn't get too sunburned, but Amanda has a way of letting the people who work for her know that she doesn't like when they take vacations... 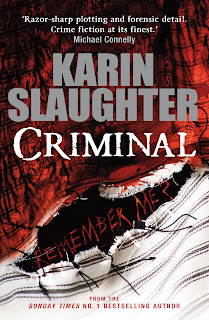 ******
1975: In the blistering heat of an Atlanta summer, a killer prowls the street, searching for the weak, the vulnerable and the lost.  Almost 40 years later, a young woman is found brutally murdered in a sordid high-rise apartment.  The specifics of her death are detailed and macabre, but for Special Agent Will Trent they are startlingly familiar, and can only mean one thing.  Desperate to deny this might be happening to him, he is forced to return to the home he grew up in, to the grimy crime-ridden streets, to a childhood he has spent the best part of his adult life trying to avoid.  As the tension on the inner-city streets starts to simmer, Will becomes convinced that the clue to the killings now, and in 1975, may lie in his own past; a past that he hates yet feels responsible for.  And that the killer is much, much closer to him than anyone thought possible.

Criminal by Karin Slaughter is published by Century in hardback, £18.99.

Will is so real, love the interview!
Dorothy

Great interview! I love Will Trent I can't get enough of reading about him and the women in his life that make him miserable and happy all at the same time.

It took me a while after the Grant County series to get used to Will Trent, in fact I was really annoyed about him being a main character. With so many pages shared with Jeffrey Tolliver it was like changing a colour for a b&w TV, but now I've read the series, I can't have enough of him!.

Just the other way around for me: Tolliver was an ass, but I'd love to share breakfast with a man like Will Trent... ;-)

I can't believe Will isn't a real person, lol. I love him. After reading Criminal I still don't understand why Amanda is so harsh with him. I would assume she'd be very loving and kind to him. I read Unseen too. I love the books that have Sara and Will dating.

Why are you so hard on dingos? Thank you.