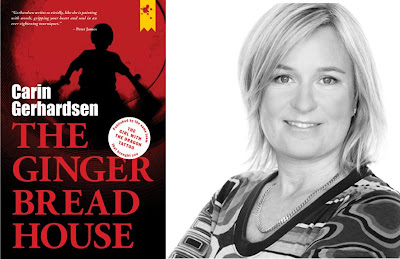 At Shots eZine we are always on the look out for books that provide sleep deprivation, books that keep you reading way past you bedtime, and books that make you “think”. One of our early finds was this little book.

Carin Gerhardsen’s The Gingerbread House, is one such book. She has become Sweden’s number one bestselling crime fiction writer, having sold over 500,000 copies of her books internationally and published in over 20 countries. The Gingerbread House is currently being filmed by Yellowbird Productions, the producer of the Millennium Trilogy films. She worked as a mathematician before she became a writer. Carin suffered many of the vicious bullying incidents herself as a child and found that these experiences never truly left her.  Carin is now well-known for her taut, calculated thrillers and the second novel in the Hammarby series will be published in 2013.

So what’s so special about The Gingerbread House?

The Gingerbread House is a dark, suspenseful, psychological crime novel that challenges the reader’s instincts throughout. In the opening chapter we uncomfortably witness a vicious attack on a 6-year-old child at a picturesque urban preschool, near Stockholm, where adults look the other way. And so it begins…

Some years later as night begins to fall, a man sits down on the underground train with a newspaper in his hand, content. He is successful, happily married, a father of three beautiful children and has every reason to be cheerful. However, in the window reflection he catches a glimpse of a dishevelled-looking character – a man that seems to be staring at him. This momentarily unnerves him, but then thinks nothing of it as he leaves the train to head home, unaware that the shady character observing him also alighted.

Not long afterwards, criminal investigator Conny Sjöberg and the Hammarby police are bought in to investigate a series of violent and seemingly unrelated murders that all occur in south of Sweden.  The team begin to think these crimes are connected, while Sjöberg chillingly realises that the killer’s motives are very personal and won’t let anything stand in their way.

The Gingerbread House raises questions where the answers might be hard to determine; can you ever truly escape the effects of traumatic childhood and do these experiences define your character irrevocably?

Carin kindly agreed to talk to Shots Ezine
How did the film of your book come about?
Quite a good story from what I’ve heard. The receptionist at Yellowbird Productions had read my crime series and loved it. Then she persuaded one of the producers at the production company to read my books. Which she did, and she enjoyed them, she called my agent and then bought the first six parts of the series. …
How closely will it stay to the book version?
At the moment I don’t know; the production company is still working on the script. I will be involved in the end, but not before that.
Your biography in the book mentions that you were a victim of childhood bullying, how bad did it get? What was the worst incident you encountered?

The first scene in The Gingerbread House is my own experience. I was six years old, and on my way home from preschool the other children tied me to a light pole with jump ropes and scarves. I was sitting on the wet, cold asphalt while the kids threw rocks at me, banged my head against the light pole and whipped me with their jump ropes. This was physical abuse, easier to see, easier to talk about and to prevent. I still think that the psychological harassment is a lot worse. The long-lasting kind of abuse that gives you a feeling of not being wanted and not being worthy of love, that breaks you down on a deeper level. Having said that I want to emphasize that I overcame any despair. But then again; that’s me. In this novel I explore how different people react differently in times of misfortune, how bad childhood experiences could form a human being.

‘The Gingerbread House’ includes some of these incidents, why did you include them?

I guess I wanted to put them to paper. Letting people know what goes on among children. And obviously it’s easier to create a credible and vivid scene if you’ve actually been there yourself.

Do you think childhood bullying should be spoken about more?

It’s everyone’s duty to be informed about what’s going on in the world around us, to try to understand people and what they are going through. In order to create functioning adults we should all be involved in creating a functioning everyday life for the children around us. Even the odd ones. Even the ones that are not our own. So yes; enlightening is always a first step to understanding and involvement.

Did you speak to anyone else about their childhood bullying when writing this book?

No, I didn’t. But the bullying scenes in the novel that aren’t my own I wrote from memories of stories I’d heard other people tell, or abuse I’d been watching from distance. All the harassment in the book is real, experienced by me or people in my surroundings.

Your books have become hugely popular, did you ever anticipate this?

The hard bit is to get the books published at all. I never doubted that they would become a success if they were published; there is a lot of hard work behind my novels. But naturally I am very happy about the success. An old dream I’ve harboured since I was a child has been fulfilled. But I blame myself that I didn’t take action before. If I hadn’t been so lazy I could have done it twenty-five years earlier…

Read the Shots Review here and buy the book from the Shots Book Store here
Posted by Ali Karim at 14:57