A Mann for all Genres

During the Crimefest weekend, Titan Publishing were hard at work getting their promotional Popcorn Machine working to launch Stephen King’s JOYLAND, which is from their imprint, Charles Ardai’s Hard Case Crime. 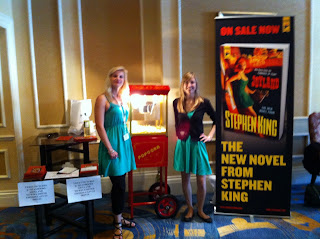 Set in a small-town amusement park in 1973, Joyland tells the story of the summer in which college student Devin Jones comes to work as a carny and confronts the legacy of a vicious murder, the fate of a dying child, and the ways both will change his life forever. "I love crime, I love mysteries, and I love ghosts. That combo made Hard Case Crime the perfect venue for this book, which is one of my favorites. I also loved the paperbacks I grew up with as a kid, and for that reason, we're going to hold off on e-publishing this one for the time being. Joyland will be coming out in paperback, and folks who want to read it will have to buy the actual book." Stephen King


Joyland is a coming-of-age tale that will make you reflect upon your own life as well as question our past. With not long to wait until release so here’s the first review from The Washington Post

Anyway, during the Crimefest weekend we bumped into one of their interesting writers – George Mann. I asked Titan’s Sophie Calder to let me know more about Mann’s work, and we’re delighted to present it here, and a natural read while waiting for Joyland's release -

From the writer of The Ghost series of novels and audio scripts for the BBC’s Doctor Who and Sherlock Holmes, comes the fourth instalment of George Mann’s popular Newbury & Hobbes series of steampunk mysteries, The Executioner’s Heart [Titan Books, July 2013, Original Paperback]. 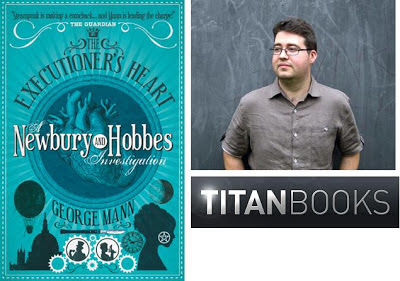 The Executioner’s Heart is the latest adventure of Sir Maurice Newbury, gentleman investigator for the Crown, and his feisty assistant Miss Veronica Hobbes!
A serial killer is loose on the streets of , murdering apparently random members of the gentry with violent abandon.

The corpses are each found with their chest cavities cracked open and their hearts removed. It is clear some new and strange contraption is being used to affect this procedure. Charles Bainbridge, Chief Inspector of Scotland Yard, suspects an occult significance to the crimes and brings Newbury and Veronica in to investigate

Praise for the Newbury & Hobbes Series:

“Mann is at the forefront of the new generation of genre movers and shakers.”
—SF Revue

“The Affinity Bridge is an enormously entertaining ride through an alternate early-twentieth-century London, a depiction of a world that stands on the cusp of great change even while being mired in the societal norms of yesteryear (not unlike our own world), and an absorbing, suspenseful mystery that makes liberal use of all sorts of good, geeky fun, while featuring distinctive, complex heroes for whom it is a pleasure to root.”
—Rob Will Review

“The pacing of The Osiris Ritual is fluid and engaging as Mann moves nimbly among storylines. He paints his characters in vivid, unforgettable strokes, especially the more ominous ones.”— Times

“The Osiris Ritual is a heart-pounding, adrenaline-inducing combination of the steampunk and detective genres, the twisted but ultra-cool result of a literary genetic experiment gone wild… George Mann is a worthy successor to Sir Arthur Conan Doyle, and fans of steampunk and page-turning thrillers should check out both this and The Affinity Bridge.”—BoomTron

“Newbury and Hobbes have a refreshing chemistry. The multiple mysteries and complex storylines were intriguing. And the suspense was thrilling, making it impossible to put down. This is one steampunk I highly recommend.”—Sci Fi Chick

“Occult detective work, freaky bad guys who are damn unsporting and a burgeoning love story make this a steampunk mystery you should add to your reading list.”—SF Crowsnest

George Mann is the author of the Newbury and Hobbes and The Ghost series of novels, as well as numerous short stories, novellas and audiobooks. He has written fiction and audio scripts for the BBC’s Doctor Who and Sherlock Holmes. He is also a respected anthologist and has edited The Solaris Book of New Science Fiction, The Solaris Book of New Fantasy, and Titan Books’ Encounters of Sherlock Holmes. He lives near .