Miss Marple and the Folio Society 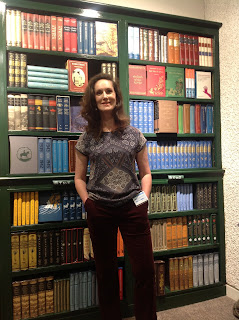 Yesterday 11 June they hosted at the Folio Society an evening for bloggers.  In attendance was Laura Thompson who gave a brief talk about Agatha Christie and her life.  Amongst some of the things that she spoke about was the fact that Agatha Christie had no interest in murder.  She did not like violence nor was she interested in grief or loss. She was however interested in the workings of the genre and had a conceptual attitude to the whole notion of murder. She set the template for murder but was also radical. Christie did not feel the need to create a perfect detective. She was aware of other detectives such as Campion, Wimsey, Wexford etc.  but did not want to expound on character.  She was also interested in real life murders such as the Charles Bravo case and the Croydon Poisonings.

Laura Thompson also thought that despite the fact some think that she was not particularly good at characterisation, she felt that she would not have lasted so long if she were not good. She also felt that her best book was Five Little Pigs and that her worse one was The Clocks. According to Laura Thompson, P D James said that there was a lot more to Agatha Christie  than was apparent.  She was very worldly, tough and realistic.  The character of Miss Marple took a lot from her two grandmothers.  Agatha Christie herself was a very complex and contradictory woman.  She was also very cosmopolitan.  In real life she would have hated St Mary Mead. 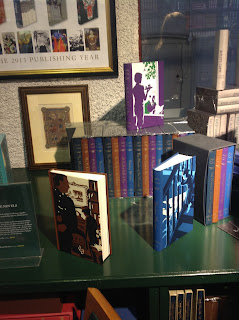 for doing so was because she felt that Christie was undervalued and that she decided that it could not and cannot be the case. She also stated that it was in her writing as Mary Westmacott that she was the most revealing about her life. They also got better reviews than her crime novels.  They were extremely sprawling and she was unhappy when the Sunday Times revealed that she was the author. She only wrote one further book under the name Westmacott after being revealed.  Her only daughter took second place to Max Mallowan when she married him. She was to a certain extent sidelined by her mother.

Laura Thompson was asked which of Christie's novels were her favourite and she stated that it was Five Little Pigs.  Miss Marple is her favourite character.   The first Agatha Christie novel that she read was Murder on the Links.

The novel N or M was considered to be too anti-German in the United States and there was also a furore over The Mirror Crack'd from Side to Side.  It was thought that it was based on a true life case.

According to Laura Thompson she had a good sense of her own worth and whilst she was greatful for the number of fans that she had, she did not want to have too much engagement with them. It was her novel Witness for the Prosecution that turned her into a major author. 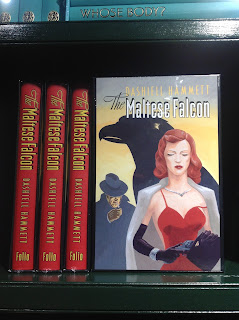 After the talk there was further opportunity to talk to Laura Thompson and the people at the Folio Society.  The Folio Society is certainly well worth visiting.  The bookshop is full of wonderfully illustrated books and they have a pretty good crime and mystery fiction section as well.  I have my eye on an illustrated copy of The Maltese Falcon!

My previous blog post on the Miss Marple Collection can be found here.
Posted by Ayo Onatade at 20:32

I'm so glad my search for Agatha Christie Folio Society editions led me to your blog. Great to hear about the event and some details about Laura Thompson's talk. I really hope I can make it to the Folio bookshop someday soon. They produce such beautiful editions, and it would be an extra joy to attend some events with fellow bloggers and authors. Best, -Jason (Spy Vibe)