The UK cover reveal for debut author Dan Newman whose book The Clearing is due to be published by Exhibit A Books.

The Clearing is Dan Newman’s debut novel; a dark and atmospheric psychological thriller. Full of intrigue, terror and superstition, The Clearing examines our deepest fears of the unknown.

To celebrate publication on 29 Oct (US/ebook) and 5 Nov (UK/ROW) Exhibit A Books have 5 advance reader copies to offer Shots readers, with this international cover reveal. To win your copy of The Clearing, send your full name and address to Shots Competition and five names will be pulled from the hat after the closing date on 21 September 2013.

Dan Newman was born in England, grew up on St Lucia in the Caribbean – where The Clearing is set – then in the Kingdoms of Lesotho and Swaziland in Southern Africa, then Canada, then England again, then Australia, and then…you get the picture. Dan has had a variety of jobs including playing semi-professional football in Africa and working as a plant pot cleaner, and a beer brewer. Now living in Toronto, Canada, he’s settled on corporate communications but uses his degree in journalism to write terrifying thrillers, alongside his blog and website, and can oft be found chatting on Twitter. 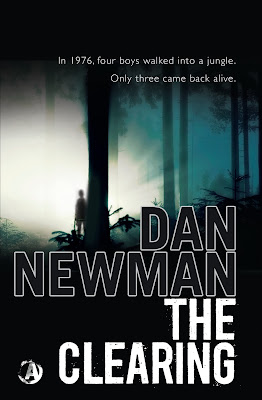 In 1976, four boys walked into a jungle. Only three came back alive.

Haunted by terrifying childhood memories he doesn’t fully understand, journalist Nate Mason returns to the Caribbean island of St. Lucia where he grew up.
Back then, as the son of a diplomat, he was part of an elite social circle. But during a weekend of whispered secrets and dares in a decaying jungle mansion staffed by the descendants of slaves, Nate’s innocence was torn apart.
The survivors of that gathering blamed what happened on a myth, an unseen terror from the bush. No one believed them. But now. almost forty years later, is the truth finally about to come out?
Within hours of arriving back on the island, Nate becomes convinced he’s being followed. He soon discovers that his search for answers could cost him his sanity as well as his life, as he realises that some childhood nightmares never go away.
Can childhood nightmares haunt you for the rest of your life? How much do you need to believe in a monster for it to become real? The Clearing is a dark and atmospheric psychological thriller, full of intrigue, terror and superstition, which examines our deepest fears of the unknown. A potent mix of the friendship and bravery of Stand By Me and the betrayals and fear of Angel Heart.