Bentley Motors is best known for creating very high end automobiles and being somewhat of a status symbol on the road. The one thing they have never done is published a book, but that is all going to change. Bentley and Vintage have teamed up to capitalize on the 60 year anniversary of James Bond – Casino Royale and have released a limited edition print run that will run you $1200.00. Only 500 copies have been made and of course the 1933 Bentley was Bond's car of choice.
The book has been created by designers Kris Potter and Stephen Parker at Random House, who were inspired following a trip to the Bentley Motors HQ in Crewe. They comment: ‘We knew that any design we came up with would have to reflect the incredible craftsmanship and heritage we had seen in the Bentley cars at Crewe, the challenge for us was how we could combine this with the coolness and nostalgia of Bond… The inspiration was endless.’ The metal spine is inspired by Bentley’s steel tread plate, and it is illustrated by Damian Gascoigne.
Published on 13 April 1953 by Jonathan Cape, Casino Royale introduced James Bond to the world. The first print run of 4,728 copies sold out within a month. Following this initial success, Fleming went on to publish a Bond title every year until his death in 1964. It is in Casino Royale where 007 first utters the immortal line ‘Bond – James Bond’. The special edition Casino Royale will be available from 1st November, with orders taken through a dedicated phone line to international customers, excluding those in the US or Phillipines – 01206 255666.
hat tip:Good eReader 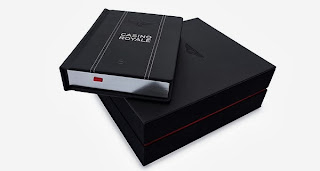