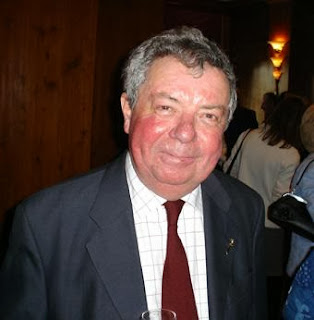 Crime writer and 2003 Diamond Dagger recipient ROBERT BARNARD has died, aged 76, after several months in a nursing home in Leeds. Shots columnist Mike Ripley, who first met Bob Barnard twenty-five years ago, reminisces about one of the stalwarts of English crime fiction.

Robert Barnard was one of a quartet of writers born in 1936 – his contemporaries being Reginald Hill, Jonathan Gash and Peter Lovesey – who formed a solid backbone for traditional English crime writing of the highest order in the last quarter of the twentieth century.

Unlike others of his generation, Robert Barnard’s zestful and witty novels did not benefit from television adaptations, nor indeed from large paperback runs in the UK. His books were often more easily available in America where he was probably better known as an exponent of the ‘cosy’ school of crime writing – a label he never denied or disparaged as he felt the main goal of a crime writer was simply ‘to entertain’. In this he tried to emulate Agatha Christie, for whom he had a great admiration, describing her as the writer “who has probably given more sheer pleasure than any other in this century” in his critical study A Talent To Deceive in 1980. He was no doubt proud of the fact that his first editor at the legendary Collins Crime Club was Elizabeth Walter, who was also Agatha Christie’s last editor and Robert was the obvious choice to give the oration at Elizabeth’s funeral in 2006.

One reason often given as to why Bob Barnard was not the household name he should have been, was that he never had a central series hero, whereas Hill had Dalziel and Pascoe, Gash had Lovejoy and Lovesey (initially) had Sergeant Cribb, all characters which attracted the interest of television producers. In fact, Barnard had several series heroes – among them policemen Perry Trethowan (perhaps the most successful), Idwal Meredith and Charlie Peace and, under the pen name Bernard Bastable, even Wolfgang Amadeus Mozart! – but his series were never produced in concentrated bursts, Barnard preferring to employ a character when a plot or a central theme required it.

His early career was in academia. After reading English at Oxford and a brief stint working for the Fabian Society, he left England in 1961 for a lectureship at the University of New England in Armidale, New South Wales. In Australia he acquired a wife, Louise (they were married for fifty years), and the inspiration for his first crime novel Death of an Old Goat, which was published by Collins in 1974. A move to Norway, first as a lecturer at the University of Bergen and then as Professor (of English Literature) at Tromso, similarly supplied the background for his 1980 novel Death in a Cold Climate.

He returned to England in 1984, choosing to live in Leeds – he once said that after years in Norway, he found the local Leeds accent easier to understand than that of his native Essex! – becoming an active member of the Crime Writers Association and particularly its Northern Chapter. It was felt by many members that he was the ‘best Chairman the CWA never had’ and he was later to throw his energies into The Bronte Society, as vice-chairman then chairman, based around the famous parsonage at Haworth in Yorkshire. His devotion to the Bronte legend resulted in the illustrated biography Emily Bronte for The British Library in 2000 and A Bronte Encyclopedia, written with his wife Louise and published this year, as well as two crime novels: The Missing Bronte (1983) and the wonderfully titled The Corpse at the Haworth Tandoori (1998).

In all, Robert Barnard produced over 40 crime novels and dozens of short stories (I even featured, rather unflatteringly, in one and we both contributed to the Crime Club’s Diamond Jubilee anthology A Suit of Diamonds) as well as respected critical works on Dickens and Agatha Christie. He was a popular speaker at conventions and conferences, especially at Malice Domestic in the USA (where he was Guest of Honour in 1998). On his return from one trip to North America, he presented me with a paperback crime novel bought on a whim at the airport.  He had, he told me, read it on the plane and found it ‘boisterous, rather crude and right up your street’. The book, then unpublished in the UK, was a Canadian paperback original of Frost At Christmas by R. D. (Rodney) Wingfield, and for that introduction as well as the pleasure provided by his own books, I am eternally grateful to Bob.

Whilst his crime writing was firmly of the traditional British detective story school (he himself often described his books as ‘deliberately old-fashioned’), his novels all contained a sharp streak of social satire, the result being on occasion hysterically funny. His targets included the Church, television soap operas, the class system, academic rivalries and politics and his aim was never more true than in Posthumous Papers (1979), Sheer Torture (1981) and Political Suicide (1986), a book still treasured by political journalists and lobbyists.

Not all his books came off, as he was usually the first to admit. I once saw him stun an audience of fellow crime writers into silence by saying he had, for a particular publisher, ‘written three good books, one so-so one and one bad one’. When I approached him in 2011 about the possibility of reissuing some of his early novels, whilst happy with the idea in principle, he had specific reservations, saying: ‘I don’t for example, think reprinting a slightly fusty title like A Little Local Murder is a good idea.’ I know of few (if any) crime writers who could be as dismissive of their own work as Robert could be when he felt a book hadn’t quite come together; though in the case of A Little Local Murder, I think he was wrong.

I met Bob in 1988 at what was my first meeting of the Crime Writers Association in The Groucho Club, where he as a member of ‘The Committee’ was acting as a meeter-and-greeter to welcome new members. To my surprise, and secret pride, he had read my debut novel Just Another Angel (I suspect our mutual editor Elizabeth Walter had sent him one) and had some frighteningly detailed questions for me which I doubt I answered to his satisfaction as I was somewhat in awe of him, having been a fan of his books for the previous decade.

I don’t think I disgraced myself, though, as we ended up going out to dinner in an Italian restaurant afterwards and I discovered that where I was a native Yorkshireman (born not far from Leeds) who had moved to live in Essex, Robert was an Essex boy who had ended up living in Yorkshire. In fact, he had been brought up in the small fishing port of Brightlingsea whereas I then lived in neighbouring Wivenhoe, just along the River Colne.

When he returned to Essex to visit his mother, I would collect him from Colchester station and provide a taxi service to Brightlingsea, as he did not drive; something which became a bit of a running joke between us, Bob taking a perverse pride in his ignorance of all things motoring and car related. He was slightly (only slightly) chastened by his appearance on the television quiz Mastermind. His ‘specialist subject’ round (on Mozart I think) went well enough, but when it came to the general knowledge section he was totally stumped by the very first question: “When applied to a car, what do the initials GT stand for?”

In 2006 Robert won the CWA Short Story Dagger with his story Sins of Scarlet which was published in the CWA anthology ID: Crimes of Identity.
Posted by Ayo Onatade at 16:10

Nice piece, Mike - about a very nice man. Like everyone who knew him, I'm really sad and sorry to hear of his death.

Let us commence a journey into the much travelled topic of ripley nursing home. I really, really like ripley nursing home. Indispensable to homosapians today, several of todays most brilliant minds seem incapable of recognising its increasing relevance to understanding future generations.