Books to Look forward to from Head of Zeus

The Mulberry Bush is by Charles McCarry and is due to be published in November 2015. A young spy seeks to avenge his father's lonely death by punishing those responsible within the CIA. He's a recruiter's dream: a doctorate in Islamic studies from a prestigious University, fluent in Arabic, Farsi, Hebrew and Pashto, single, discreet and ambitious. His father was a spy so he understands the rules. Don't ask questions, don't get impatient, learn to live with uncertainty. But he's not as perfect as he seems. When his father died, penniless and friendless on the streets of Washington, he decided to seek out those who'd turned their backs. A spy with no name can seek vengeance with ease; he's a shadow, a phantom, a spook. But can he bring down the CIA? 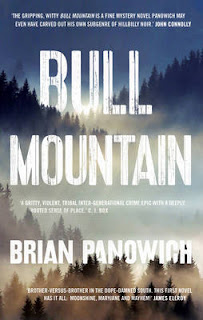 Clayton Burroughs is the Sheriff of Bull Mountain and the black sheep of the brutal and blood-steeped Burroughs clan. In the forties and fifties, the family ran moonshine over six state lines. In the sixties and seventies, they farmed the largest above-ground marijuana crop on the East Coast, and now they are the dominant suppliers of methamphetamine in the Southern states. An uneasy pact exists between the law man and his folk, but when a federal agent with the Bureau of Alcohol, Tobacco and Firearms shows up in Clayton's office with a plan to shut down Bull Mountain, his agenda will pit brother against brother, test loyalties, and set Clayton on a path to self-destruction. At its heart, Bull Mountain is a story about family, and the lengths men will go to protect it, honour it, or, in some cases, destroy it.  Bull Mountain is by Brian Panowich and is due to be published in July 2015.

Katie Maguire hunts a serial killer targeting nuns in the gruesome new thriller from Graham Masterton. In a nursing home on the outskirts of Cork, an elderly nun lies dead. She has been suffocated. It looks like a mercy-killing - until another sister from the same convent is found viciously murdered, floating in the Glashaboy river. The nuns were good women, doing God's work. Why would anyone want to kill them? But then a child's skull is unearthed in the garden of the nuns' convent, and DS Katie Maguire discovers a fifty year old secret that just might lead her to the killer...if the killer doesn't find her first.  Blood Sisters is due to be published in October 2015. 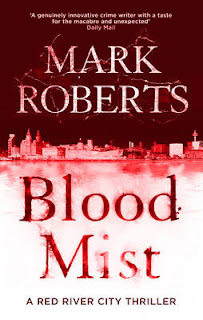 Blood Mist is by Mark Roberts and is due to be published in August 2015.  Every Night a family dies every day she tries to save them.  DCI Eve Clay got the call at five minutes to midnight. A family of six, slaughtered in their beds, their bodies dragged out to the landing to form an arcane pattern. Outside, a blizzard rages past the well-kept houses of The Serpentine. None of the neighbours heard a sound. Someone took great care to arrange those bodies so precisely. But who? And why? Somewhere in Eve's minds, a long-buried memory flickers. But there is no time for hunches. She must find the killers before they strike again. As Liverpool holds its breath, DCI Eve Clay hunts a ruthless killer who knows more about her past than she does...

The beautiful game just got deadly. Scott Manson needs to leave London. His job managing London City football team is over, and it cuts deep to watch them play on without him. But changing your life isn't as simple as all that. When Scott takes up a new position in Shanghai, he gets caught up in an elaborate sting mounted by a rival team. And when he quits that for a job in Barcelona, it turns out his new employers only want him for his detective skills: their star player is missing, and they need to find him fast. As Scott tracks the player from Paris to Antigua, he uncovers corruption, kidnapping - and murder...  False Nine is by Philip Kerr and is due to be published in November 2015. 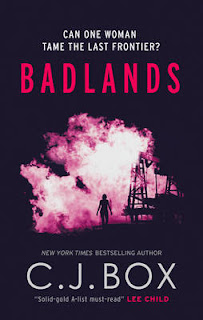 Badlands is by CJ Box and is due to be published in July 2015.  Grimstad, North Dakota. A place people used to be from - but were never headed to - has struck oil. As pipelines snake across the prairie, oil flows out and men and money flow in. And with them, comes crime. North Dakota's new oil capital has a serious law and order problem and newly qualified detective Cassie Dewell has just been appointed its deputy sheriff. Twelve-year-old Kyle Westergaard is one of Grimstad's paperboys. Kyle has been written off as the 'slow' kid, but he has dreams deeper than anyone can imagine - he wants to get out of town, take care of his alcoholic mother, and give them a better life. While delivering newspapers, he witnesses a car accident and now has money and a lot of white powder in his possession. With the temperature dropping to 30 degrees below and a gang war heating up, Cassie fears she might be in over her head. The key to it all will come in the most unlikely form: an undersized boy on a bike who keeps showing up where he doesn't belong.

Sherlock is edited by Otto Penzler and is due to be published in September 2015.  In 1887, Arthur Conan Doyle put pen to paper and created a legend: Sherlock Holmes. The greatest detective of all time. His tall, slender, hawk-nosed figure with his deerstalker hat is instantly recognisable in every corner of the world. Alongside Doyle's original stories, Sherlock has spawned a literature of his own in parodies and homages. More than 25,000 books, stories and articles have been written by authors, amateurs and scholars. In this stupendous anthology, the best and most brilliant are collected together for the first time. Contributors include: Arthur Conan Doyle, James M. Barrie, O. Henry, Stephen King, Kingsley Amis, A.A. Milne, P.G. Wodehouse, Neil Gaiman, Anthony Burgess, Colin Dexter and Anne Perry.

The Will to Live is by Philip Hunter and is due to be published in November 2015.  To Joe injured and broken, it seems that the whole of East London is at war.  But until he recovers from the knife wound that nearly killed him, he can’t join the fight.  He is running out of time to track down the men that killed the only woman he ever loved.  But revenge is what drives him. Either they die, or he does.  There’s only one way to find out. ….. 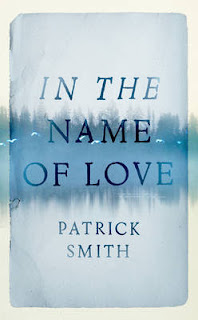 A young woman is brutally murdered on an island near Stockholm - a haunt of wealthy retirees and arty weekenders. Suspicion falls first on a family of Iraqi refugees, initially welcomed into the community but gradually feared and shunned. But then, as the victim's story unfolds, suspicion begins inexorably to fall elsewhere. Lena Sundman was rude, dysfunctional, and very young. Everything a fastidious man like Dan Byrne disliked. Taking refuge on the island after the sudden death of his wife, Dan finds himself strangely drawn to the troubled girl, starting from the moment he reluctantly rescues her in the teeth of a gathering snowstorm.  In The Name of Love is by Patrick Smith and is due to be published in August 2015.

A second instalment in a trilogy of rare power and narrative scope that unlocks the dark heart of Spain, weaving past and present together to portray a country still scarred by civil war, still riven by fear and hatred, still plagued by secrets that refuse to die. 1954: Comandante Guzman has been posted deep into the Basque country to confront a man known only as 'El Lobo'. Guzman was last here in the war though he would rather forget that. But he hasn't been forgotten, and high in the mountains, he must fight for his life, against someone who has been searching for him for a very long time...2010, Madrid: On the eve of an election, the government commission Forensic Investigator Ana Maria Galindez to investigate the scandal of the 'Ninos Robados' the thousands of children stolen at birth during the years of the dictatorship. The politicians hope her findings will pacify public outrage at the thefts, but there are many who would prefer those secrets to remain hidden. And if that means silencing Galindez, they will.  The Exile is by Mark Oldfield and is due to be published in September 2015.

Spider’s Web is the fourth book in the Steel City series by Ben Cheetham and is due to be published in November 2015.  February 14th 1993. Sheffield United supporters remember it as the day their team won a famous victory against Manchester United. The date is lodged in Anna Young's brain for a different reason. That was the day her thirteen-year-old sister, Jessica, was abducted...Fast forward twenty years. The case has long since gone cold. But Anna won't let it die. She made a promise to look after her little sister. And it's a promise she intends to keep no matter how long it takes...A detective with one thing on his mind. Jim Monahan is equally determined to bring down a sadistic sex-ring. But everywhere he turns he finds himself entangled in a web of political power and silence. Then comes a bizarre twenty-year-old clue that might just blow the whole thing apart... 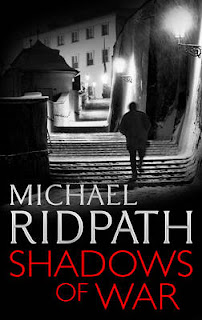 Shadows of War is by Michael Ridpath and is due to be published in July 2015.  October, 1939: War has been declared, but until the armies massed on either side of the French/German border engage, all is quiet on the Western Front. But just because its quiet doesn't mean that it's not deadly. There are those who believe the war no one wants to fight should be brought to a swift conclusion, even if it means treachery. A year ago, Conrad de Lancey came within seconds of assassinating Hitler. Now the British Secret Service want him to go back into Europe and make contact with a group of German officers they believe are plotting a coup. But this is the Shadow War. And the shadows are multiplying. And it’s not only disaffected Germans who are prepared to betray their country to save it...

Chechnya: an incorruptible security officer is assassinated. Berlin: a small child grieves for his father. In the East: an obese psychopath sets his feet on the first rungs of his criminal career. A frightened Russian woman seeks DCI Hanlon's help in finding her missing husband. Hanlon's not keen on the case. Until she hears a name she recognises only too well. Arkady Belanov, sadistic pimp and owner of an exclusive brothel in Oxford is involved. When DI Enver Demirel, her former partner and friend, disappears, Hanlon is forced into an uneasy alliance with the London underworld to rescue him from the blood-stained hands of the Russian mafia.  A Hard Woman to Kill is by Alex Howard and is due to be published in September 2015.

Father Aloysius Walsh spent the last years of his life painstakingly collecting evidence of murder, mass murder - a year-long killing spree of unparalleled savagery that blighted Ireland's borderlands at the end of the 1970s. Pinned to his bedroom wall, a macabre map charts the grim territory of death: victims, weapons, wounds, dates - and somehow, amid the forest of pins and notes, he had discerned a pattern...So why did the priest deliberately drive through a cordon of policemen and off the road to his death? Why, when Inspector Celcius Daly arrives at the scene, does he find Special Branch already there? And why is his mother's name on the Priest's map? The past poisons the present and Daly's life will never be the same again.  Silence is by Anthony J Quinn and is due to be published in November 2015.