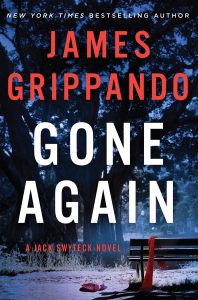 “Jack Swyteck is a lawyer’s lawyer,” Nolan said. “He works within the system, relentlessly searching for the truth as he races against time to defend a death row inmate.”

Noble agreed. “If I am ever in legal trouble, there is no lawyer I would rather have than Grippando’s Jack Swyteck,” he said. “The man is dedicated to social justice, resourceful and tireless.”

Grippando will be honoured with a signed special edition of “To Kill a Mockingbird” and an article in the ABA Journal.

“Grippando’s book does a masterful, entertaining job exploring the important topic of the death penalty and actual innocence,” said Molly McDonough, editor and publisher of the ABA Journal. “In ‘Gone Again,’ attorney Jack Swyteck focuses on finding the truth while navigating the complexities of habeas petitions for a despicable client.”

The 2017 prize will be awarded at The University of Alabama School of Law on Sept. 14. After the award presentation, the Selection Committee will convene a panel discussion of Grippando’s “Gone Again” in relationship to Lee’s “To Kill a Mockingbird.”
Posted by Ayo Onatade at 03:00