So far this year we have had the launch of Mike Ripley’s excellent book Kiss, Kiss, Bang, Bang a reflection upon the Golden Age of the British Thriller. And now with the new Le Carré novel due out in September Waterstones is having its own mini spy season. 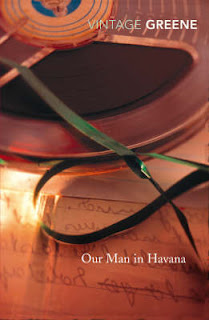 As part of its Summer of Spies a series of events have been planned by Waterstones Gower Street with the first event taking place on 4th July when they will be discussing Graham Greene’s Our Man in Havana, published in 1958. Capturing the daiquiris and decadence of pre-Castro Cuba, this blackly comic tells the tale of MI6's man in Havana, Wormold, a former vacuum-cleaner salesman turned reluctant secret agent out of economic necessity. To keep his job, he files bogus reports based on Lamb's Tales from Shakespeare and dreams up military installations from vacuum-cleaner designs. Then his stories start coming disturbingly true.


A full list of the events can be found below.