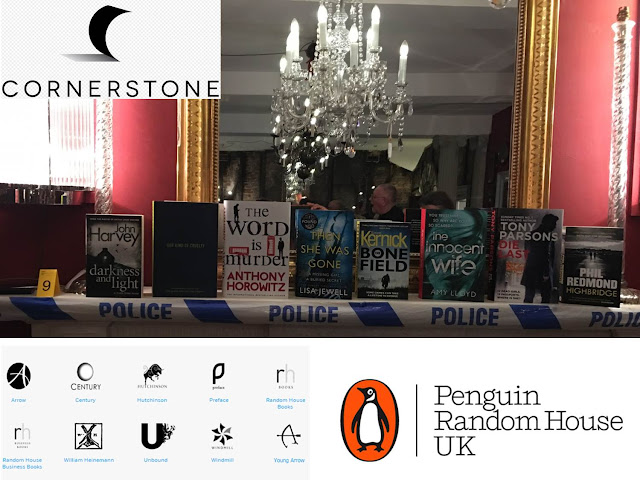 Muriel Karim, Ayo Onatade and I were delighted to receive invitations from Francesca Russell and Selina Walker to attend the very first Cornerstone Crime & Thriller Party. Cornerstone maybe a new name in the genre to some, but many of us have come to know this eclectic imprint from Penguin-RandomHouse. 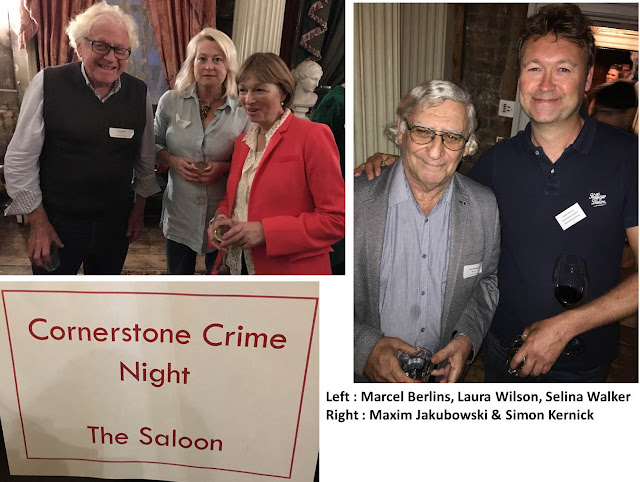 We’ve known Selina for some time, as she is a renowned publisher and Ayo, Mike Stotter and I enjoyed her company over Bouchercon 2016, in New Orleans; while Francesca is one of the renowned PR Directors in Publishing. Francesca was one of the team behind the PR for Penguin’s Michael Joseph Imprint which specialises in Crime and Mystery as well. 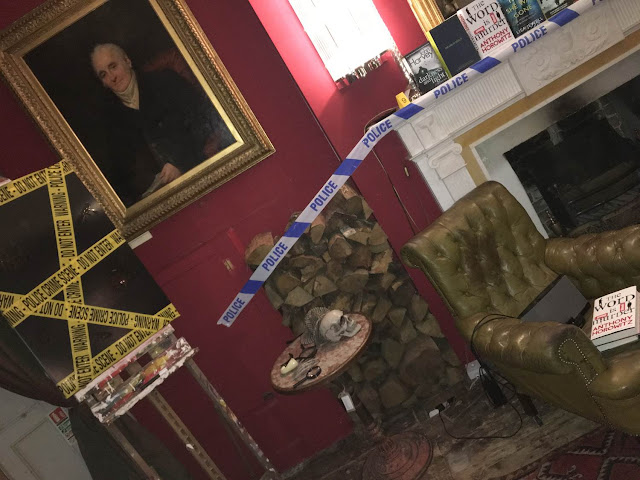 The Cornerstone Party was remarkable, hosted in London to give Crime-Fiction Critics, Literary Commentators an opportunity to meet some of their Authors, Editorial and Public Relations / Promotional Teams – with an array of canapes, wine and eclectic conversation.
We took away their 2017 Catalogue, from which we paste the introduction from Selina Walker to give you an indication of what narratives are coming from this interesting imprint of Penguin-Randomhouse. 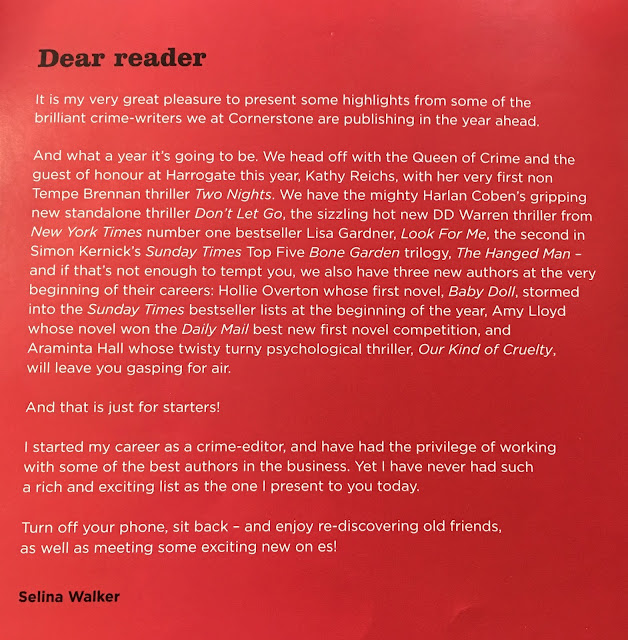 The guest list was equally eclectic, with Rony Cambell, Barry Forshaw, Nick Clee, Laura Wilson, Jake Kerridge, Mike Linane and many many others. 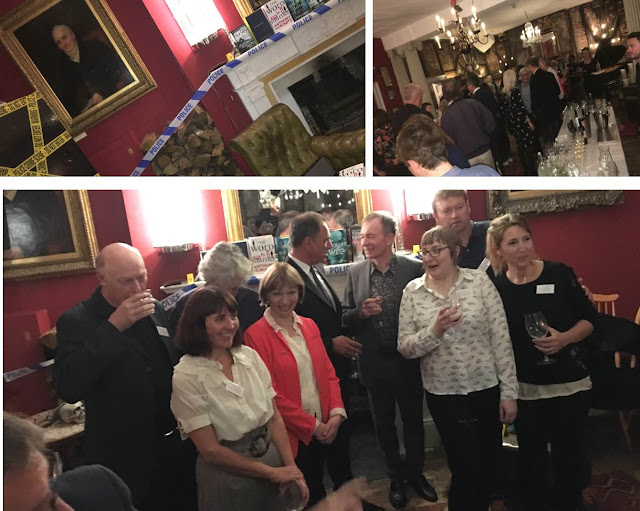 It was good to see writers Simon Kernick, John Harvey, Tony Parsons among the newer talents such as Lisa Jewel, Amy Lloyd among many others. 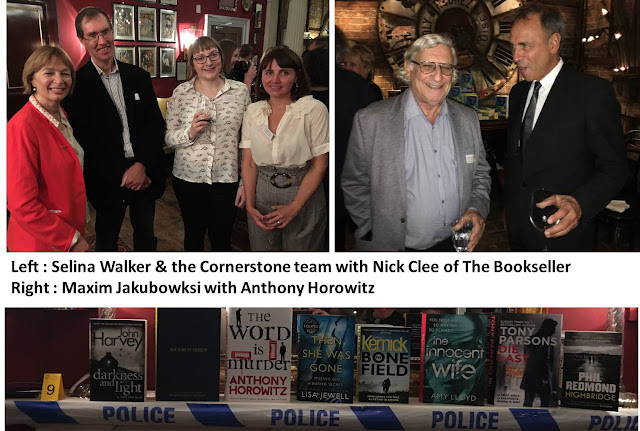 I particularly enjoyed having a lengthy chat with Anthony Horowitz. I thanked him for enthusing our three Children (now Adults) into reading due the thrill they got with literature; with no small thanks to his Alex Ryder novels.

I also chatted about his latest work, the curious and very elegant THE WORD IS MURDER, as well as his excellent after dinner speech at this year's Crimefest Convention held in Bristol entitled The Curious Murder of Felix Francis. 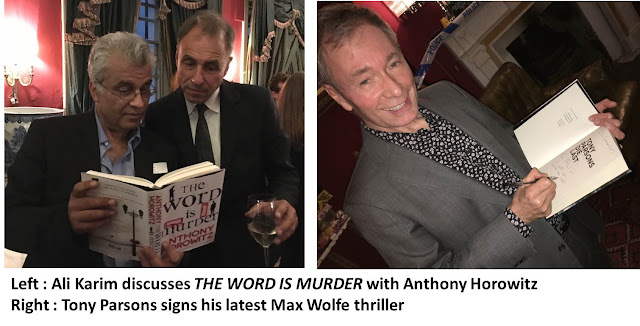 I remarked just how extraordinary his delivery in comedic terms was. Horowitz replied 'Ali, we writers are solitary souls and not usually adept at stand-up comedy'.

Though witnessing his high-wire act at the Crimefest Gala Dinner, I said he was too modest, as the five minute murder mystery he delivered was extraordinary, and he smiled. 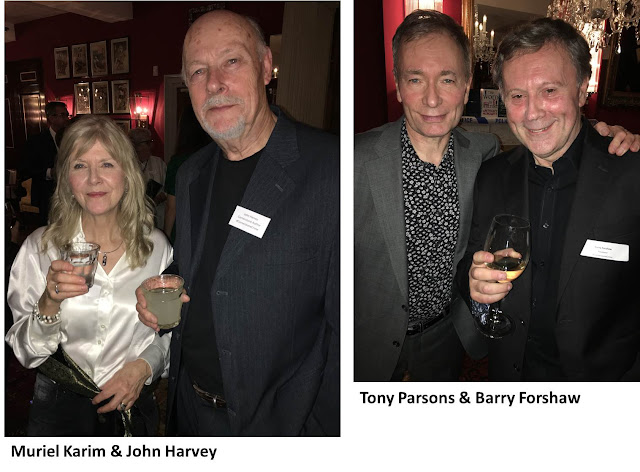 I also thanked him for allowing me to upload and share the clip via The Shots Blog as I had found myself sitting on an adjacent table (with Peter Rozovsky) and can be viewed below and is an extremely witty five minute murder mystery; and quintessentially British.

It was soon time for Selina to take the Microphone to welcome the guests and introduce the Cornerstone Authors assembled as well as mention those not present in person, but represented by their works which were on display, such as Hollie Overton, Harlan Coben, Alison Gaylin and Lisa Gardner.

So after much mingling, Muriel, Ayo and I said our farewells and thanked Francesca, Selina and their team at Cornerstone for their hospitality. We were still recovering from the late reveling at Martina Cole’s launch party for Damaged - held the previous night, and which spilled into today, hence we needed some sleep – so we headed into the London Evening.