When is a Series not a Series

There was Never Going to Be a Second Book

When my Lakes-set crime thriller, DANCING ON THE GRAVE came out in late 2018, it was fully intended as a standalone novel. In fact, I stated as much in the sub-title of the book.

I’m not quite sure who I was trying to convince.

That story is my take on the Washington Sniper incident from back in 2002, but transported to the English Lake District. I focused the story around four of the main characters—rookie CSI Grace McColl; recently transferred Detective Constable Nick Weston; the sniper himself; and the disturbed teenage girl who becomes his spotter.

Unlike my first-person POV Charlie Fox series, DANCING ON THE GRAVE was written in close third-person viewpoint, so I could get right inside the heads of the characters—including the perpetrators. That made it feel, to me as I wrote it, unlike the usual police procedural. The story allowed me to explore a number of themes that were important to me, about the abandonment of former military personnel after their service was up, and what seems to be the current obsession with ‘being famous’ without regard to reason.

But I didn’t think it would be an easy book to follow up, even if I’d been intending to. Reviewers and readers had other ideas.

Such was the response to Grace and Nick that I was eventually persuaded to give them a second outing. (Although, strictly speaking, Grace’s first appearance was in a short story, Tell Me, which you can currently read on the Crime Readers’ Association website.)

The basic idea for BONES IN THE RIVER has been with me in some form or another for more than fifteen years. Back in the early 2000s, I was living in the small market town of Appleby-in-Westmorland in Cumbria, while building a house in the Eden valley. Every year in the first week in June, Appleby Horse Fair takes place in the town. It’s been held in one form or another since medieval times, but since the beginning of the last century it’s grown into the largest gathering of Gypsies and Travellers in Europe.

Held from Thursday to the following Wednesday (but mainly Friday to Sunday) the Fair attracts around 10,000 members of the Travelling community—quadrupling the population of the town. Another 30,000 visitors flock in to watch the spectacle of horses being washed in the River Eden and shown off along the Flashing Lane.

Locally, it’s greeted with mixed feelings. There are those who love it for the extra business and revenue it generates. And equally those who hate it for the disruption it causes. Not just during Fair week, but also in the run-up to the event, as the different Romany clans begin to assemble in outlying villages.

It is, I was told, a very good time to settle old scores. If one of your neighbours has pissed you off, you wait until the Fair to get your own back, and blame it on the Gypsies. The police are always out in number and trouble is, shall we say, not unknown.

So I set my story against this backdrop. It was somehow a metaphor for what was going on in the country at large over Brexit, where outsiders were viewed with suspicion and distrust. My aim was to portray without romanticising or demonising either. People are people, and there are good and bad of all types.

I also wanted to look closely at the effects of a split-second bad decision on someone who has spent their life on the ‘right’ side of the law. To see the slow, corrosive consequences as they are forced to compound their sins.

And, having discovered the title BONES IN THE RIVER as part of a song by Gillian Welch, I knew I was going to have to make the River Eden as much a character in the book as the people.

Once again, you see one crime as it’s committed and I make no effort to hide the identity of the perpetrator for long. But then a second body emerges, and there’s more mystery to the who and why.

If people react as well to BONES as they did to DANCING, then it’s a style I hope to repeat. I’ve already promised a third instalment with Grace and Nick. After that, it’s up to my readers. If they like what they see (including the Force Medical Examiner, one Dr Ayo Onatade) then there will be more crimes to come in the wild hills of Cumbria! 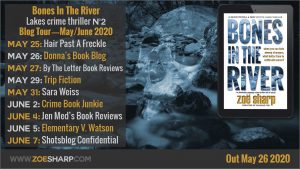 Bones in the River by Zoë Sharp.
Driving on a country road late at night,  you hit a child.  There are no witnesses.  You have everything to lose.  What do you do?  The traditional Appleby Horse Fair hosts the largest gathering of Gypsies and Travellers in Europe.  The sudden influx of more than 40,000 visitors into the small Lakeland town has always caused its share of problems, with strained relations between off-comers and locals.  But it’s also known as a good time to settle old scores.  This year, the Fair brings with it with the discovery of two bodies near the River Eden—one very recent and another a long time buried.  As CSI Grace McColl and Detective Nick Weston search for answers, old secrets are revealed, old wounds are reopened, and tensions threaten to erupt into violence.  While someone much closer to home is trying to get away with murder…


BONES IN THE RIVER, Book No2 in the Lakes crime thriller series featuring CSI Grace McColl and Detective Nick Weston, is published in mass-market paperback, eBook, hardcover, and Large Print editions on May 26 2020. For more info, visit www.ZoeSharp.com.

Read the first three chapters of BONES IN THE RIVER.
Posted by Ayo Onatade at 06:00

Thanks so much for inviting me to guest on the blog, Ayo. It was fun to explore the idea of taking the original book forwards into a series.