For the first time I have had to split my favourite reads this year into fiction and non fiction. This year I have read an eclectic range of non-fiction crime books and it has been great to see such a wide range of books being written. My favourite Non Fiction reads are as follows -

Agatha Christie's Poirot: The Greatest Detective in The World by Dr Mark Aldridge (HarperCollins Publishers) From the very first book publication in 1920 to the upcoming film release of Death on the Nile, this investigation into Agatha Christie's Hercule Poirot celebrates a century of probably the world's favourite fictional detective.This book tells his story decade-by-decade, exploring his appearances not only in the original novels, short stories and plays but also across stage, screen and radio productions. The hardback edition includes more than 400 illustrations. Poirot has had near-permanent presence in the public eye ever since the 1920 publication of The Mysterious Affair at Styles. From character development, publication history and private discussion concerning the original stories themselves, to early forays on to the stage and screen, the story of Poirot is as fascinating as it is enduring. Based on the author's original research, review excerpts and original Agatha Christie correspondence, Poirot: The Greatest Detective in the World is a lively and accessible history of the character, offering new information and helpful pieces of context, that will delight all Agatha Christie fans, from a new generation of readers to those already highly familiar with the canon.

Howdunit: A Masterclass in Crime Writing by Members of The Detection Club Edited by Martin Edwards (Collins Crime Club). Ninety crime writers from the world’s oldest and most famous crime writing network give tips and insights into successful crime and thriller fiction.  Howdunit offers a fresh perspective on the craft of crime writing from leading exponents of the genre, past and present. The book offers invaluable advice to people interested in writing crime fiction, but it also provides a fascinating picture of the way that the best crime writers have honed their skills over the years. Its unique construction and content mean that it will appeal not only to would-be writers but also to a very wide readership of crime fans. The principal contributors are current members of the legendary Detection Club, including Ian Rankin, Val McDermid, Peter James, Peter Robinson, Ann Cleeves, Andrew Taylor, Elly Griffiths, Sophie Hannah, Stella Duffy, Alexander McCall Smith, John Le Carré and many more. Interwoven with their contributions are shorter pieces by past Detection Club members ranging from G.K. Chesterton, Dorothy L. Sayers, Agatha Christie and John Dickson Carr to Desmond Bagley and H.R.F. Keating

Russian Roulette: The Life and Times of Graham Greene by Richard Greene (Little Brown) Probably the greatest British novelist of his generation, Graham Greene's own story was as strange and compelling as those he told of Pinkie the Mobster, Harry Lime, or the Whisky Priest. A restless traveller, he was a witness to many of the key events of modern history - including the origins of the Vietnam War, the Mau Mau Rebellion, the betrayal of the double-agent Kim Philby, the rise of Fidel Castro, and the guerrilla wars of Central America. Traumatized as a boy and thought a Judas among his schoolmates, Greene tried Russian Roulette and attempted suicide. He suffered from bipolar illness, which caused havoc in his private life as his marriage failed, and one great love after another suffered shipwreck, until in his later years he found constancy in a decidedly unconventional relationship. Often called a Catholic novelist, his works came to explore the no man's land between belief and unbelief. A journalist, an MI6 officer, and an unfailing advocate for human rights, he sought out the inner narratives of war and politics in dozens of troubled places, and yet he distrusted nations and armies, believing that true loyalty was a matter between individuals. A work of wit, insight, and compassion, this new biography of Graham Greene, the first undertaken in a generation, responds to the many thousands of pages of lost letters that have recently come to light and to new memoirs by those who knew him best. It deals sensitively with questions of private life, sex, and mental illness; it gives a thorough accounting for the politics of the places he wrote about; it investigates his involvement with MI6 and the Cambridge five; above all, it follows the growth of a writer whose works changed the lives of millions. 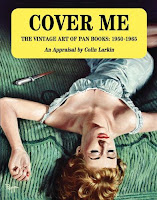 Cover Me The Vintage Art of Pan Books: 1950-1965 – An Appraisal by Colin Larkin (Telos)  An affectionate and thoroughly-researched celebration of the classic Pan Books paperbacks, beautifully illustrated with sumptuous full-colour reproductions of over 300 of the original cover artworks.

Detective in The Shadows: A Hard-Boiled History by Susanna Lee (John Hopkins University Press) Steadfast in fighting crime, but operating outside the police force―and sometimes even the law―is the private detective. Driven by his own moral code, he is a shadowy figure in a trench coat standing on a street corner, his face most likely obscured by a tilted fedora, a lit cigarette dangling from his hand. The hard-boiled detective is known by his dark past, private pain, and powers of deduction. He only asks questions―never answers them. In his stories he is both the main character and the narrator. America has had a love affair with the hard-boiled detective since the 1920s, when Prohibition called into question who really stood on the right and wrong side of the law. And nowhere did this hero shine more than in crime fiction. In Detectives in the Shadows, literary and cultural critic Susanna Lee tracks the evolution of this truly American character type―from Race Williams to Philip Marlowe and from Mike Hammer to Jessica Jones.Lee explores how this character type morphs to fit an increasingly troubled world, offering compelling interpretations of The Wire,True Detective, and Jessica Jones. Suddenly, in the present day, the hard-boiled detective wears his―or her―fatigue outwardly, revealing more vulnerability than ever before. But the detective remains resolute in the face of sinister forces, ever the person of honor. For anyone interested in crime fiction and television, or for those wanting to understand America's idolisation of the good guy with a gun.

From Aconite to the Zodiac Killer: The Dictionary of Crime by Amanda Lees (Little Brown). This is an indispensable guide for fans of true crime and crime fiction, whether in books, film or on TV, who want to look behind the crime, to understand the mechanics of an investigation, to walk in their favourite detectives' shoes and, most importantly, to solve the clues. To do that, one needs to be fluent in the language of the world of crime. We need to know what that world-weary DI is talking about when she refers to another MISPER. We have to immediately grasp the significance of the presence of paraquat, and precisely why it is still a poison of choice. If you want to know how many murders it takes for a killer to be defined as a serial killer, what Philip Marlowe means when he talks about being 'on a confidential lay' and why the 'fruit of a poisonous tree' is a legal term rather than something you should avoid on a country walk, this is the reference book you've been waiting for. It covers police and procedural terms and jargon of many different countries; acronyms; murder methods; criminal definitions, including different types of killers; infamous killers and famous detectives; notorious cases often referred to in crime fiction and true crime; gangster slang, including that of the Eastern European mafia; definitions of illegal drugs; weapons; forensic terminology; types of poisons; words and phrases used in major crime genres, including detective fiction, legal thrillers, courtroom dramas, hardboiled crime, Scandi and Tartan Noir, cosy crime and psychological thrillers; criminology terms; and the language of the courts and the legal systems of British, American, French, Nordic and other countries.

The Reacher Guy: The Authorised Autobiography of Lee Child by Heather Martin (Little Brown) The Reacher Guy as a compelling and authoritative portrait of the artist as a young man, refracted through the life of his fictional avatar, Jack Reacher. Through parallels drawn between Child and his literary creation, it tells the story of how a boy from Birmingham with a ferocious appetite for reading grew up to become a high-flying TV executive, before coming full circle and establishing himself as the strongest brand in publishing. Heather Martin explores Child's lifelong fascination with America, and shows how the Reacher novels fed and fuelled this obsession, shedding light on the opaque process of publishing a novel along the way. Drawing on her conversations and correspondence with Child over a number of years, as well as interviews with his friends, teachers and colleagues, she forensically pieces together his life, traversing back through the generations to Northern Ireland and County Durham, and following the trajectory of his extraordinary career via New York and Hollywood until the climactic moment when, in 2020, having written a continuous series of twenty-four books, he finally breaks free of his fictional creation.

Southern Cross by Craig Sisterton (No Exit Press) Southern Cross Crime is the first comprehensive guide to modern Australian and New Zealand crime writing. From coastal cities to the Outback, leading critic Craig Sisterson showcases key titles from more than 200 storytellers, plus screen dramas ranging from Mystery Road to Top of the Lake. Fascinating insights are added through in-depth interviews with some of the prime suspects who paved the way or instigated the global boom, including Jane Harper, Michael Robotham, Paul Cleave, Emma Viskic, Paul Thomas, and Candice Fox.

Unspeakable Acts: True Tales of Crime, Murder, Deceit, and Obsession by Sarah Weinman (Ecco) The appeal of true-crime stories has never been higher. With podcasts like My Favorite Murder and In the Dark, bestsellers like I'll Be Gone in the Dark and Furious Hours, and TV hits like American Crime Story and Wild Wild Country, the cultural appetite for stories of real people doing terrible things is insatiable. Sarah Weinman brings together an exemplary collection of recent true crime tales. She culls together some of the most refreshing and exciting contemporary journalists and chroniclers of crime working today. Michelle Dean's "Dee Dee Wanted Her Daughter To Be Sick" went viral when it first published and is the basis for the TV show The Act and Pamela Colloff's "The Reckoning," is the gold standard for forensic journalism. There are 13 pieces in all and as a collection, they showcase writing about true crime across the broadest possible spectrum, while also reflecting what makes crime stories so transfixing and irresistible to the modern reader.