The Return of Angel 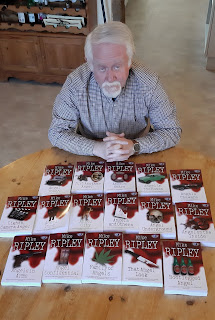 Telos Publishing have reissued all 16 of Mike Ripley’s ‘Angel’ books as B-format paperbacks. The fifteen novels were first published between 1988 and 2008, with a collection of short stories following a few years later.

‘It is a fantastic boost to an author to realise that his early work is still being read after more than thirty years,’ said Ripley (aka The Ripster), ‘and is the only thing which has kept me going during lockdown. Well, that and the fact that my Italian wine merchant still delivers...’

As well as being the author of the incredibly well received monthly Getting Away With Murder (GAWM) column on the Shots website, Mike Ripley is the author of the Angel series of comedy thrillers set mainly in London and Essex.

He won the Crime Writers Association Last Laugh Award for humorous crime for Angel Touch in 1989 and again in 1991 for Angels in Arms. Angel has been described as being a trumpet playing thirty-something year old layabout and sometime private eye. He drives around in a his trusty delicensed black Austin FX45 cab which he named Armstrong and has a black cat called Springsteen and a sleeping bag he refers to as Hemmingway.

Fitzroy Maclean Angel gets by partly through gigging as a jazz trumpet player, partly through taking illegal fares in his de-registered black taxi cab, and partly by various other means.

Welcome back. (I assume Angel doesn't approve of Uber?)