Katharina Bielenberg, Publisher at MacLehose Press, has acquired World English Language rights to the sixth and final instalment in Åsa Larsson’s hugely popular Rebecka Martinsson series. The Sins of our Fathers will be published on 30 March 2023 in hardback and e-book, in a translation by Frank Perry.

Katharina Bielenberg says, “Her many readers worldwide have waited long for Åsa Larsson’s next instalment, and without doubt it is her best yet. Gripping and vivid, with layer upon layer of human interest – I was thrilled and profoundly moved by The Sins of Our Fathers, a knock-out finale to a ground-breaking series.”

Åsa Larsson’s literary agent, Astri von Arbin Ahlander at the Ahlander Agency says, “The Sins of Our Fathers wraps up a milestone crime series, nearly two decades in the making. With the books about Rebecka Martinsson, Åsa Larsson has not only written beloved novels, she has fundamentally changed the expectations of what suspense literature can be. I am so incredibly honoured and humbled to have had the opportunity to witness a piece of literary history being made.”

Åsa Larsson says, “Saying farewell to Rebecka Martinsson contains a multitude of emotions. I am of course incredibly grateful. My fate – if she had not stepped in – would have been to make a living as a tax lawyer. Thanks to her, I was able to provide for myself and my children through my writing. I have friends that I would have never even met if it wasn’t for her. She has given me a life and a context that I, growing up in the mining town of Kiruna 200 kilometers north of the arctic circle, never could have dreamed about.”

MacLehose Press is planning to bring Åsa Larsson to the UK next year to celebrate – and mourn – the final instalment in the Rebecka Martinsson series. 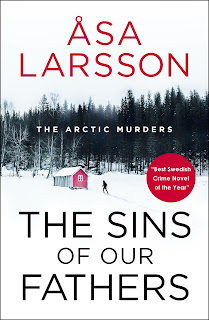 Forensic pathologist Lars Pohjanen has only a few weeks to live when he asks Rebecka Martinsson to investigate a murder that has long since passed the statute of limitations. A body found in a freezer at the home of the deceased alcoholic, Henry Pekkari, has been identified as a man who disappeared without a trace in 1962: the father of Swedish Olympic boxing champion Boerje Stroem. Rebecka wants nothing to do with a fifty-year-old case - she has enough to worry about. But how can she ignore a dying man's wish?When the post-mortem confirms that Pekkari, too, was murdered, Rebecka has a red-hot investigation on her hands. But what does it have to do with the body kept in his freezer for decades? Meanwhile, the city of Kiruna is being torn down and moved a few kilometres east, to make way for the mine that has been devouring the city from below. With the city in flux, the tentacles of organized crime are slowly taking over . . .