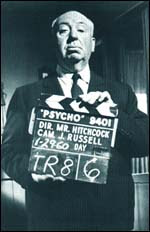 IT appears that Alfred Hitchock is the platte du jour. In a previous blog I mentioned that they there is a film about to go into production with Hitchcock as a character set in 1922 at the time he was making Number 13, a rare film in that he did not complete it. Now director Ryan Murphy (the bloody awful Running with Scissors) is to make Alfred Hitchcock Presents, a drama about the making of Hitchcock's Psycho, and particularly the hurdles that the great British director (possibly to be played by Anthony Hopkins) went through in order to bring it come to fruition. Hitchcock was discouraged left. right and centre from making it. The script was seen as way too dark and perverse (especially with the lead female star getting killed off after 45 minutes), and no one wanted to see a movie based more or less on the macabre exploits of serial killer Ed Gein.
Hopkins has played his share of famous men -- Pablo Picasso, Richard Nixon, John Quincy Adams, Dr. John Harvey Kellogg -- and he's planning to portray Leo Tolstoy in Michael Hoffman's The Last Station. But I would have thought a better candidate would be Timothy Spall. Not just that he and Hitch are of the same size but Spall could bring in that particular quirkiness needed for the character.
Movies about movies don’t fare particularly well. Mind you, there are the odd exceptions: and Singin’ in the Rain springs to mind. Universal, Hitchcock's home studio for the last 15 or so years of his life, may be involved as a financier-distributor.
If and when it happens, the plan is for Helen Mirren to play Alma Reville, Hitchcock's wife and lifelong creative collaborator. Psycho was shot for Paramount, although Universal founder and Hitchcock confidante Lew Wasserman occupies a portion of the script. Psycho costars Anthony Perkins and Janet Leigh are also "characters," but not large ones. Presumably screenwriter Joseph Stefano will also figure in. And I wonder if the script will cover the unethical means by which the film rights were secured from Robert Bloch, who allegedly was cheated out of a lot of money.
Posted by Mike Stotter at 11:11

Email ThisBlogThis!Share to TwitterShare to FacebookShare to Pinterest
Labels: Psycho

Anthony Hopkins certainly is an actor who is much in demand even for his age. I don't think retiring would keep him out of movies because he would still be in demand. His price will simply shoot up. He has played many historical figures before and it wouldn't be a surprise for him to play another one. He's going to play Leo Tolstoy in the movie, The Last Station.