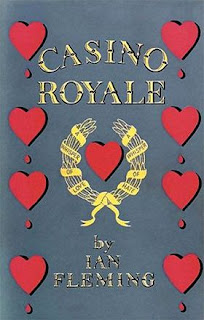 A first edition of CASINO ROYALE, the first James Bond novel, is expected to fetch at least GBP10,000 ($19,600) when it goes up for sale at an auction in London.
The first edition of the Ian Fleming novel, which was published in 1953, is still in its original dust jacket and has its owner's name and the bookseller's stamp inside the front cover. Roddy Newlands of London's Bloomsbury Auctions, who are selling the book, believes interest in Ian Fleming first editions has rocketed since Daniel Craig starred in Casino Royale last year (06). Discussing the book's appeal, he says, "It is an exceptionally important book because it is the first. If the book was in better condition it could make up to GBP15,000." The book will go under the hammer next week (15FEB07).

And in a neat segue, this leads to the news (old for some) that a new original James Bond literary adventure is being planned for release in 2008 to coincide with the centenary of 007 novelist Ian Fleming's birth. Rights holders Ian Fleming Publication are said to be lining up for a big name author to take on the task.
"To celebrate the centenary of Ian Fleming's birth in 2008 we are looking at a wide range of different activities and one of those is a new adult Bond novel", said Zoe Watkins of Ian Fleming Publications in a recent Scotsman interview. "We are still in the planning stages, but at the moment the idea would be to have it done by an established author - potentially a big name."

The newspaper report speculated big name favorites to be approached could include British thriller writer Lee Child, spy novelist John le Carré and The Day of the Jackal author Frederick Forsyth. Not Peter Guttridge, then? Those who have tackled the Fleming mantle so far include Kingsley Amis, John Gardner and Raymond Benson. Apart from Lee, and no disrespect to le Carré, or Forsyth, I would have the feeling that they will go with a "younger name", plus a recognisable one who can carry on the series.

Zoe Watkins added: "The literary Bond is something we want to focus on and any work would have to be in keeping with the literary aspects of the books. If it was successful there could be scope for further novels."
Posted by Mike Stotter at 16:12